U. CHICAGO (US) — Scholars have completed a dictionary that offers insight into the lives—taxes, work, and marriage—of people in ancient Egypt.

The ancient language is Demotic Egyptian, a name given by the Greeks to denote it was the tongue of the demos, or common people. It was written as a flowing script and was used in Egypt from about 500 B.C. to 500 A.D., when the land was occupied and usually dominated by foreigners, including Persians, Greeks, and Romans. 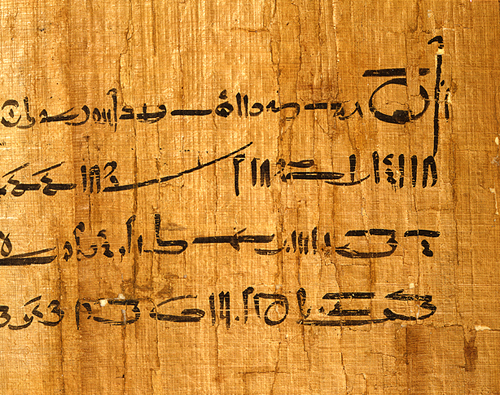 This marriage annuity, written in the Demotic Egyptian language, provides information on how a husband agrees to provide for his wife. The flowing script was used in Egypt from about 500 B.C. to 500 A.D. (Credit: Oriental Institute Museum) 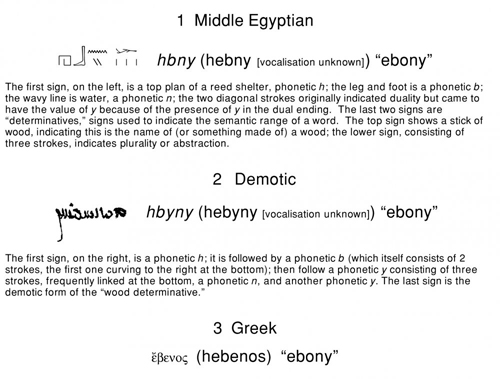 This illustration traces the evolution of the word ebony through the Middle Egyptian, Demotic and Greek languages. (Credit: Oriental Institute Museum)

The language lives on today in words such as adobe, which came from the Egyptian word for brick. The word moved through Demotic, on to Arabic and eventually to Spain during the time of Islamic domination there, explains Janet Johnson, editor of the Chicago Demotic Dictionary.

Ebony, the dark wood that was traded down the Nile from Nubia (present-day Sudan), also comes from Demotic roots. The name Susan is indirectly related to the Demotic word for water lily.

“Demotic was used for business and legal documents, private letters, and administrative inscriptions, and literary texts, such as narratives and pieces of wisdom literature,” says Johnson, a professor at the University of Chicago’s Oriental Institute.

“It was also used for religious and magical texts as well as scientific texts dealing with topics such as astronomy, mathematics and medicine. It is an indispensible tool for reconstructing the social, political, and cultural life of ancient Egypt during a fascinating period of its history,” she continues.

“This dictionary will be very useful, as there are more unpublished documents in Demotic than any other phase of ancient Egyptian,” says James Allen, a professor at Brown University and University of Chicago PhD graduate.

The Demotic language was one of the three texts on the Rosetta stone, which was also written in Egyptian hieroglyphs and Greek. In addition to being used on stone carvings, the script was left behind on papyrus and broken bits of pottery.

“Before Demotic, Egyptians developed a script form of hieroglyphs called hieratic; Demotic evolved from that. Because it was cursive, it was much easier and faster to use than were the elaborate pictures of the hieroglyphs,” says Johnson.

The script was particularly useful as a means of conducting everyday business, such as paying taxes.

“People would write the information down on potsherds and put them in the basement, much as we keep track today of our income tax records by keeping copies of our past returns,” Johnson adds.

Johnson has worked with Demotic since she was a graduate student at the Oriental Institute. The advent of computer technology facilitated the assembly of the Demotic Dictionary, which unlike its older sister, the Chicago Assyrian Dictionary, could be organized electronically rather than on index cards.

Scholars at the Oriental Institute are also working on a dictionary of Hittite, a language once spoken in Anatolia (present-day Turkey).

“The last four decades have seen a real explosion of Demotic studies, with more scholars focusing on this material, and great leaps in our understanding of this late version of the Egyptian language,” says Gil Stein, director of the Oriental Institute. “The Chicago Demotic Dictionary is reaching completion at the perfect time to have an enormous impact on our understanding of Egyptian civilization in the final few centuries, when it still flourished as a vibrant and unique culture.

“The Chicago Demotic Dictionary provides the key to understanding the vast body of Demotic contracts, letters, tax records and other documents; this allows us to hear the voices of the people who made up the vast majority of Egyptian society during the period when they were under first Greek and then Roman rule.”

The work began in 1975 as a supplement and update to Wolja Erichsen’s Demotisches Glossar, published in 1954. The dictionary is based on texts in Demotic that were published by scholars from 1955 to 1979, and lists new words not included in Erichsen’s work as well as new uses of words included there.

The words are listed in the dictionary with references to how they were used in documents.

The use of computers helped speed the process of preparing the dictionary because it allowed scholars to reproduce the cursive script of Demotic electronically and add information in Roman fonts. By providing photographs, or facsimiles of the script, the dictionary provides an exact representation of the way people wrote the language.

The final entry for “S” has been completed, and 24 other letters are online. Eventually there will be a published dictionary primarily for university libraries.

How men and women lived

Much of Johnson’s own work deals with scholarship on women who lived during a period of transition in Egyptian society. Although the rulers in the classical worlds of Rome and Greece frequently minimized the role of women in their cultures, the Egyptians had an idea much closer to equality of the sexes.

On a wall in the Oriental Institute Museum, for instance, is a papyrus scroll on display bearing the text of an annuity written in Demotic. Annuities were written by a husband to a wife to acknowledge money she had brought into marriage and also guaranteeing to provide a set amount of food plus money for clothing for her use each year during their marriage.

The documents in Demotic show that people during the period continued the respect for women that had been typical of earlier times in Egyptian history. Women could own property, for instance, and also had the right to divorce their husbands.

Another Demotic scholar at the Oriental Institute is Brian Muhs, who has worked on tax records written in demotic, both official government tax records, and tax receipts issued to taxpayers.

Authorities conducted censuses, which were used to collect taxes with different rates for men and women; compulsory labor requirements for men only, such as digging ditches; and professional taxes for people practicing a profession. There were sales taxes and taxes collected as grain from harvests.

“The government often leased the collection of taxes to the highest bidder, who was required to pay the amount of the bid to the government regardless of how much tax they collected,” says Muhs, associate professor at the Oriental Institute.

The preserved literature tells stories of human drama, with consequences in the afterlife of rewards for the righteous and punishment for the sinful.

The literature also has proverbs rich with folk wisdom, carried in instructions that are left on papyrus. They provide insights in the way people were expected to behave. “Do not sit down before a dignitary,” the instructions caution, for instance.

Other examples of common sense include: “Pride and arrogance are the ruin of their owner”; “Do not sit or stand still in an undertaking which is urgent”; and “Money is the snare the god has placed on earth for the impious man so that he should worry daily.”

Friedhelm Hoffmann of the Institute for Egyptology at the University of Munich said: “The Demotic texts play a crucial role in providing the necessary insights into the time when the classical world of Greece and Rome had close contacts to the Egyptian culture.

“I myself have been using the Chicago Demotic Dictionary since the first letters were published, not only for looking up words and but also finding their meaning,” Hoffmann adds.

The publication of the dictionary has doubled the number of words known in Demotic, and subsequent translations and publications will produce even more, Hoffmann says.