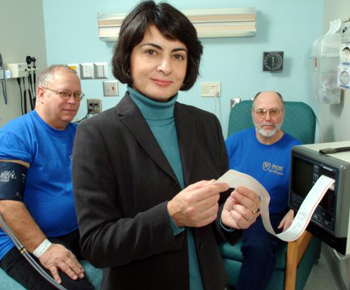 Viola Vaccarino led a study examining the contribution of genetics to the link between depression and heart disease.

EMORY (US)—Depression tends to reduce coronary flow reserve, resulting in a greater risk of heart disease for people who suffer from it, according to a new study. The findings also suggest genetic susceptibility influences which individuals have an increased risk.

Researchers at Emory University School of Medicine, led by Viola Vaccarino, professor of medicine (cardiology), and director of the Emory Program in Cardiovascular Outcomes Research and Epidemiology, studied identical and fraternal twins, to clarify the contribution of genetics to the link between depression and heart disease. The results were published in the Oct. 12 issue of Archives of Internal Medicine.

The study included 68 pairs of twins where one twin had major depression and the other did not, seven pairs where both were depressed, and 105 depression-free pairs. All of the subjects were male Vietnam-era veterans. Coronary flow reserve was 14 percent lower in fraternal twins with major depression than in their brothers who were not depressed.

The study also found that depression may contribute to heart disease risk by affecting the microscopic blood vessels in the heart, rather than the larger arteries that are the focus of procedures such as angioplasty and bypass surgery.

Coronary flow reserve is a comparison of blood flow through the heart at rest and under stress, measured with positron emission tomography.

“Coronary flow reserve reflects the ability of small arteries in the heart to relax and dilate in response to increased demand for blood,” Vaccarino says. “In daily life, this is how the heart responds to exercise. But in our research, we use the drug adenosine because the body’s ability to handle exercise varies from person to person.”

Poor function of the heart’s small arteries has been linked to atherosclerosis and poor heart disease prognosis in previous studies, Vaccarino says.

Problems with these blood vessels may come from processes such as inflammation and oxidative stress, Her group’s research has identified genes involved in inflammation that influence both depression and heart disease risk.

The study was limited because it only examined middle-aged men, Vaccarino says. Depression is especially common in younger women with heart disease, so future genetic research on depression and heart disease will include them.

The research was supported by the National Institutes of Health, the Department of Veterans Affairs, and the American Heart Association.