U. MELBOURNE (AUS) — Bone deformities on the fossilized remains of giant dolphin-like reptiles are similar to those human divers develop as a result of changes in body pressure.

Ichthyosarians first appeared about 245 million years ago. The findings suggest the reptiles likely suffered from a version of “the bends.”

The new analysis by John Hayman, an associate professor of pathology at the University of Melbourne, explains what may have caused the bone lesions. 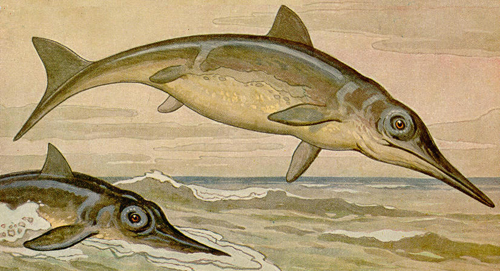 That research argues the scarring may be the result of deep diving and spending too long at depth, causing excess nitrogen to be dissolved in the body, and not from quick ascents as previously thought. Hayman reports details in the latest edition of the journal Naturwissenschaften: Science of Nature.

“Ichthyosarians probably evolved the ability to dive deeper and to remain at depth for longer periods,” says Hayman.

“An alternative explanation is that the reptiles developed decompression sickness from being trapped in shallow water by predators.

“It wasn’t from sudden and rapid ascents,” he adds.

The dangerous practice of deep sea diving wouldn’t have affected the replites’ long-term survival because any ill effects would have developed later in life, says Hayman.

The new analysis was possible because structure of modern humans’ necks are very similar to the prehistoric reptiles.

“The arterial blood supply to the humerus and other bones such as the neck of the femur is highly conserved. It has remained much the same for 250 million years.”