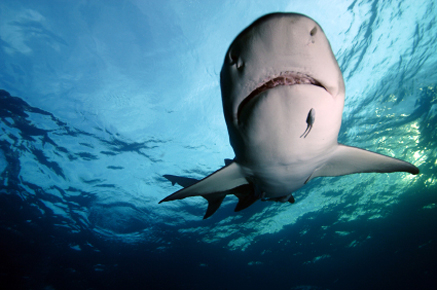 “Every time we investigate a shark attack one of the pieces of information that we want to have is what species was involved and what size it was,” says George Burgess, director of the International Shark Attack File at the University of Florida’s Museum of Natural History. He says scientists can now say with a degree of certainty whether the beast was a 14-foot tiger shark or a 9-foot bull shark.

U. FLORIDA (US)—Hit-and-run attacks by sharks can be solved with forensics that identify the culprits by the unique chomp they put on their victims, similar to using fingerprints to solve a crime.
George Burgess, a University of Florida researcher and director of the International Shark Attack File at the University of Florida’s Museum of Natural History, says comparing bites to the jaws and teeth of sharks can lead to precise identifications.

“Every time we investigate a shark attack one of the pieces of information that we want to have is what species was involved and what size it was,” he explains.

“Because I’ve been looking at shark attack victims for 30 years I can estimate what did the damage, but I have never been able to actually prove it.”

Burgess, who collaborated with researchers at the University of South Florida, says scientists can now say with a degree of certainty whether the beast was a 14-foot tiger shark or a 9-foot bull shark, a distinction that has unforeseen emotional, ecological, and even monetary benefits.

Their findings are published in the November issue of Marine Biology.

Because of the hype surrounding shark attacks, off-the-cuff estimates of shark size are often exaggerated, he says.

“This will give an actual basis for determining what species was involved and the size.”

Using dried shark jaws from museums and private collections, the researchers were able to identify bite patterns of particular sizes and species of sharks by measuring jaw circumference and the distance between the six frontal teeth on the top and lower jaws, Burgess explains.

They experimented on 10 to 24 sets of shark jaws for each of the 14 species they analyzed.

The technique works not only on human and animal tissue, but also on inanimate objects like surfboards and underground cable lines, he says.

The ability to make predictions from bite patterns is important to understanding the behavioral underpinnings of shark attacks and their prey habits, says lead researcher Dayv Lowry, a biologist with the Washington Department of Fish and Wildlife.

“Often someone will send us a picture of a dolphin carcass or a sea turtle and want to know what kind of shark bit it,” Lowry says.

“Knowing that it’s a large tiger shark, for example, would help us figure out what large tiger sharks like to eat and how they attack their prey. If an animal or person has been bitten on the rear end, then we know these sharks are likely to sneak up to get their prey instead of facing the victims.”

Being able to determine what size shark attacked people in certain geographic areas such as South Africa where offshore nets are used to protect swimmers is valuable because it may influence the size mesh that is used, Lowry explains.

With larger sharks, beaches can get by with bigger mesh sizes, which are cheaper and less environmentally intrusive.

The technique also has the potential to save thousands of dollars in damages caused by the sharks’ penchant for attacking underwater electronic equipment, which includes intercontinental telephone wires, top-secret communication lines between government officials, and sensors companies use to uncover oil fields, Burgess says.

Sharks are equipped with organs on the underside of their snouts—gel filled pits called ampullae of Lorenzini—that allow them to detect electromagnetic fields from their intended food, Burgess explains.

Unfortunately, sharks often do not distinguish between the signals sent by prey and equipment, which can be ruined by water seeping in through the bite marks.

“That’s one thing that makes them special—they can sense electro-magnetic fields around their prey items,” he says.

Laying cable lines at the bottom of the ocean is extremely expensive, and having to remove a piece, fix it, and install it again adds to the cost, Burgess says.

“Knowing that a certain species of shark did the damage is useful because in the future cable lines can be placed in a different location, outside the path of that particular shark’s area of distribution.”

And the ability to determine what size shark was involved in an attack by the size and configuration of its bite marks could result in the installation of a heavier seal designed to withstand damage from that kind of shark, he concludes.

The researchers received funding from the National Marine Fisheries Service, the Porter Family Foundation, the University of Florida, and Florida Museum of Natural History.

Sharks are disappearing from the world’s oceans

HIV may not raise risk of cavities in children