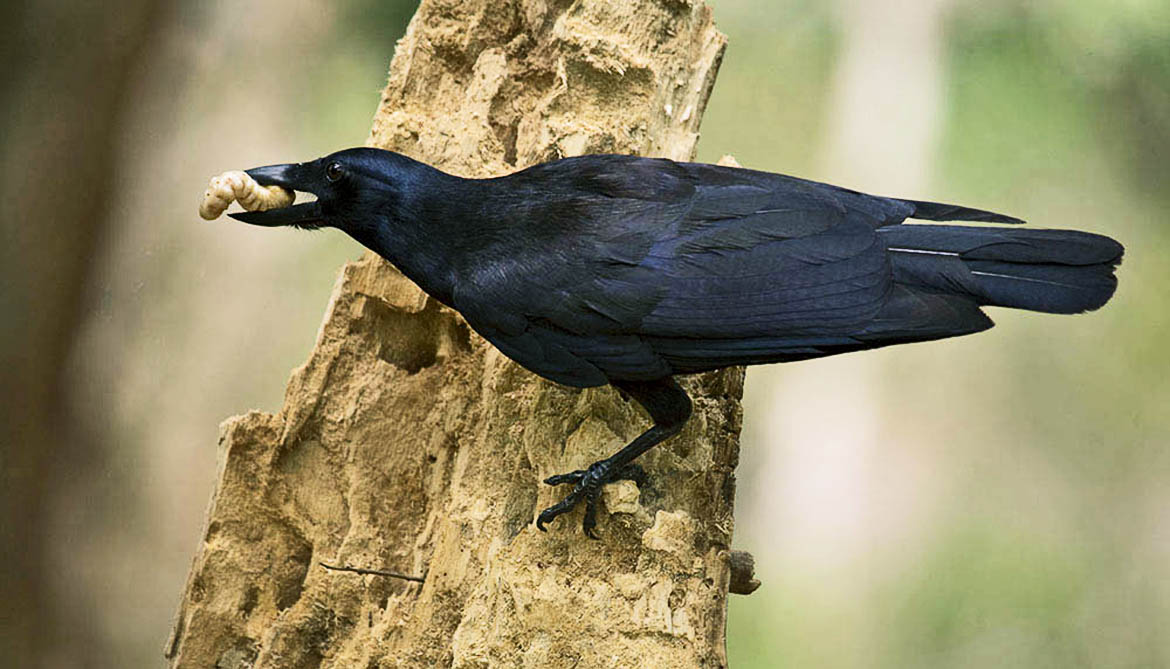 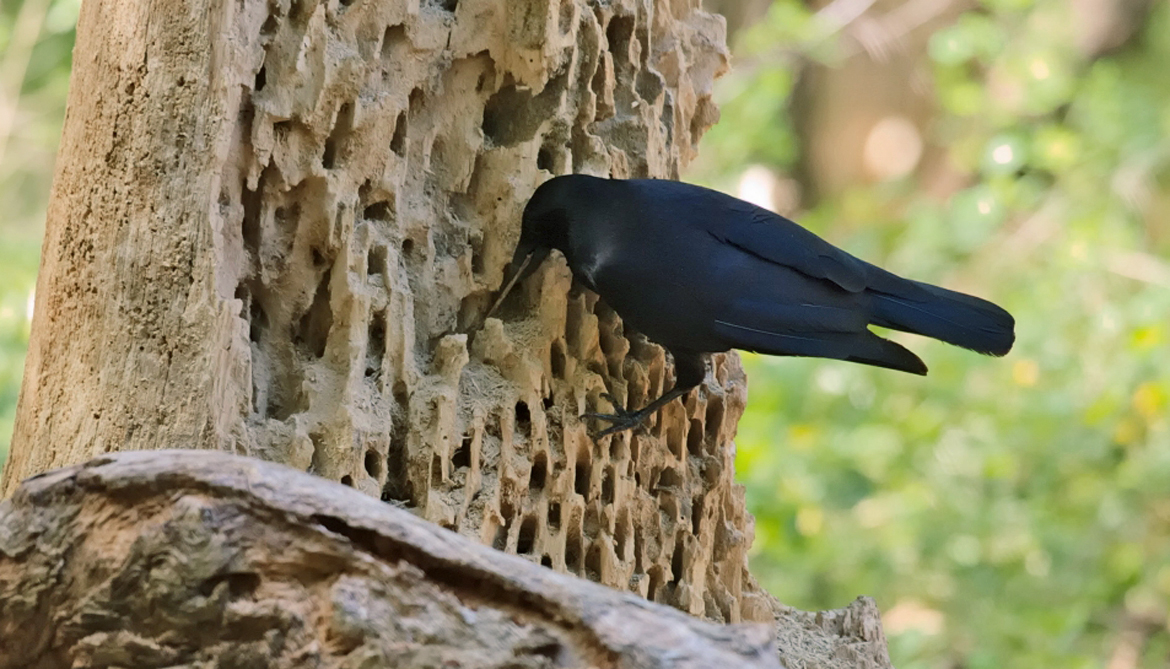 In Aesop’s fable about the crow and the pitcher, a thirsty bird finds a vessel of water, but when he tries to drink from it, he finds that the water level is too low. Not strong enough to knock over the pitcher, the bird drops pebbles into it—one at a time—until the water level rises enough for him to drink his fill.

Highlighting the value of ingenuity, the fable demonstrates that cognitive ability can often be more effective than brute force. It also characterizes crows as pretty resourceful problem solvers.

New research conducted by University of California, Santa Barbara’s Corina Logan and collaborators proves the birds’ intellectual prowess may be more fact than fiction. The findings appear in PLOS ONE.

“We showed that crows can discriminate between different volumes of water and that they can pass a modified test that so far only 7- to 10-year-old children have been able to complete successfully,” says Logan, who is lead author of the paper.

“We provide the strongest evidence so far that the birds attend to cause-and-effect relationships by choosing options that displace more water.”

Logan, a junior research fellow at UCSB’s SAGE Center for the Study of the Mind, worked with New Caledonian crows in a set of small aviaries in New Caledonia run by the University of Auckland.

“We caught the crows in the wild and brought them into the aviaries, where they habituated in about five days,” she says. Keeping families together, they housed the birds in separate areas of the aviaries for three to five months before releasing them back to the wild.

“So I thought, let’s pretend the sky’s the limit and I can train them to do whatever I want,” Logan says. “I started by pointing at the one I wanted and continuing to point until he or she flew out. I got to the point where I could stand outside the aviary and point at the one I wanted and it would fly out while the other birds stayed put.”

Two birds in particular—007 and Kitty—became so well trained that Logan had only to call them by name and they’d fly into the testing room.

The testing room contained an apparatus consisting of two beakers of water, the same height, but one wide and the other narrow. The diameters of the lids were adjusted to be the same on each beaker.

“The question is, can they distinguish between water volumes?” Logan says. “Do they understand that dropping a stone into a narrow tube will raise the water level more?”

In a previous experiment by Sarah Jelbert and colleagues at the University of Auckland, the birds had not preferred the narrow tube. However, in that study, the crows were given 12 stones to drop in one or the other of the beakers, giving them enough to be successful with either one.

“When we gave them only four objects, they could succeed only in one tube—the narrower one, because the water level would never get high enough in the wider tube; they were dropping all or most of the objects into the functional tube and getting the food reward,” Logan explains. “It wasn’t just that they preferred this tube, they appeared to know it was more functional.”

However, she notes, we still don’t know exactly how the crows think when solving this task. They may be imagining the effect of each stone drop before they do it, or they may be using some other cognitive mechanism. “More work is needed,” Logan says.

Logan also examined how the crows react to the U-tube task. Here, the crows had to choose between two sets of tubes. With one set, when subjects dropped a stone into a wide tube, the water level raised in an adjacent narrow tube that contained food.

This was due to a hidden connection between the two tubes that allowed water to flow. The other set of tubes had no connection, so dropping a stone in the wide tube did not cause the water level to rise in its adjacent narrow tube.

Each set of tubes was marked with a distinct color cue, and test subjects had to notice that dropping a stone into a tube marked with one color resulted in the rise of the floating food in its adjacent small tube.

“They have to put the stones into the blue tube or the red one, so all you have to do is learn a really simple rule that red equals food, even if that doesn’t make sense because the causal mechanism is hidden,” says Logan.

As it turns out, this is a very challenging task for both corvids (a family of birds that includes crows, ravens, jays, and rooks) and children. Children ages 7 to 10 were able to learn the rules, as Lucy Cheke and colleagues at the University of Cambridge discovered in 2012. It may have taken a couple of tries to figure out how it worked, Logan notes, but the children consistently put the stones into the correct tube and got the reward (in this case, a token they exchanged for stickers).

Children ages 4 to 6, however, were unable to work out the process. “They put the stones randomly into either tube and weren’t getting the token consistently,” she says.

Recently, Jelbert and colleagues from the University of Auckland put the New Caledonian crows to the test using the same apparatus the children did. The crows failed.

So Logan and her team modified the apparatus, expanding the distance between the beakers. And Kitty, a six-month-old juvenile, figured it out.

“We don’t know how she passed it or what she understands about the task,” Logan says, “so we don’t know if the same cognitive processes or decisions are happening as with the children, but we now have evidence that they can. It’s possible for the birds to pass it.

“What we do know is that one crow behaved like the older children, which allows us to explore how they solve this task in future experiments,” she continues. Research on causal cognition using the water displacement paradigm is only beginning to get at what these crows know about solving problems. This series of experiments shows that modifying previous experiments is useful for gaining a deeper understanding.

The research on the crows is part of a larger project Logan is working on to compare the cognitive powers of crows with those of grackles.

“So far, no smaller-brained species have been tested with the tests we use on the crows, and grackles are smaller-brained,” she says. “But they’re really innovative. So they may have a reason to pay attention to causal information like this.”

The next research phase will begin next month, after the grackles’ breeding season ends and they are ready to participate.

When it comes to color, hummingbirds rule the roost