Researchers at the University of Leeds have used a bacterium that “eats” iron to create a surface of magnets, similar to those found in traditional hard drives, and wiring. As the bacterium ingests the iron it creates tiny magnets within itself. 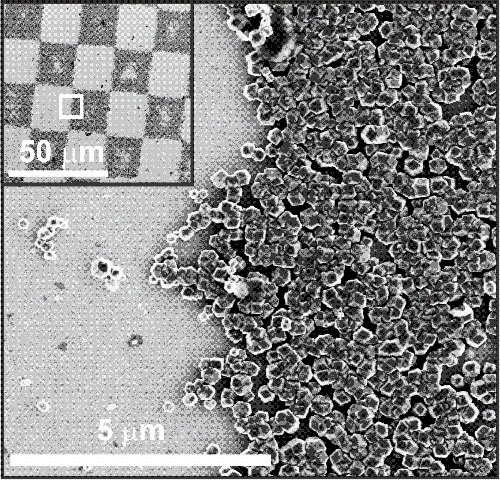 In a process akin to potato-printing, but on a much smaller scale, this protein is attached to a gold surface in a checkerboard pattern and placed in a solution containing iron. (Credit: U. Leeds)

The team has also begun to understand how the proteins inside these bacteria collect, shape, and position these “nanomagnets” inside their cells. As reported in the journal Small, the researchers can now replicate this behavior outside the bacteria.

Led by Sarah Staniland from the School of Physics and Astronomy, in a longstanding collaboration with the Tokyo University of Agriculture and Technology, the team hopes to develop a “bottom-up” approach for creating cheaper, more environmentally friendly electronics of the future.

“We are quickly reaching the limits of traditional electronic manufacturing as computer components get smaller. The machines we’ve traditionally used to build them are clumsy at such small scales. Nature has provided us with the perfect tool to circumvent this problem,” says Staniland.

The magnetic array was created by doctoral student Johanna Galloway, who used a protein that creates perfect nanocrystals of magnetite inside the bacterium Magnetospirillum magneticum.

In a process akin to potato-printing, but on a much smaller scale, this protein is attached to a gold surface in a checkerboard pattern and placed in a solution containing iron.

At a temperature of 80 degrees Celsius, similarly sized crystals of magnetite form on the sections of the surface covered by the protein. The researchers are now working to reduce the size of these islands of magnets, in order to make arrays of single nanomagnets.

They also plan to vary the magnetic materials that this protein can control. These next steps would allow each of these nanomagnets to hold one bit of information allowing the construction of better hard drives.

“Using today’s ‘top-down’ method—essentially sculpting tiny magnets out of a big magnet—it is increasingly difficult to produce the small magnets of the same size and shape which are needed to store data,” says Galloway.

“Using the method developed here at Leeds, the proteins do all the hard work; they gather the iron, create the most magnetic compound, and arrange it into regularly-sized cubes.”

While temporarily at Leeds from Tokyo University of Agriculture and Technology, Masayoshi Tanaka has used a different protein to create tiny electrical wires.

These “nanowires” are made of “quantum dots”—particles of copper indium sulphide and zinc sulphide that glow and conduct electricity—and are encased by fat molecules, or lipids.

The magnetic bacteria contain a protein that molds mini compartments for the nanomagnets to be formed in using the cell membrane lipids. Tanaka used a similar protein to make tubes of fat containing quantum dots—biological-based wiring.

“It is possible to tune these biological wires to have a particular electrical resistance. In the future, they could be grown connected to other components as part of an entirely biological computer,” says Tanaka, whose approach is also reported in Small.

The research group and the team in Japan led by Tadashi Matsunaga now plan to examine the biological processes behind the behavior of these proteins. “Our aim is to develop a toolkit of proteins and chemicals which could be used to grow computer components from scratch,” adds Staniland.