U. MELBOURNE (AUS) — A 3D simulation of the complete human rhinovirus may pave the way for the development of new drugs to combat the common cold.

Rhinovirus infection is linked to about 70 percent of all asthma exacerbations with more than 50 percent of these patients requiring hospitalization. Furthermore, over 35 percent of patients with acute chronic obstructive pulmonary disease (COPD) are hospitalized each year due to respiratory viruses including rhinovirus.

A new antiviral drug to treat rhinovirus infections that is being developed by Melbourne company Biota Holdings, Ltd., is targeted for those with these existing conditions where the common cold is a serious threat to their health and could prove fatal. 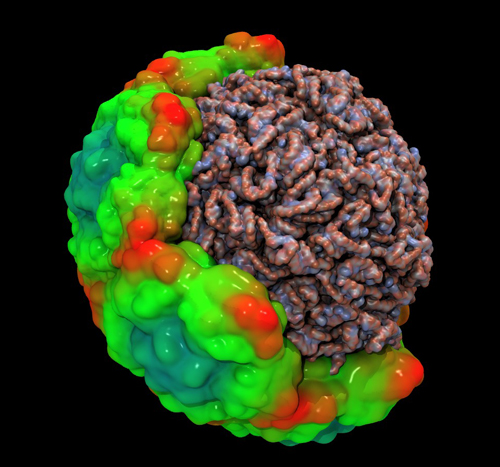 A team of researchers led by Michael Parker from St Vincent’s Institute of Medical Research (SVI) and the University of Melbourne is now using information on how the new drug works to create a 3D simulation of the complete rhinovirus using Australia’s fastest supercomputer.

“Our recently published work with Biota shows that the drug binds to the shell that surrounds the virus, called the capsid. But that work doesn’t explain in precise detail how the drug and other similar acting compounds work,” Parker says.

Parker and his team are working on the newly installed IBM Blue Gene/Q with computational biologists from IBM and the Victorian Life Sciences Computation Initiative (VLSCI).

The IBM Blue Gene/Q is the most powerful supercomputer dedicated to life sciences research in the Southern Hemisphere and currently ranked the fastest in Australia.

“The IBM Blue Gene/Q will provide us with extraordinary 3D computer simulations of the whole virus in a time frame not even dreamt of before,” Parker says.

“Supercomputer technology enables us to delve deeper in the mechanisms at play inside a human cell, particularly how drugs work at a molecular level. This work offers exciting opportunities for speeding up the discovery and development of new antiviral treatments and hopefully save many lives around the world.”

Researchers have previously only been able to run smaller simulations on just parts of the virus.

More news from the University of Melbourne: http://newsroom.melbourne.edu/

To beat a virus, find its ‘pocket factor’