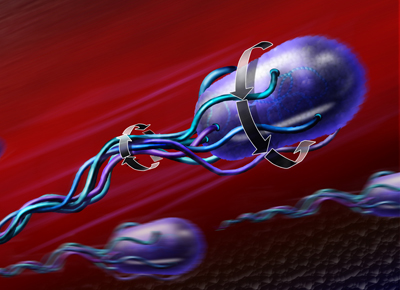 NYU—A recent findings could lead to antibiotics that target Rho, a key regulatory protein in E. coli and many other bacteria.

The study by researchers at the NYU Langone Medical Center—published in Nature—reveals a new paradigm to understand the molecular principles of gene transcription.

Rho, discovered in 1969, is the first transcription termination factor described in bacteria and other organisms. It acts as a red light to gene transcription and is essential for survival in many bacterial species. But the actual mechanism by which it works has been unknown. 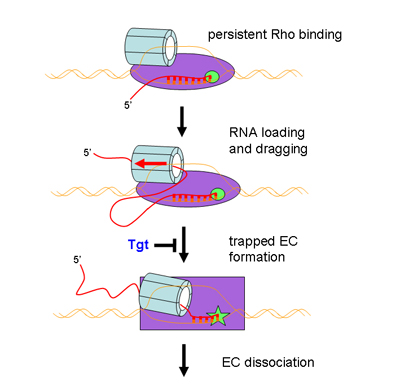 The molecular pathway to Rho termination, as seen in a recent issue of Nature. (Courtesy: NYU Langone Medical Center)

It was postulated that Rho loads onto RNA at a specific site and then translocates along the nascent transcript in pursuit of the moving RNA polymerase that is in the process of RNA synthesis. Once the RNA polymerase is paused, Rho has the chance to catch up and terminate transcription.

In the new study, researchers challenge this paradigm and provide a completely new mechanism of the Rho termination process.

This model offers a general conceptual framework from which to understand the molecular principles of all termination mechanisms.

In addition, the study shows that Rho binds tightly to RNA polymerase throughout the transcription cycle, both in vitro and in vivo. This implies that Rho acts like a “subunit” of RNA polymerase that switches to the termination mode as soon as a sufficiently long segment of unprotected transcript emerges from RNA polymerase onto which Rho can load.

“Once you know the exact mechanism by which a key transcription factor works, you can design small molecules to alter its function so that bacteria won’t be able to survive,” says Evgeny Nudler, the Julie Wilson Anderson Professor of Biochemistry at NYU and lead author of the study. “You can also use this new information to alter bacteria in a positive way—that is to design bacterial strains that can produce essential nutrients like vitamins and amino acids in larger quantities.”

In the study published by Nudler and coworkers last year in Science, the researchers used antibiotic bicyclomycin, which specifically target Rho to uncover the functional role of this termination factor in the cell. They found that Rho was responsible for controlling the expression of almost every gene in E.coli, by adjusting the overall transcriptional yield to cellular needs.

They also discovered that Rho plays a critical role in protecting bacteria from the toxic effects of so called “horizontally transferred” genes—for example, genes that bacteria picked up from viruses and other bacteria. Many of those genes make bacteria resistant to antibiotics.

Researchers from NYU and the University at Albany contributed to the work, which was supported by a grant from the National Institutes of Health.