U. OREGON (US) — Native populations in far-northern climates face growing health risks, particularly in the face of a rapidly warming climate and efforts to extract natural resources from their homelands.

That is the conclusion of a research review, drawn primarily from epidemiological studies of indigenous populations, that covers five geographically defined regions—Alaska in the United States, northern Canada, Greenland, Scandinavia (Norway, Sweden, and Finland), and northern Russia.

Of approximately 10 million natives who live in these Arctic and sub-Arctic regions, the Sami of Scandinavia are the healthiest, but their indigenous neighbors across northern Russia show “extremely poor health indicators and marked disparities compared with Russia as a whole.” 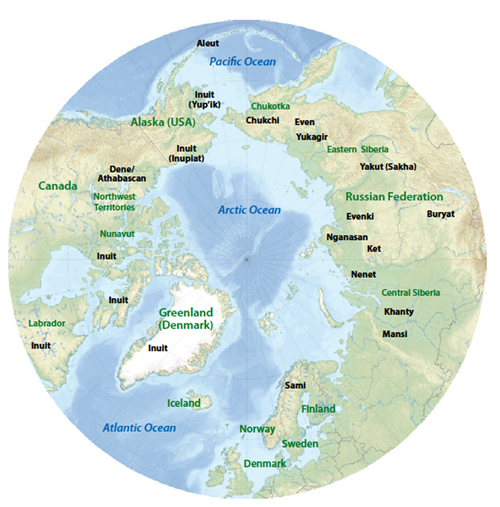 “I had originally planned to make the paper more anthropological to provide a bio-cultural perspective, but I ended up emphasizing the epidemiological data since there really hadn’t been an accessible and systematic review of disease patterns across native circumpolar populations,” says University of Oregon anthropologist J. Josh Snodgrass.

“It’s truly amazing how little attention has been focused on the big picture of health among native Arctic populations.” Snodgrass notes extensive research on suicide and drug use, “but little that puts all the pieces together.” The review study is published in the journal Annual Review of Anthropology.

The burden of disease risks in these areas, he says, differs from anywhere else on the planet, especially given moderately high levels of infectious and parasitic diseases, mental health issues, and substance abuse problems coupled with the growing prevalence of chronic disease.

Indigenous populations covered in the review were: the Inuit and Aleut in Alaska; Inuit and Dene in northern Canada; the Inuit in Greenland; the Sami in Scandinavia; and the Evenki, Khanti, Mansi and Yakut in northern Russia. Many of these, Snodgrass says, are uniquely vulnerable to the effects of global climate change and the risks will only accelerate by rapid and intense economic development, much of it centered on the extraction of resources, including oil and minerals.

In the study, Snodgrass assesses both current health and coming challenges, including mental health and susceptibility to cancers, obesity and hypertension.

“Regional wealth does not necessarily translate into health benefits for all,” he writes. In addition, already occurring climate warming, including melting glaciers and sea ice and decreased permafrost, will only be compounded if the projected rise of the mean annual temperature—ranging from 3 to 7 degrees Celsius (5 to 13 degrees Fahrenheit)—by the end of the century becomes a reality.

In addition, populations in Alaska and northern Russia show high rates of alcoholism. Northern Russian populations also bear a predisposition to high blood pressure in adaptive patterns triggered by political changes after the fall of the Soviet Union.

“Cultural and individual factors often interact with underlying genetic susceptibility within the context of a particular environment to structure health risk,” Snodgrass writes. The study, he says, “emphasizes the need to consider regional adaptive patterns when investigating global health variation and underscores the importance of developing innovative models to understand disease patterns that integrate environmental exposure with underlying differences in susceptibility.”