JOHNS HOPKINS (US) — Osteoarthritis, a painful disease thought to be primarily a problem with the cartilage that cushions joints, may actually be caused in large part by the bone underneath.

The insight led to a proof-of-concept experiment in which researchers found they could stop progression of the degenerative disease by blocking the action of a critical protein involved in bone regulation. Should that strategy prove sound in further studies, it could help future patients avoid joint replacement surgery. 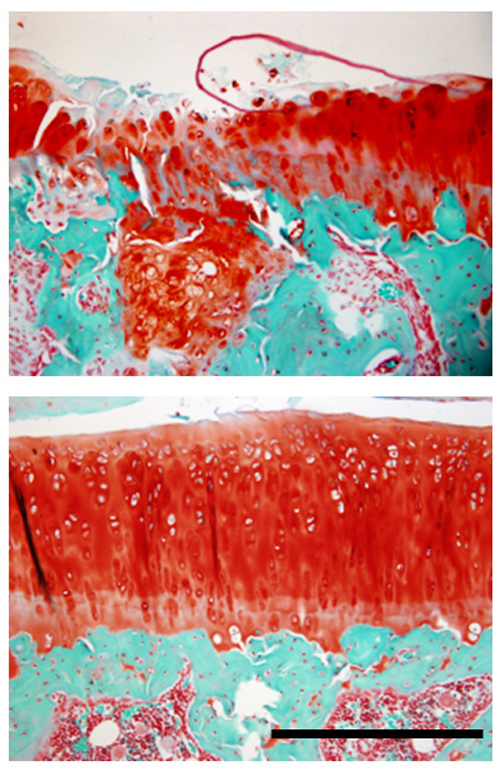 When placed in the bone (green) beneath the cartilage (red) of a rat’s knee joint, antibodies against the protein TGF-beta1 can prevent the damage caused by osteoarthritis. Top, without treatment; bottom, with treatment. (Credit: Gehua Zhen/Courtesy of Nature Medicine)

“Our results are potentially really good news for patients with OA,” says lead researcher Xu Cao, director of musculoskeletal research and professor of orthopedic surgery at the Johns Hopkins University School of Medicine.

The traditional theory on how patients develop osteoarthritis, or OA, focuses on unstable mechanical pressure on the joints between bones. That, the theory says, leads to more and more harm to the cartilage—and pain to the patient—until the only treatment option left may be total replacement of, for instance, a knee or hip.

The new theory, reported in Nature Medicine, suggests that initial harm to the cartilage causes the bone underneath it to improperly build itself up. The extra bone stretches the cartilage above and speeds its decline.

“If there is something wrong with the leg of your chair and you try to fix it by replacing the cushion, you haven’t solved the problem,” says Cao. “We think that the problem in OA is not just the cartilage ‘cushion,’ but the bone underneath.”

Joints are formed at the intersection of two bones. To prevent the grinding and wearing down of the ends of bones, they are capped with a thin layer of cartilage, which not only provides a smooth surface for joint rotation but also absorbs some of the weight and mechanical strain on the joint.

Athletes, overweight people, and people whose muscles are weakened by aging are at highest risk of developing OA. The prevalence of the disease is rapidly increasing; it currently affects 27 million Americans and may double by 2030. The only treatments available are pain management and surgical replacement of the arthritic joint with a prosthetic one.

Cao says that the lack of either effective drugs or a complete understanding of the progress of OA led him and colleagues at the university and in China to search for a different underlying cause.

“We began to think of cartilage and the bone underneath it, called subchondral bone, as functioning as a single unit,” Cao says. “That helped us to see the ways in which the bone was responding to changes in the cartilage and exacerbating the problem.”

Using mice with anterior cruciate ligament tears, which can lead to OA of the knee, the researchers found that, as soon as one week after the injury, pockets of subchondral bone had been “chewed” away by cells called osteoclasts.

This process activated high levels in the bone of a protein called TGF-beta1, which, in turn, recruited stem cells to the site so that they could create new bone to fill the holes. Cao calls these pockets of new bone formation “osteoid islets.”

But the bone building overcompensated for the bone destruction process, placing further strain on the cartilage cap. It is this surplus bone formation that Cao and his colleagues now believe to be at the heart of OA, a belief bolstered by a computer simulation of the human knee.

With its new hypothesis, the team tried several methods to block the activity of TGF-beta1. When an inhibtor drug was given intravenously, the subchondral bone improved significantly, but the cartilage cap deteriorated further. When a different, antibody-based inhibitor of TGF-beta1 was injected directly into the subchondral bone, however, the positive effects were seen in the bone without the negative effects on the cartilage. The same result was also seen when TGF-beta1 was genetically disrupted in the bone precursor cells alone.

“We are already working,” Cao says, “to develop a clinical trial to test the efficacy of locally applied TGF-beta1 antibodies in human patients at early stages of OA.” If successful, their nonsurgical treatment could make OA—and the pain and debilitation it causes—halt in its tracks, he says.

The National Institute of Diabetes and Digestive and Kidney Diseases supported the study.

Thigh bone evolution got dinos up on two feet

Team solves mystery case of TB in the bones