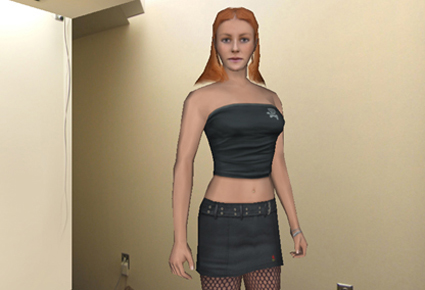 Researchers found that study participants who saw their own avatars running were more likely to exercise after they left the lab than participants who saw someone else’s avatar exercising or saw themselves hanging out in a virtual room. They also found that an avatar’s dress influenced attitudes and views toward women. (Courtesy: Stanford)

STANFORD (US)—If you saw a digital image of yourself running on a virtual treadmill, would you feel like going to the gym? Probably so, according to a study showing that personalized avatars can motivate people to exercise and eat right.

And, you are more likely to imitate the behavior of an avatar in real life if it looks like you, says Jesse Fox, a researcher at the Stanford Virtual Human Interaction Lab and doctoral student at Stanford University.

In her study, she used digital photographs of participants to create personalized avatar bodies, a service some game companies offer today. 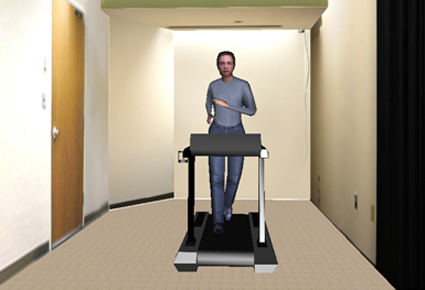 To escape to the virtual realm, you simply slip on a helmet with screens attached in front of the eyes. You are instantly immersed in a digital room and fully surrounded by a new world, as if you are inside a video game. Cameras in the lab track an infrared light on your helmet so that images on the screen move with your head.

In Fox’s first test, some participants put on the helmet and saw their avatar running on a treadmill. Others saw themselves loitering in the virtual room or saw a running avatar they didn’t recognize.

Fox contacted participants a day after the study and found that the people who saw their own avatar running were more likely to exercise (after they left the lab) than the people who saw someone else running or saw themselves just hanging out in the virtual room. In fact, those who watched themselves running were motivated to exercise, on average, a full hour more than the others. They ran, played soccer, or worked out at the gym.

“They had imitated their avatar’s behavior,” Fox says.

Seeing their face on an avatar was the driving factor. “If they saw a person they didn’t know, they weren’t motivated to exercise. But if they saw themselves, they exercised significantly more,” she says.

Fox thinks personalized avatars could be used to motivate healthy behavior. For example, someone on a long-term weight loss schedule could pull out his or her cell phone and track progress by watching the avatar body slim down onscreen.

In a separate study, Fox tested the influence of avatars on attitudes and views toward women. She showed participants two types of female avatars: a suggestively dressed woman in revealing clothing and a conservatively dressed woman in blue jeans and a jacket. Both types of avatars demonstrated either dominant behavior such as staring at the participant or submissive behavior such as staring at the floor and cowering.

Both male and female participants exposed to the suggestive avatar showed higher rape myth acceptance when answering a questionnaire afterward. This is the view that women deserve to be raped if, for example, they wear suggestive clothing or are out alone at night.

These participants were also more likely to agree with statements such as “women seek to gain power by getting control over men” and “women are too easily offended.” Even when Fox ran a similar test with women whose own faces appeared on the sexualized avatars, participants still showed higher rape myth acceptance.

Video games almost always portray women in a stereotypical manner, Fox says. “If all it takes is five minutes of exposure in an immersive virtual world to one character, we really have to ask ourselves about exposures and interactions in video games like Grand Theft Auto,” Fox says. The female characters in Grand Theft Auto are often scantily clad victims of violence.

On the other hand, the influences of body image in the virtual world may also help women. For example, an anorexic woman with a poor self-image might embody a healthy-looking avatar. She might become comfortable in her new body as she interacts with others in the virtual world and experiences acceptance and approval. Learning the benefits of being healthy may motivate her to adopt a healthy diet or seek help in real life.

After studying the influence of avatars, Fox is sure about one thing: the need for media literacy. “The bottom line is that we have to have more education in society, particularly showing students stereotypes that exist in media and why they exist.”

Fox’s research was funded by a grant from the National Science Foundation.

Women in Congress are more likely to get interrupted in hearings

Do video games help or hurt well-being after a job loss?