PURDUE (US) — The chemicals that make a grilled steak taste so good could add inches to your waistline and may be linked to cardiovascular and other diseases.

A steak slapped onto a hot barbecue will leave the meat with black grill lines that add flavor and aroma, but the chemicals contained in charred, seared, and fried foods may over time kick-start the body’s ability to add new fat cells and increase the risk of age-related diseases.

Over time, the human body shuts down the ability of young fat cells to mature and accumulate lipids. But grilling, searing, and frying create glycated proteins, which result from proteins chemically bonding with sugar. 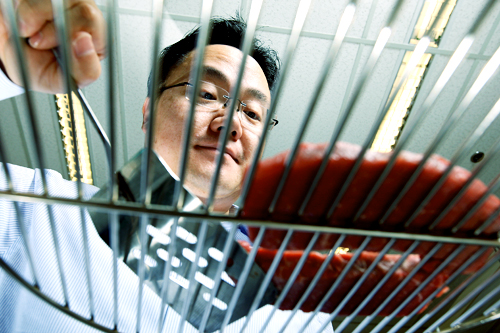 “It’s not immediately toxic, but if you’re exposed over a long period of time, some portions of the glycated materials accumulate in the cells or tissues, and over time, that contributes to inflammation and oxidative stress,” says Kee-Hong Kim. View larger. (Tom Campbell/Purdue Agricultural Communication)

“When you put proteins and sugars together at high temperatures, there is a chemical reaction, and that creates flavor and texture, which we think of as good things,” says Kee-Hong Kim, an assistant professor of food science at Purdue University. “Research suggests that these glycated proteins are involved in age-related diseases like cardiovascular disease.”

Kim wanted to see whether glycated proteins affect the speed at which precursor, or immature, fat cells turn into mature fat cells. Using a cell culture, Kim saw no change in how quickly those immature cells accumulated lipids, which is stored as fat in cells, but he did notice something else.

“Older animals don’t generally accumulate new fat cells. Those precursor cells lose their ability to become mature as we age,” Kim says. “But when exposed to glycated proteins, immature fat cells started to differentiate and accumulate lipids like they would in a younger animal.

“When we continuously consume glycated proteins we might turn on the ability of precursor cells to mature,” said Kim, whose findings are published in the Journal of Biological Chemistry.

The byproducts of glycated proteins—advanced glycation end products, or AGEs—interfere with cellular processes that should kill immature fat cells in older animals. That means those animals, or people, may accumulate more fat cells than they should, and those cells store compounds that can lead to inflammation and certain types of diseases.

“It’s really interesting that a single food component could contribute to a number of diseases,” says Chih-Yu Chen, a doctoral student in Kim’s laboratory. “This could cause people to think about their food preparation and diet choices.”

Kim is investigating the relationship between obesity and a number of chronic illnesses such as diabetes, cardiovascular disease, and some types of cancer. He believes glycated proteins may be a factor in some of those diseases.

“It’s not immediately toxic, but if you’re exposed over a long period of time, some portions of the glycated materials accumulate in the cells or tissues, and over time, that contributes to inflammation and oxidative stress,” Kim says.

Next, Kim would like to confirm his findings in an animal model. The Purdue Research Foundation, a Ralph W. and Grace M. Showalter Research Trust Award, and Purdue startup funds supported his work.