RICE (US) — Researchers have designed inexpensive “swarming” robots that work collectively—and can be assembled in minutes.

James McLurkin, a robotics professor at Rice University, plans to make the sophisticated “R-one” robots available in kit form next year, for use in the lab, classroom, or at home. Each R-one can be programmed to work individually or collectively in swarms. 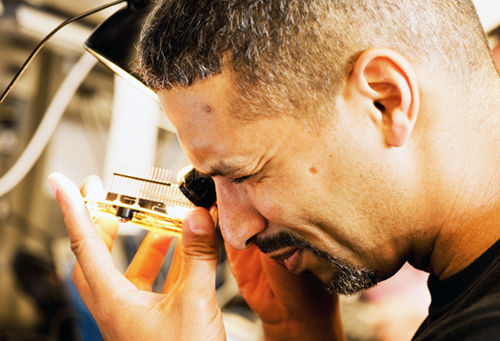 “I want robots to be as popular as scientific calculators,” McLurkin says. “I want to support a curriculum where every student has their own robot and can study individual lessons, and where they can also work in teams—using their robots collectively in multi-robot systems .”

McLurkin began work on the R-one shortly after arriving at Rice in 2009. But he’s no stranger to building robots. He created his first as a teenager, and at age 20 he built what was then one of the smallest, self-contained robots in the world.

He later won the Lemelson-MIT student prize for invention and went on to become a lead research scientist at iRobot Corp., where he managed the DARPA -funded Swarm Robotics project.

“Swarm” robots work collectively on tasks—like a colony of ants or bees—and can do some jobs faster and better than humans, McLurkin says.

“When we had the big oil spill in the Gulf of Mexico last year, it would have been fantastic to have 1,000 little robots swimming around in the Gulf to identify where the oil went,” he says.

“Earthquakes offer another practical application. Humans are particularly ill-suited to look for survivors after earthquakes—we are too big and too weak. Swarms of small robots could penetrate the rubble and carry out a coordinated search much faster and more safely.”

McLurkin’s Multi-Robot Systems Laboratory specializes in creating both the hardware and software that allow robots to work together in swarms. When he arrived at Rice, each of his test robots cost about $2,000—far too much to build a large swarm.

“I wanted Rice’s R-one robots to be cheap enough that I could build hundreds of them,” McLurkin says. “Lowering the cost was a way to make it possible for our lab to study large swarms, but it was also a way to give something back to the robotics community—to make it possible to put these into any classroom or aftercare program that wants them.”

McLurkin says the parts for the R-one currently cost about $200 and can be put together in just a few minutes. Within the next year, he plans to begin offering the R-one as a kit that can be assembled at home or school.

And he’s already pioneering the educational model for the R-one in his introductory engineering course for Rice freshmen. Each student in the class is issued a robot on day one.

“The students work by themselves on programming and mechanical engineering. I just handed out a homework assignment last week on velocity control and building a feedback loop,” he says. “But the real magic happens when they get together. Now we can learn about distributed control. We can play Follow the Leader and have the robots flock and organize together.”

For the course’s final project last fall, McLurkin divided the class into teams for a tournament of “Quidditch “—a game in the popular Harry Potter books.

“It was a shameless attempt to get more students interested in engineering, but it was also a great educational experience,” McLurkin says. “The students had to work together to program their robots to do all the important things you have to do to win a game of Quidditch, and they did amazingly well.”

Changes in education requirements for cops could save lives