PENN STATE (US) — Using a few tiny liquid bubbles to bend light beams could open the doors for next-generation, high-speed circuits and displays, according to new research.

To combine the speed of optical communication with the portability of electronic circuitry, researchers use nanoplasmonics—devices that use short electromagnetic waves to modulate light on the nanometer scale, where conventional optics do not work. However, aiming and focusing this modulated light beam at desired targets is difficult.

“There are different solid-state devices to control (light beams), to switch them or modulate them, but the tenability and reconfigurability are very limited,” says Tony Jun Huang, associate professor of engineering science and mechanics at Penn State. “Using a bubble has a lot of advantages.” 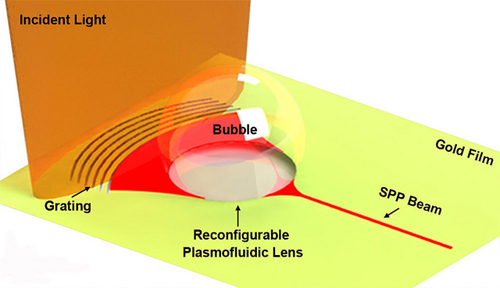 The main advantage of a bubble lens is just how quickly and easily researchers can reconfigure the bubble’s location, size, and shape—all of which affect the direction and focus of any light beam passing through it.

Huang’s team created separate simulations of the light beams and bubble lens to predict their behaviors and optimize conditions before combining the two in the laboratory. They published their findings in Nature Communications.

To form the bubble lens, researchers used a low-intensity laser to heat water on a gold surface. The tiny bubble’s optical behavior remains consistent as long as the laser’s power and the environmental temperature stay constant.

Simply moving the laser or adjusting the laser’s power can change how the bubble will deflect a light beam, either as a concentrated beam at a specific target or as a dispersed wave. Changing the liquid also affects how a light beam will refract.

The materials to form bubble lenses are inexpensive, and the bubbles themselves are easy to dissolve, replace, and move.

“In addition to its unprecedented reconfigurability and tenability, our bubble lens has at least one more advantage over its solid-state counterparts: its natural smoothness,” says Huang. “The smoother the lens is, the better quality of the light that pass through it.”

Huang believes that the next step is to find out how the bubble’s shape influences the direction of the light beam and the location of its focal point. Fine control over these light beams will enable improvements for on-chip biomedical devices and super resolution imaging.

“For all these applications, you really need to precisely control light in nanoscale, and that’s where this work can be a very important component,” says Huang.

The National Institutes of Health, the National Science Foundation, and the Penn State Center for Nanoscale Science funded this study.