JOHNS HOPKINS (US) — Scientists have found that the brain can bring together unconnected memories about places, allowing us to mentally map out new routes to get us where we want to go.

Researchers monitoring the activity of special cells in the hippocampus of rat brains were able to see the rats’ “thoughts” as they navigated through familiar territory in search of a chocolate reward.

Knowing how this path finding takes place will help researchers understand how damage to the hippocampus causes specific types of memory and learning loss in people with Alzheimer’s disease and age-related cognitive decline. 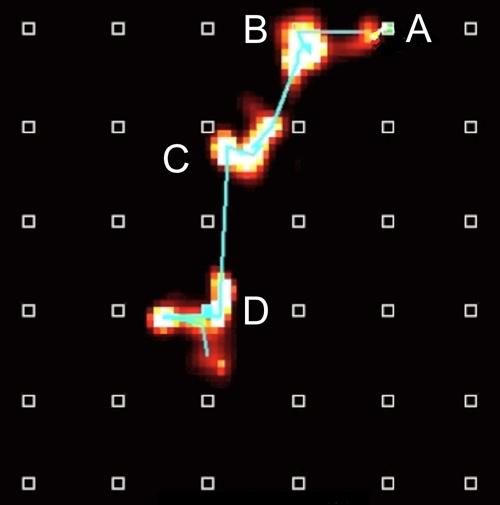 In an image compiled over a few milliseconds, a rat’s imagined trajectory from point A to its chocolate reward at point D. Unique combinations of the brain’s place cells fire in sequence (red lights) to represent each part of the path (A to B to C to D) that the rat will take. (Credit: David Foster/Nature)

“For the first time, we believe we have evidence that before a rat returns to an important place, it actually plans out its path,” says David Foster, assistant professor of neuroscience at the Johns Hopkins University School of Medicine. “The rat finds that location in its mind’s eye and knows how to get there.”

At least for the purposes of navigation, the “mind’s eye” is located in the hippocampus, banana-shaped segments under the cerebral cortex on both sides of the brain. It is best known for creating memories. In people with Alzheimer’s, it is one of the first parts of the brain to sustain damage.

The experiments, reported online in the journal Nature, focused on a group of neurons in the hippocampus that are called “place cells” because they are known to fire when animals are at a given location within a given environment. What was not known, was how and when the brain uses that information.

By miniaturizing existing technology, Foster and postdoctoral fellow Brad Pfeiffer were able to implant 20 microwires into each side of the hippocampus of four rats. The tiny wires let them record electrical activity from as many as 250 individual place cells at the same time, more than ever achieved before.

Over two weeks of training, the rats became familiar with the testing area, which was surrounded by a variety of objects so that the rats could tell where they were in relation to the objects outside. The space was 2 meters square with 36 tiny “dishes” placed at regular intervals in a grid. One dish at a time was filled with the rats’ reward: liquid chocolate.

The rats then took as many as 40 sets of alternating “odd” and “even” navigation tests per day. The odd trials required the rats to “forage” through the arena to find a chocolate-filled dish in a random location; the even trials required the rats to return each time to a “home” dish to receive their reward. While the rats fulfilled their tasks, the researchers recorded the firing of their place cells.

They found that as a rat travels randomly through the box without knowing where it needs to go, different combinations of place cells fire at each location along its path. The same set of cells fires every time the rat travels to the same spot. These unique combinations of firings “mark” each spot in the rat’s brain and can be reconstructed into what seems like a virtual map, when needed.

When a rat is about to go to a specific location—for instance, “home”—the place cells in its hippocampus fire in a sequence that creates a predictive path, which the rat then follows, somewhat like Hansel and Gretel following an imagined bread crumb trail.

Foster says that “unlike a Hansel and Gretel bread crumb trail, which only allows you to leave by the same route by which you entered, the rats’ memories of their surroundings are flexible and can be reconstructed in a way that allows them to ‘picture’ how to quickly get from point A to point B.”

In order to do this, he says, the rats must already be familiar with the terrain between point A and point B, but, like using GPS, they don’t have to have previously started at point A with the goal of reaching point B.

The elderly can get lost easily, and research on aged mice shows that their place cells can fail to distinguish between different environments. The new research suggests that defective place cells would also affect a person’s ability to “look ahead” in their imaginations to predict a way home. Similarly, he says, higher-order brain functions, like problem solving, also require people to “look ahead” and imagine themselves in a different scenario.

“The hippocampus seems to be directing the movement of the rats, making decisions for them in real time,” says Foster. “Our model allows us to see this happening in a way that’s not been possible before. Our next question is, what will these place cells do when we put obstacles in the rats’ paths?”

This work was supported by grants from the National Institute of Mental Health, the Alfred P. Sloan Foundation, and the Brain and Behavior Research Foundation.

Music can benefit people with Alzheimer’s and caregivers