U. PITTSBURGH (US) — New imaging technology will allow doctors to clearly see for the first time neural connections broken by traumatic brain injury.

Called High Definition Fiber Tracking, the technology shows injuries much like X-rays show a fractured bone, according to researchers from the University of Pittsburgh in a report published online in the Journal of Neurosurgery.

In the report, the researchers describe the case of a 32-year-old man who wasn’t wearing a helmet when his all-terrain vehicle crashed. Initially, his CT scans showed bleeding and swelling on the right side of the brain, which controls left-sided body movement. 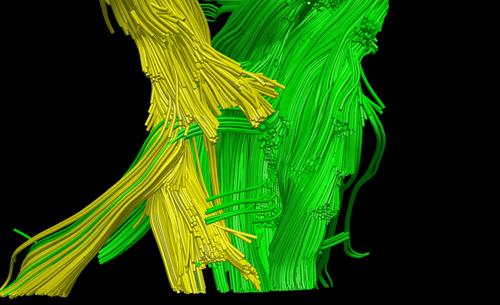 High definition fiber tracking reveals loss of fibers, or connections, on the injured right side (yellow) and the intact, undamaged left side (green). The patient was injured in an ATV accident and lost function in his left leg, arm, and hand. (Credit: Walt Schneider Laboratory) 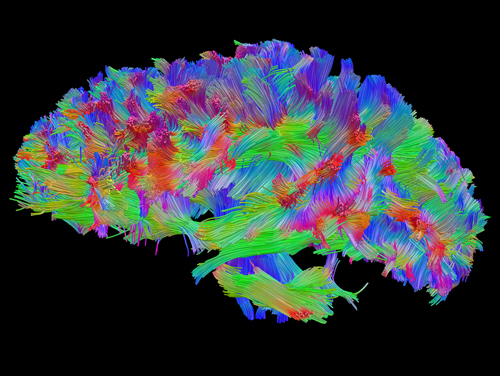 A week later, while the man was still in a coma, a conventional MRI scan showed brain bruising and swelling in the same area. When he awoke three weeks later, the man couldn’t move his left leg, arm and hand.

“There are about 1.7 million cases of TBI in the country each year, and all too often conventional scans show no injury or show improvement over time even though the patient continues to struggle,” says co-senior author and neurosurgeon David O. Okonkwo, associate professor in the neurological surgery department.

“Until now, we have had no objective way of identifying how the injury damaged the patient’s brain tissue, predicting how the patient would fare, or planning rehabilitation to maximize the recovery.”

HDFT might be able to provide those answers, says co-senior author Walter Schneider, professor of psychology, who led the team that developed the technology.

Data from sophisticated MRI scanners is processed through computer algorithms to reveal the wiring of the brain in vivid detail and to pinpoint breaks in the cables, called fiber tracts. Each tract contains millions of neuronal connections.

“In our experiments, HDFT has been able to identify disruptions in neural pathways with a clarity that no other method can see,” Schneider says. “With it, we can virtually dissect 40 major fiber tracts in the brain to find damaged areas and quantify the proportion of fibers lost relative to the uninjured side of the brain or to the brains of healthy individuals. Now, we can clearly see breaks and identify which parts of the brain have lost connections.”

HDFT scans of the study patient’s brain were performed four and 10 months after he was injured; he also had another scan performed with current state-of the-art diffusion tensor imaging (DTI), an imaging modality that collects data points from 51 directions, while HDFT is based on data from 257 directions. For the latter, the injury site was compared to the healthy side of his brain, as well as to HDFT brain scans from six healthy individuals.

Only the HDFT scan identified a lesion in a motor fiber pathway of the brain that correlated with the patient’s symptoms of left-sided weakness, including mostly intact fibers in the region controlling his left leg and extensive breaks in the region controlling his left hand. The patient eventually recovered movement in his left leg and arm by six months after the accident, but still could not use his wrist and fingers effectively 10 months later.

Memory loss, language problems, personality changes and other brain changes occur with TBI, which the researchers are exploring with HDFT in other research protocols.

University of Pittsburgh neurosurgeons also have used the technology to supplement conventional imaging, noted Robert Friedlander, professor and chair in the neurological surgery department, who was not involved with the study.

“I have used HDFT scans to map my approach to removing certain tumors and vascular abnormalities that lie in areas of the brain that cannot be reached without going through normal tissue,” he says.

“It shows me where significant functional pathways are relative to the lesion, so that I can make better decisions about which fiber tracts must be avoided and what might be an acceptable sacrifice to maintain the patient’s best quality of life after surgery.”

Okonkwo notes that the patient and his family were relieved to learn that there was evidence of brain damage to explain his ongoing difficulties. The team continues to evaluate and validate HDFT’s utility as a brain imaging tool, so it is not yet routinely available.

“We have been wowed by the detailed, meaningful images we can get with this technology,” Okonkwo says. “HDFT has the potential to be a game-changer in the way we handle TBI and other brain disorders.”

The study was funded by the Defense Advanced Research Projects Agency.

More news from the University of Pittsburgh: www.news.pitt.edu/

A pill may beat mammograms at spotting breast cancer