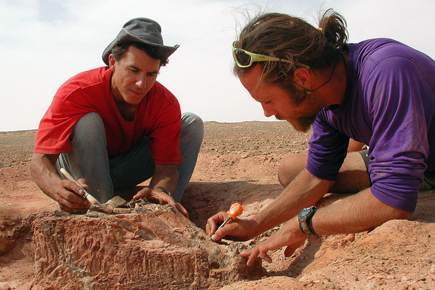 Paleontologists Paul Sereno and Hans Larsson excavate the fossil skull of a 100-million-year-old croc in Niger. The animal, which they nicknamed BoarCroc, was one of several crocs that inhabited a lost world now buried in the sands of the Sahara. (Credit: Mike Hettwer/National Geographic)

U. CHICAGO (US)/MCGILL (CANADA)—A suite of five ancient crocs, including one with teeth-like boar tusks and another with a snout like a duck’s bill, have been discovered in the Sahara.

The five fossil crocs, three of them newly named species, are remains of a bizarre world of crocs that inhabited the southern land mass known as Gondwana some 100 million years ago.

Paul Sereno, a University of Chicago paleontologist and National Geographic Explorer-in-Residence, and his team unearthed the strange crocs in a series of expeditions beginning in 2000 in the Sahara. Many of the fossils were found lying on the surface of a remote, windswept stretch of rock and dunes.

The crocs galloped and swam across present-day Niger and Morocco, when broad rivers coursed over lush plains and dinosaurs ruled.

“These species open a window on a croc world completely foreign to what was living on northern continents,” Sereno says. 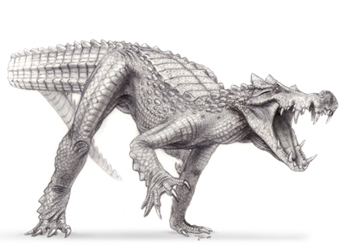 The five crocs, along with a closely related sixth species, will be detailed in a paper published in the journal ZooKeys and appear in the November 2009 issue of National Geographic magazine. The crocs also will star in a documentary, “When Crocs Ate Dinosaurs,” to premiere at 9 p.m. ET/PT Saturday, Nov. 21, on the National Geographic Channel.

At 40 feet in length and weighing 8 tons, Sarcosuchus imperator, popularly known as SuperCroc, was the first and largest of the crocs Sereno found in the Sahara, but it was not the strangest, Sereno says. He and his teams soon discovered key fossils of five previously unknown or poorly understood species; most of them walked “upright,” with their arms and legs under the body like a land mammal instead of sprawled out to the sides, bellies touching the ground. 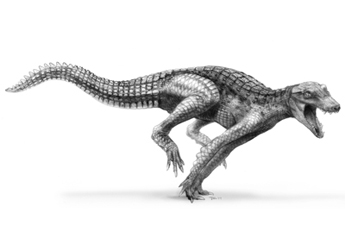 The crocs and their nicknames: 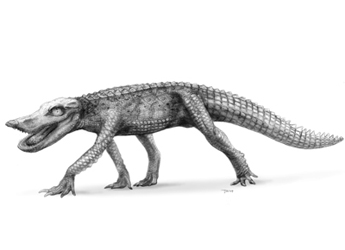 DuckCroc, a 3-foot-long, upright animal with a long nose

“We were surprised to find so many species from the same time in the same place,” says paleontologist Hans Larsson, associate professor at McGill University in Montreal and a team member who discovered the bones of BoarCroc and PancakeCroc. “Each of the crocs apparently had different diets, different behaviors. It appears they had divided up the ecosystem, each species taking advantage of it in its own way.”

To better understand how these ancient crocs—mostly upright and agile—might have moved and lived, Sereno traveled to northern Australia, where he observed and captured freshwater crocs. Realizing while 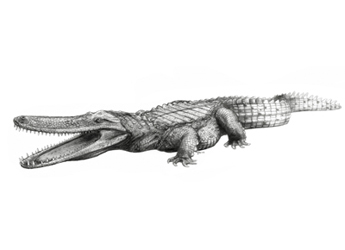 PancakeCroc, a 20-foot-long fish eater with a 3-foot, pancake-flat head

there that he may have stumbled onto one of the keys to crocodilian success, Sereno saw freshwater crocs galloping at full speed on land and then, at water’s edge, diving in and swimming away like fish. On land they moved much like running mammals, yet in a flash turned fishlike, their bodies and tails moving side to side, propelling them in water.

Based on interpretation of the fossils, Sereno and Larsson hypothesize that these early crocs were small, upright gallopers. In the scientific paper, they suggest that the more agile of their new croc menagerie could not only gallop on land but also evolved a swimming tail for agility and speed in water, two modes of locomotion suggested to be evolutionary hallmarks for the past 200 million years.

“My African crocs appeared to have had both upright, agile legs for bounding over land and a versatile tail for paddling in water,” Sereno writes in the National Geographic magazine article. “Their amphibious talents in the past may be the key to understanding how they flourished in, and ultimately survived, the dinosaur era.” 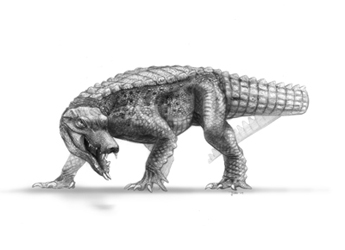 To study the crocs’ brains, Sereno CT-scanned the skulls of DuckCroc and DogCroc and then created digital and physical casts of the brains. The result: Both DogCroc and DuckCroc had broad, spade-shaped forebrains that look different from those of living crocs. “They may have had slightly more sophisticated brain function than living crocs,” Larsson says, “because active hunting on land usually requires more brain power than merely waiting for prey to show up.”

To collect the croc fossils, Sereno and his teams endured temperatures topping 125 degrees Fahrenheit, living for months on dehydrated food. Logistics were challenging: For the 2000 expedition, they transported trucks, tools, tents, five tons of plaster, 600 pounds of water and four months’ worth of other supplies.

Sereno’s research and field expeditions were funded by the National Geographic Society and the Whitten-Newman Foundation.