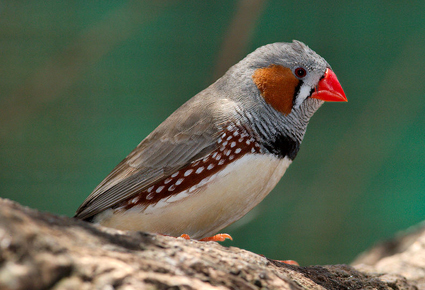 A zebra finch needs tutoring before it can vocalize or sing. If what appears true for zebra finches is true for humans, then infants deprived of appropriate auditory experience (due to hearing loss or isolation) may fail to develop normal lateralization, which, in turn, could lead to defects in speech processing or production. (Courtesy: Wikimedia Commons)

Known as lateralization, the function allows for a division of labor between the brain hemispheres for certain tasks. The left brain hemisphere controls speech production and decoding in most people. Previous studies in songbirds have shown that the control of singing is also lateralized.

David Vicario, a professor of psychology at Rutgers, and research associate Mimi Phan study bird brains in order to understand how humans learn to talk. Their new study is published in the Proceedings of the National Academy of Sciences (PNAS).

Researchers tested responses in the brain when a bird hears a song and found clear differences in the way the two hemispheres process this social communication signal.

Most important, birds deprived of appropriate auditory input during development don’t lateralize. This suggests that early experience with vocal sounds may impact the two hemispheres differently.

Phan and Vicario proved this by manipulating the auditory environment of juvenile zebra finches of both sexes.

The birds were isolated, and some were tutored with natural songs (produced only by male, not female zebra finches) and others heard no external sounds; the only vocalizations these young birds heard were their own.

Finally, they raised some birds that were unable to vocalize. Some of the mute birds heard tutor songs, while others did not.

When the birds were adults, microelectrodes were used to measure the electrical activity in each hemisphere, in all the groups of birds with different early experience. Intact male birds, tutored or untutored, showed lateralization but mute, untutored birds raised in silence did not—indicating that the birds have to hear something in their early experience in order to lateralize.

These results in songbirds show lateralization is not completely hard-wired, but depends on the birds’ early experience with complex species-typical vocalizations, the researchers say.

If what appears true for zebra finches is true for humans, then infants deprived of appropriate auditory experience (due to hearing loss or isolation) may fail to develop normal lateralization, which, in turn, could lead to defects in speech processing or production.

Humpback whale song is for finding other whales, not courting them

You might be underestimating strangers’ interest in your life