MCGILL (CAN) — A new map splits the globe into 11 large realms based on evolutionary and geographical information for all known mammals, birds, and amphibians—about 20,000 species.

The first attempt to describe the natural world in an evolutionary context was made in 1876 by Alfred Russel Wallace, who, along with Charles Darwin, discovered the theory of natural selection. See both maps below.

Thanks to advances in modern technology, scientists have now produced a next-generation map depicting the organization of life on Earth.

“Our study is a long overdue update of one of the most fundamental maps in natural sciences,” says co-lead author Jean-Philippe Lessard, a postdoctoral fellow at the Quebec Centre for Biodiversity Science based at McGill University.

The new map provides fundamental information regarding the diversity of life on our planet and is of major significance for future biodiversity research.

An essential question in understanding life on Earth is why species are distributed the way they are across the planet.

This new global map shows the division of nature into the 11 biogeographic realms and shows how these areas relate to each other.

Based on work at the Center for Macroecology, Evolution and Climate at the University of Copenhagen involving 15 international researchers and 20 years of data compilation, the study is published today online in Science Express.

“For the first time since Wallace’s attempt we are finally able to provide a broad description of the natural world based on incredibly detailed information for thousands of vertebrate species,” says co-lead author Ben Holt from the Center for Macroecology, Evolution, and Climate.

The new map can be split into finer geographical details for each class of animals. It is made freely available to contribute to a wide range of biological sciences, as well as conservation planning and management of biodiversity.

Lessard, who worked on the project as a postdoctoral fellow at the Center in Copenhagen, says: “Our understanding of the current and past distribution of life on Earth has improved tremendously in recent decades, but this new knowledge had yet to be synthesized into a tool all ecologists and evolutionary biologists can use. Our map could help elucidate unanswered questions regarding the origin and maintenance of biological diversity.”

Modern technology such as DNA-sequencing and a compilation of hundreds of thousands of distribution records for mammals, birds and amphibians across the globe made it possible to produce the map.

“Whereas conservation planners have been identifying priority areas based on the uniqueness of species found in a given place, we can now begin to define conservation priorities based on millions of years of evolutionary history.” 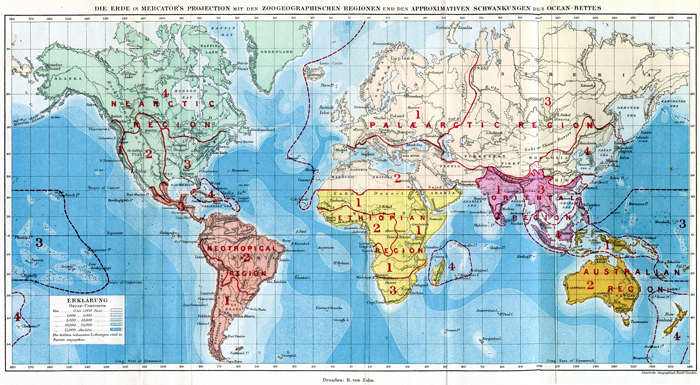 Above, the map of terrestrial zoogeographic regions of the world published in “The Geographic Distributions of Animals” (1876) by Alfred Russell Wallace. Below, the new map of life on Earth divided into 11 biogeographic realms. Click either map for a larger version. (Credit: Science/AAAS)

Why red squirrel moms gamble on the trees