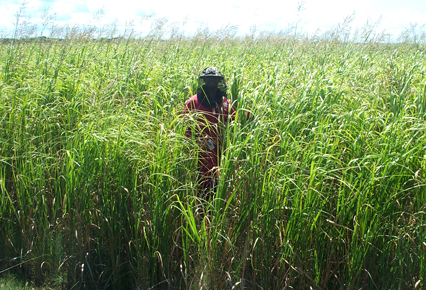 Environmental scientist Ben Horton from the University of Pennsylvania performs field work in a North Carolina salt marsh. He and colleagues have published a study showing that the Atlantic Coast sea levels are rising faster now—particularly the mid-Atlantic coastlines of New Jersey, Delaware, and Maryland, which are subsiding twice as much as areas to the north and south.

U. PENN (US)—Sea level along the Atlantic Coast is rising faster now than at any time in the past 4,000 years.

Environmental scientists at the University of Pennsylvania say that, simply put, land is being lost to subsidence as the earth continues to rise in response to the removal of the huge weight of ice sheets during the last glacial period.

Further, the researchers find that the mid-Atlantic coastlines of New Jersey, Delaware, and Maryland are subsiding twice as much as areas to the north and south. The study results were published in a recent issue of the journal Geology.

This is the first demonstrated evidence of this phenomenon from observational data alone. Researchers believe this may be related to the melting of the Greenland Ice Sheet and ocean thermal expansion.

“There is universal agreement that sea level will rise as a result of global warming but by how much, when and where it will have the most effect is unclear,” says Ben Horton, assistant professor of earth and environmental science.

“Such information is vital to governments, commerce and the general public. An essential prerequisite for accurate prediction is understanding how sea level has responded to past climate changes and how these were influenced by geological events such as land movements.”

The study provides the first accurate dataset for sea-level rise for the U.S. Atlantic coast, identifying regional differences that arise from variations in subsidence and demonstrate the possible effects of ice-sheet melting and thermal expansion for sea level rise.