BOSTON U. (US) —Researchers studying the brains of men—many former athletes who developed a degenerative condition before dying—have for the first time described the four progressive stages of an illness known as CTE.

The 68 brains came from men ages 17 to 98; 64 had been athletes (more than a third were also veterans), three were vets with no sports background, and one had repeatedly injured himself with head-banging. The youngest victims were six high school football players who developed chronic traumatic encephalopathy (CTE).

The research “extends our knowledge concerning the spectrum of the clinical and pathological abnormalities associated with CTE,” says Ann McKee, a Boston University School of Medicine professor and a codirector of the Center for the Study of Traumatic Encephalopathy (CSTE). 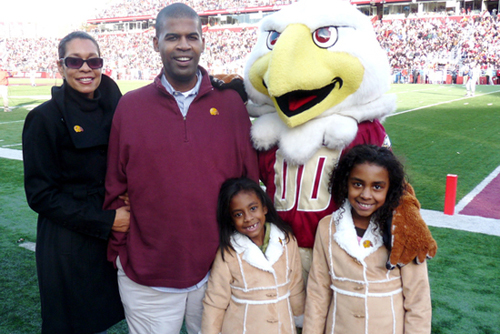 Former Boston College linebacker Ron Perryman, who died at 42 from respiratory failure, was one of the athletes whose brains had a degenerative disease and were part of BU-led research. (Photo courtesy of the Perryman Family) 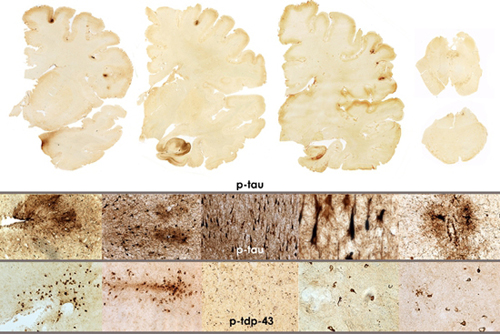 The brain of Ron Perryman shows moderate p-tau pathology involving multiple regions of brain diagnostic of stage II-III CTE. In addition, there is widespread deposition of abnormal TDP-43 protein around small blood vessels and in the cerebral cortex. These changes together with loss of anterior horn cells of the spinal cord and degeneration of the cortical spinal tracts indicate the presence of CTE plus motor neuron disease (CTE-MND). (Credit: Ann C. McKee)

McKee led the study, which included 10 BU researchers, the Veterans Affairs Boston Healthcare System, and the Sports Legacy Institute. The findings are published in the journal Brain.

Almost half (33) of the men had played in the National Football League, one in the Canadian Football League, and four in the National Hockey League. Seven had been professional boxers. Among the athletes whose identities the researchers were permitted to release were several NFL players who died last year: Hall of Fame tight end John Mackey, Hall of Fame running back Ollie Matson, and running back Cookie Gilchrist.

Researchers interviewed survivors of the brain donors to learn about behaviors exhibited as the disease progressed. In stage I of the illness, CTE victims suffered headaches and had trouble concentrating and remaining attentive; stage II victims showed depression, explosive tempers, and short-term memory problems; in stage III, cognitive impairment and difficulty with planning, organization, handling multiple tasks, and judgment appeared. The researchers report that by the final stage IV, the patients suffered full dementia.

Despite the study’s advances, information vital to effective treatment of CTE remains elusive, including the disease’s prevalence, distinctions between CTE’s symptoms and those of similar conditions, the influence of genetics, “and whether other environmental exposures also play an additive role” in the illness.

In particular, the paper says, “Inclusion of more rigorous control subjects, such as individuals who experienced repetitive mild traumatic brain injury and did not develop behavioral or cognitive abnormalities, will be extremely useful in future studies.”

The researchers don’t know how much exposure to brain trauma might trigger CTE, though there’s no evidence that “occasional, isolated, or well-managed concussions” cause it, says co-author Robert Cantu, clinical professor of neurosurgery and a CSTE codirector.

The CSTE maintains a bank of more than 135 donated brains, 80 percent of them showing signs of CTE. More than 600 athletes have pledged their brains to the bank for research after their deaths. The center has spurred the National Football League to make rule changes to better protect players from head trauma.