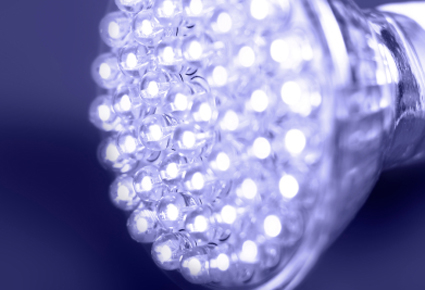 The city of Pittsburgh is considering replacing 40,000 streetlights with LEDs, similar to retrofits and pilot programs under way in several cities, including Los Angeles, San Francisco, Raleigh, N.C., and Ann Arbor, Mich. Pittsburgh estimates that, per year, replacing HPS lamps with LED streetlights would save $1 million in energy costs and $700,000 in maintenance, while reducing carbon dioxide emissions by 6,818 metric tons. (Courtesy: iStockphoto)

LEDs consist of clusters of tiny, high-intensity bulbs known for efficiency and luminosity.

Engineers at the University of Pittsburgh compared LED streetlights to the country’s two most common lamps—the high-pressure sodium (HPS) lamps found in most cities and metal halide lamps akin to those in stadiums—and to the gas-based induction bulb, another emerging technology billed as bright and energy efficient.

LEDs may carry a formidable price tag, but, in comparison to HPS and metal halide lamps, consume half the electricity, last up to five times longer, and produce more light.

Induction lights are slightly more affordable and energy efficient than LEDs, but could have a greater environmental impact when in use.

LED technology also exhibits more potential for improvement and may surpass induction lamps in the future, the researchers say.

The survey, commissioned by the city of Pittsburgh, coincides with initiatives in several U.S. cities to replace energy-guzzling HPS lamps—known for their flat orange glow—with LEDs.

The city of Pittsburgh is considering replacing 40,000 streetlights with LEDs, similar to retrofits and pilot programs under way in several cities, including Los Angeles, San Francisco, Raleigh, N.C., and Ann Arbor, Mich.

Pittsburgh estimates that, per year, replacing HPS lamps with LED streetlights would save $1 million in energy costs and $700,000 in maintenance, while reducing carbon dioxide emissions by 6,818 metric tons.

Despite the civic enthusiasm for LEDs nationwide, until the Pitt study no comprehensive analysis of LED streetlights existed, says study coauthor Melissa Bilec, professor in the Swanson School’s Department of Civil and Environmental Engineering, who conducted the survey with civil and environmental engineering professor Joe Marriott.

A “life-cycle assessment” for each lighting technology was created, with information pulled from sales companies, manufacturers, government documents, lighting professionals, and industry reports.

The assessments catalog the environmental effect of the streetlamps during their complete life span, from the extraction of raw materials and assembly to electricity consumption and disposal.

LED “bulbs” consist of small lights embedded in circuit boards that require numerous raw materials, need considerable energy to produce, and can be difficult to recycle.

LED bulbs also contain no mercury and fewer toxins, such as iodine and lead—HPS and metal halide bulbs packed an average 15 milligrams of mercury each, with induction bulbs averaging 6 milligrams.

During a bulb’s lifetime, however, electricity consumption produces up to 100 times the environmental impact of manufacturing, the authors write.

LED lights burn at 105 watts, compared to a hefty 150 for HPS and 163 for metal halide. With electricity consumption converted into kilograms of carbon dioxide produced, metal halide bulbs would emit nearly 500 million kilograms of carbon dioxide during 100,000 hours of use, followed by HPS bulbs with more that 400 million, induction bulbs with approximately 350 million, and LEDs producing slightly more than 300 million kilograms.

In addition, the reduced demand on coal-fired plants by LED technology would emit a mere two-thirds the amount of airborne toxins and particulates generated by metal halide and HPS lights.

The report also gauged the four technologies by output of nitrogen oxides—the noxious byproducts of burning fossil fuels that can return to Earth in rain and snow as harmful nitrate—and chlorofluorocarbon (CFC), the chemical compound that contributes to the ozone layer’s depletion.

In both categories, LEDs ranked the highest during the bulb-manufacturing stage but the lowest during actual use.

In this final phase, metal halides produced the greatest emissions of both pollutants, the researchers found.

In the crucial area of cost, the prices of LED lights are highly inconsistent—the team estimated a range from $9.20 to $322 per fixture. But the technology’s considerably longer life span could mitigate the sticker shock.

Based on 100,000 hours of use, LEDs did not last as long as induction bulbs—which were estimated to cost $280 per fixture—but were calculated to burn nearly three times longer than HPS lights and almost five times longer than metal halides.

As an example, 40,000 LED lamps could initially cost the city of Pittsburgh as much as $21 million versus approximately $9 million for metal halide streetlights. Yet replacing metal halides could cost as much as $44 million before the LED lamps needed a first replacement.