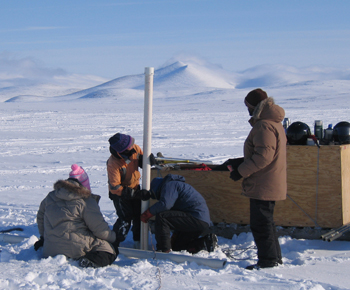 Analysis of a 200,000 year-old sediment core from a Baffin Island lake indicates warming temperatures in the Arctic due to human activity are overriding a natural cooling trend in the region. (Credit: Jason Briner/University at Buffalo)

U. COLORADO (US)—An analysis of sediment cores indicates that biological and chemical changes occurring at a remote Arctic lake are unprecedented over the past 200,000 years and likely are the result of human-caused climate change.

“The past few decades have been unique in the past 200,000 years in terms of the changes we see in the biology and chemistry recorded in the cores,” says Yarrow Axford, lead author of the new study and a researcher at the University of Colorado at Boulder’s Institute of Arctic and Alpine Research. “We see clear evidence for warming in one of the most remote places on Earth at a time when the Arctic should be cooling because of natural processes.”

The research team reconstructed past climate and environmental changes at the lake on Baffin Island using indicators that included algae, fossil insects, and geochemistry preserved in sediment cores that extend back 200,000 years. Findings were published Oct. 19 in the Proceedings of the National Academy of Sciences.

While environmental changes at the lake over the past millennia have been shown to be tightly linked with natural causes of climate change—like periodic, well-understood wobbles in Earth’s orbit—changes seen in the sediment cores since about 1950 indicate expected climate cooling is being overridden by human activity like greenhouse gas emissions.

The sediment cores were extracted from the bottom of a roughly 100-acre, 30-foot-deep lake near the village of Clyde River on the east coast of Baffin Island, which is several hundred miles west of Greenland. The lake sediment cores go back 80,000 years beyond the oldest reliable ice cores from Greenland and capture the environmental conditions of two previous ice ages and three interglacial periods.

The sediment cores showed that several types of mosquito-like midges that flourish in very cold climates have been abundant at the lake for the past several thousand years. But the cold-adapted midge species abruptly began declining in about 1950, matching their lowest abundances of the last 200,000 years. Two of the midge species adapted to the coldest temperatures have completely disappeared from the lake region, says Axford.

In addition, a species of diatom, a lake algae that was relatively rare at the site before the 20th century, has undergone unprecedented increases in recent decades, possibly in response to declining ice cover on the Baffin Island lake. 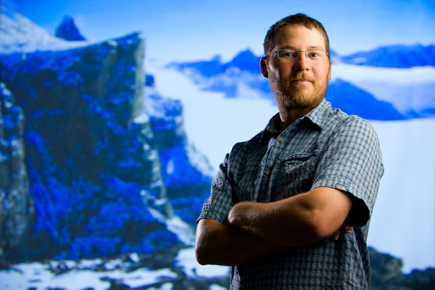 Study coauthor Jason Briner of the University at Buffalo

“Our results show that the human footprint is overpowering long-standing natural processes even in remote Arctic regions,” says coauthor John Smol of Queen’s University. “This historical record shows that we are dramatically affecting the ecosystems on which we depend.”

The ancient lake sediment cores are the oldest ever recovered from glaciated parts of Canada or Greenland. Massive ice sheets during ice ages generally scour the underlying bedrock and remove previous sediments.

“What is unique about these sediment cores is that even though glaciers covered this lake, for various reasons they did not erode it,” says study coauthor Jason Briner of the University at Buffalo. “The result is that we have a really long sequence of sediment that has survived Arctic glaciations.”

Axford emphasized the multiyear research project required expertise from each of the five institutions involved in the PNAS study. “This was a team effort all the way around, and each of the institutions has a unique set of skills that allowed us to carry out this study,” she said. “We needed people who understood algae, insects, glaciers and geochemistry, not to mention how to drive snowmobiles and extract the cores.”

Time to get rid of your gas stove?