BOSTON U. / DUKE (US) — New analysis of a pair of 1.98 million year old fossil proto-humans discovered in a South African cave in 2008 has yielded surprising insights into human evolution.

An international team of scientists has written seven papers appearing in Science. There were six earlier papers in September 2011 and two before that in 2010.

The papers examine how the new species, Australopithecus sediba, walked, climbed and chewed, and they build on the emerging picture of a “mosaic” creature—part ape, part recognizably human. 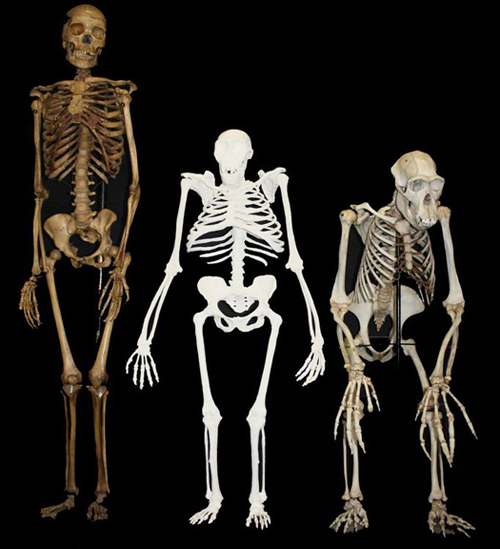 A composite model of Sediba features stands between a small modern human female (left) and a chimpanzee (right). (Credit: University of Witwatersrand)

The leader of the team, Lee Berger of the University of Witwatersrand in Johannesburg, has declared Sediba a better candidate to be the ancestor of our genus—Homo—than any other hominin specimens found to date. That challenges the dominant view that Australopithecus afarensis—the famous 3.2 million year old “Lucy” of East Africa—is the proper progenitor of Homo sapiens.

Found together in a small cave called Malapa less than an hour outside Johannesburg, the adolescent male and adult female that comprise Sediba are unusually complete. They and all the animals preserved around them were fixed in anatomical orientations that show how the bones related to one another when their flesh was whole.

The Sediba male’s skull was so complete and well-protected by the matrix of earth that sophisticated imaging had to be used to map the brain cases from the inside. CT Scans and 3D printing have been used to create other casts of the fossils for study.

Steve Churchill, a professor in Duke University’s department of evolutionary anthropology and part of the research team, is confident that this latest round of analyses and the spectacular amount of information still to be extracted from the cave will bolster Sediba’s claim, bit by bit.

“But this is all going to be controversial,” he says.

What the studies show

Australopithecus sediba has a combination of primitive and derived features in the hand, upper limb, thorax, spine, and foot. It also has a relatively small brain, a human-like pelvis, and a mosaic of Homo– and Australopithecus-like craniodental anatomy.

The torso is cone-shaped and narrower at the shoulders like an ape. This is a climbing chest, not an arm-swinging, bipedal walking chest like ours that is cylindrical and wider at the top, Churchill says.

The arms, in an analysis that Churchill led, were found to be well-suited for climbing.

“It’s a pretty apey scapula,” Churchill says. But these arms also end in a hand that was capable of a tool-maker’s “precision grip.”

The spine, though familiarly curved for upright walking and having the same number of lumbar vertebrae as ours, is more flexible in its lower reaches than a modern human’s. Monkeys are long and flexible in the lower back; chimps, gorillas and humans are not.

“We’re not sure what this is telling us,” Churchill says.

The leg is for bipedal walking, but not in a way we’ve seen before. This analysis, which Jeremy DeSilva of Boston University led, suggests that the weight of each Sediba footfall was born along the outside of the foot, rolling toward the ball and resulting in a different gait from our own. 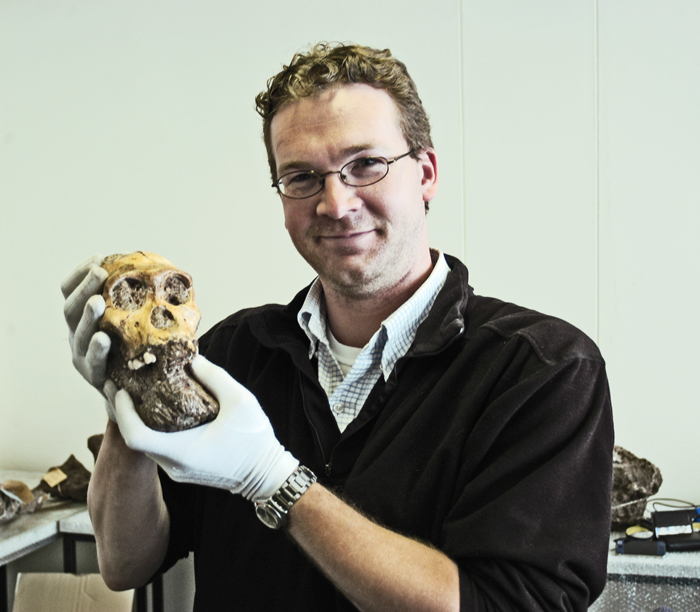 “As others have suggested, there were different kinematic solutions for being a bipedal hominin in the Plio-Pleistocene,” says DeSilva. “The mode of locomotion suggested by the Malapa skeletons indicates a compromise between an animal that is adapted for extended knee bipedalism and one that either still had an arboreal component or had re-evolved a more arboreal lifestyle from a more terrestrial ancestor.”

The middle of Sediba’s foot is more flexible than ours, which is another tree-friendly feature, Churchill says.

Afarensis footprints found in East Africa and dated to 3.6 million years show a gait more like ours, but their feet are different both from ours and Sediba’s. So now there are different forms of bipedal walking in the human and pre-human record. “It looks like the earlier hominins weren’t perfected bipeds,” Churchill says.

It looks like upright walking may have evolved more than once, which is what one would expect from the way evolution generally works.

And based on the pronation of this foot, “I think it’s unlikely that Lucy is ancestral to Sediba,” Churchill says.

There are a lot more features of these two specimens to be analyzed and more Sediba individuals to be extracted from the cave. This will last for many more years.

“A lot of what we think about human evolution comes back to the order in which the specimens were found and the ideas that were built around them,” Churchill says. Lucy was found in 1974.

Sediba has only had five years to fight for its space on the family tree.

These chimps and gorillas have hung out for years