VANDERBILT / U. PENNSYLVANIA (US) — Ants have four to five times more odor receptors than most other insects, say scientists, who completed the first full map of their olfactory system. 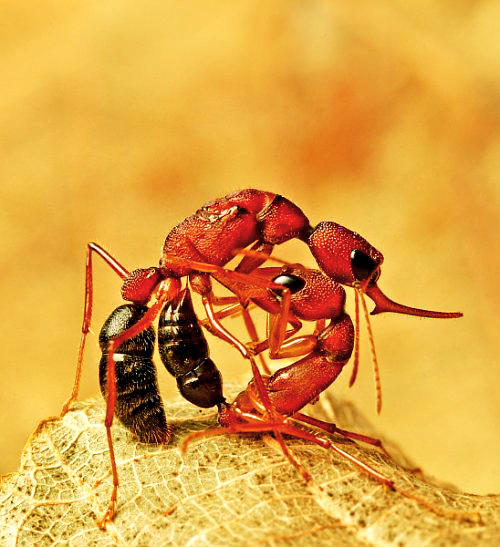 Indian jumping ants (Harpegnathos saltator) live in small groups, and the difference between the queen and workers is limited. Some workers can mate and lay fertilized eggs. (Credit: Kalyan Varma via Wikimedia Commons)

“The most exciting moment for me was when the analysis came back showing that we had identified more than 400 OR genes, the largest number of any known insect species,” says Xiaofan Zhou, the research associate who headed up the characterization process.

“It meant that we had successfully taken the first step toward gaining a new level of understanding of the complex social system that has made ants one of the most successful families on the planet.”

People have long been intrigued and inspired by ants’ ability to form highly organized colonies with division of labor, communication between individuals, and ability to solve complex problems.

For some time, scientists have also known that chemical communication plays an important role in ant behavior. “So it’s a reasonable supposition that this dramatic expansion in odor-sensing capability is what allowed ants to develop such a high level of social organization,” says Laurence Zwiebel, professor of biological sciences, who directed the new study that was published in PLoS Genetics.

Zwiebel’s team characterized the olfactory systems of two distinctly different ant species as part of a project headed by Danny Reinberg of New York University and funded by the Howard Hughes Medical Institute.

In 2010, the project sequenced the genomes of the two species—the Florida carpenter ant (Camponotus floridanus) and the Indian jumping ant (Harpegnathos saltator)—for the first time. This effort set the stage to make the detailed olfactory study possible.

The olfactory system of most insects is centered in their antennae and is broadly made up of three different classes of receptors: odorant receptors (ORs), that identify different aromatic compounds and pheromones; gustatory receptors (GRs), that distinguish between different tastes and react to some pheromones; and newly discovered ionotropic glutamate receptors (IRs), that are narrowly tuned to various poisonous and toxic compounds.

The study found that the primary expansion in the ant’s olfactory system is focused on ORs. The number of GRs and IRs are comparable to those found in other insects.

The initial automated analysis of the two ant genomes found only about 100 genes for ORs and ten GRs. “We knew these numbers were low because olfactory receptors are very difficult to identify,” Zhou says. So he and his colleagues designed a novel automated bioinformatic process for this purpose, combined with extensive manual evaluation.

The researchers also compared both the identity and expression levels of ORs in the two species and found significant differences. This wasn’t surprising because the two species were selected to reflect the high level of diversity that exists within the ant family.

Carpenter ants live in large colonies with long-lived queens that produce all the fertilized eggs. There are two castes of sterile workers. When the queen dies so does the colony. Jumping ants, by contrast, live in small groups, the difference between the queen and workers is limited, and some workers can mate and lay fertilized eggs.

“The differences in receptors are most probably associated with the difference in lifestyles of the two species,” Zhou says.

Similarly, their analysis found important differences in the ORs in the antennae of males and females. Overall, they found that the males have only one third the number of ORs that the females express. “The primary role of males is fertilization of eggs, so we assume that the ORs that males express and that females don’t are probably tuned to pheromones produced by the queen,” Zhou says.

The team also took the initial steps in identifying the chemical signals that set off specific ORs. Research Associate Jesse Slone adapted an assay that the group initially developed for matching ORs with chemical signals in the malaria mosquito.

The assay involves inserting the gene for a receptor into frog eggs so that the receptors are expressed on the egg’s surface. By wiring the eggs and then exposing them to different chemical compounds, the eggs produce a measurable electric signal when the receptor is activated.

Slone used this assay to identify the compounds that trigger one OR on each of the ant species. He found that an aromatic compound found in anise triggered the OR from the jumping ant that he tested. The receptors were found in both males and workers. Since studies have shown that anise oil has a repellant and/or insecticidal effect on some species of insects, the compound may be a general insect repellent that this OR is designed to detect, Slone speculates.

By comparison, the OR from the carpenter ant turned out to react to a naturally occurring odorant found in cooked beef and pork. The scientists have no idea why this compound is relevant to the ants, but they did establish that the specific receptor is enhanced in workers, relative to males.

“This is just the beginning. But we have demonstrated that we have the basic tools we need to act as ‘OR detectives’ to map the ants ‘odor space’ and identify the chemical signals that trigger specific behaviors in the ant’s extensive repertoire,” Slone says.

Should hormones get universal names across species?