In general, the researchers found that resistance genes are similar among bacteria living in similar environments, with more genetic similarity seen between bacteria in the human gut and animal guts than between the human gut and the soil, for example. (Credit: Pablo Tsukayama) 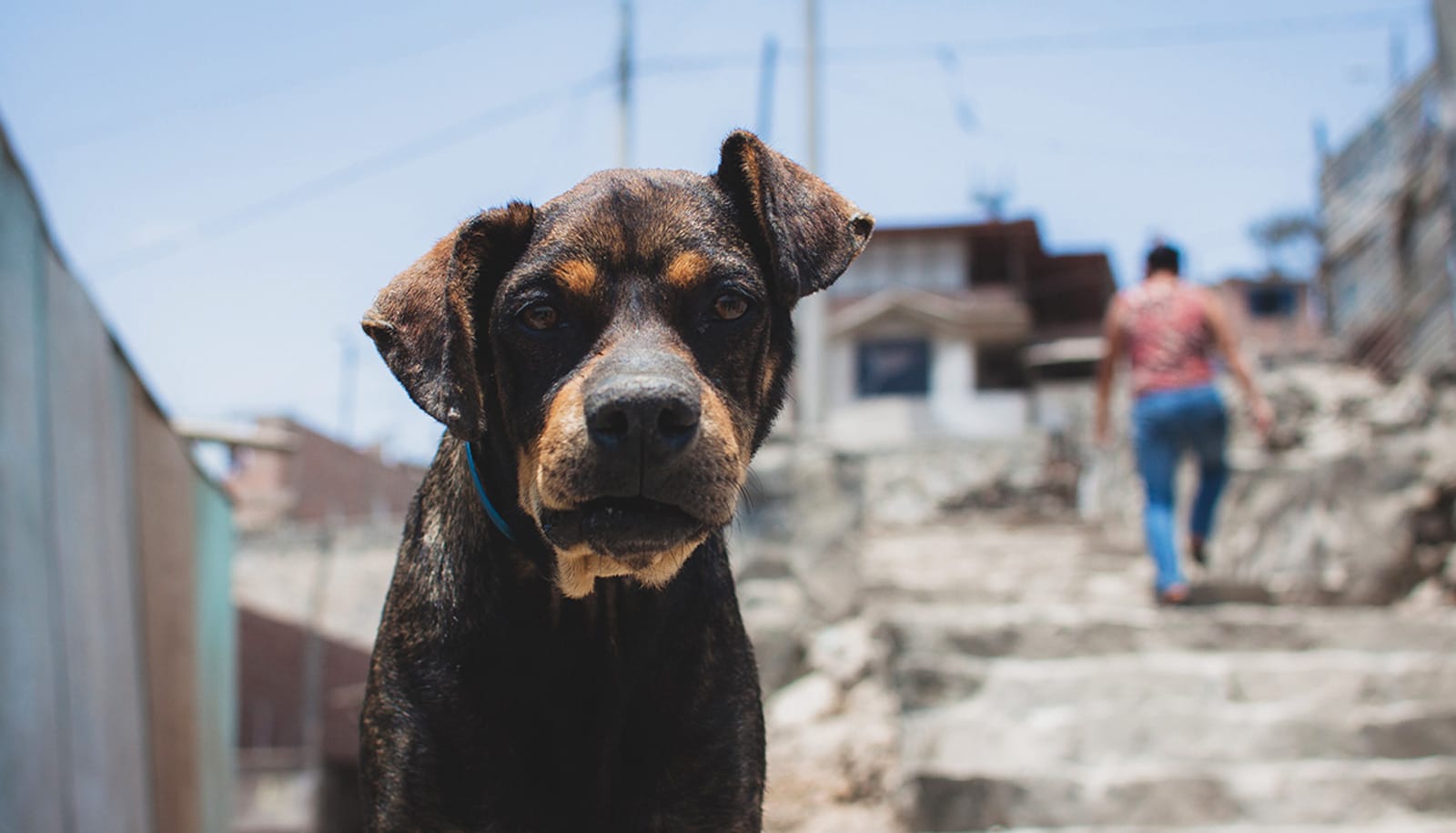 The study is the first to survey the landscape of bacteria and the genetics of their antibiotic resistance across multiple aspects of an environment, including the people, their animals, the water supply, the surrounding soil, and samples from the sanitation facilities. (Credit: Pablo Tsukayama) 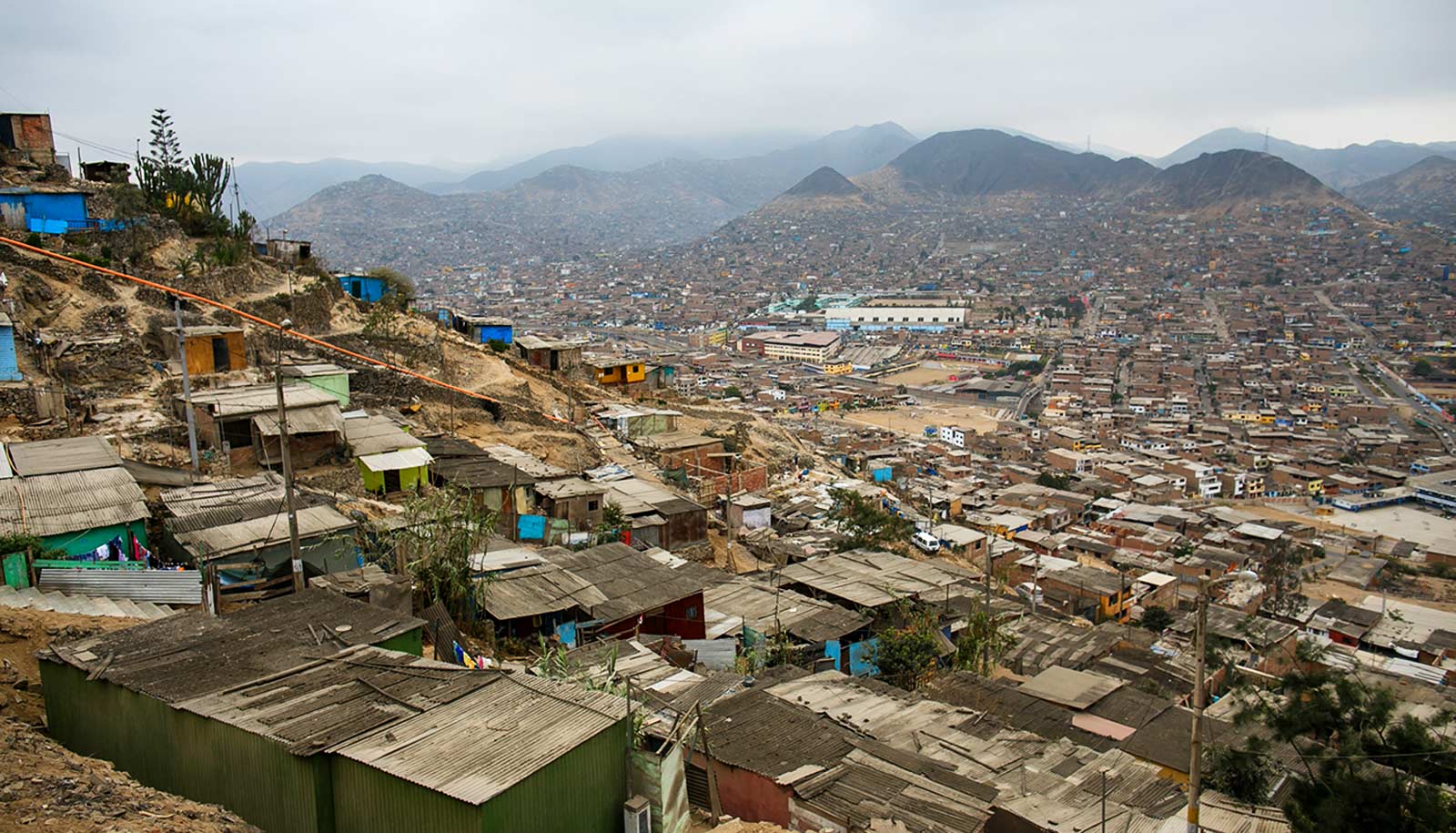 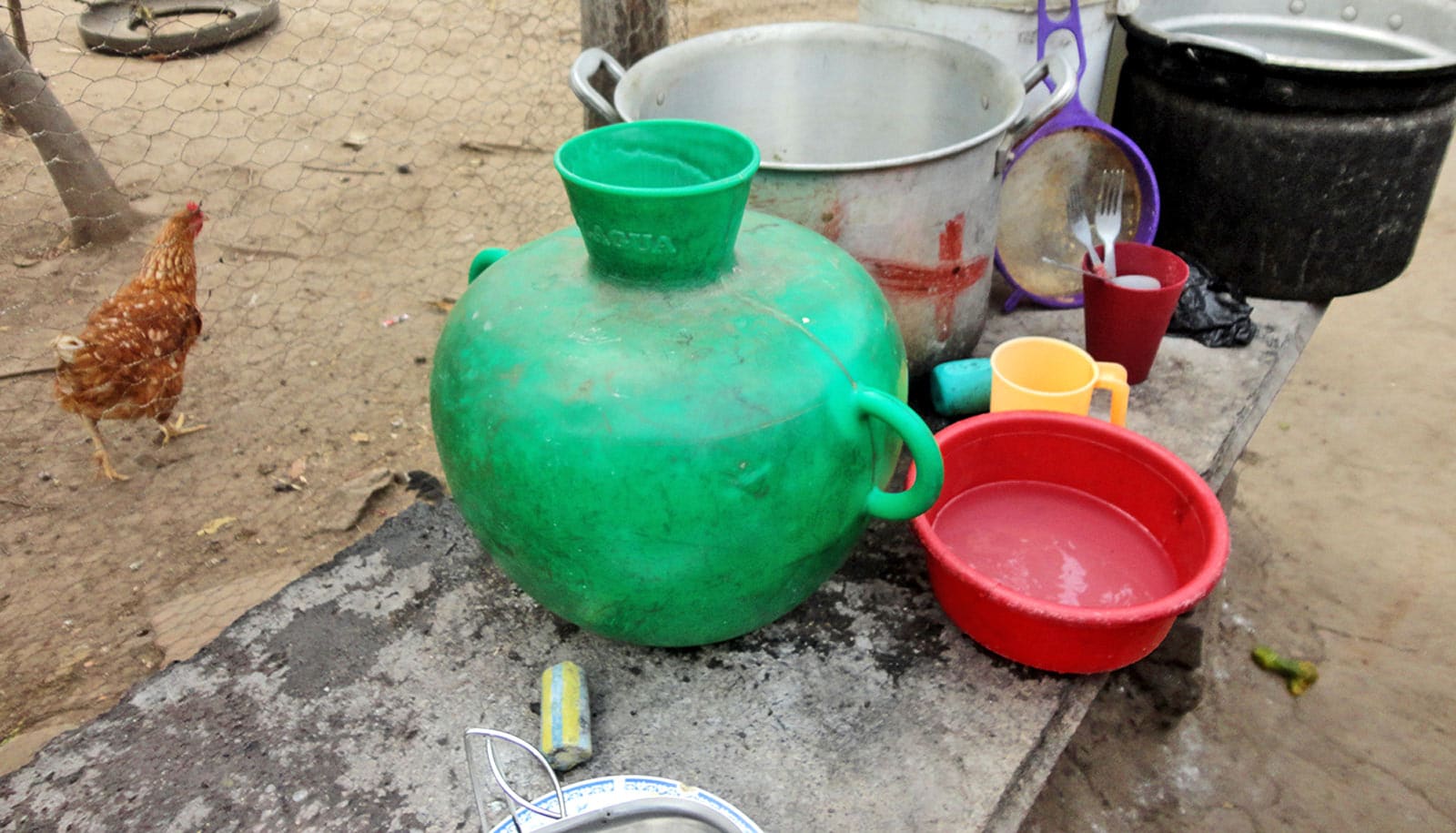 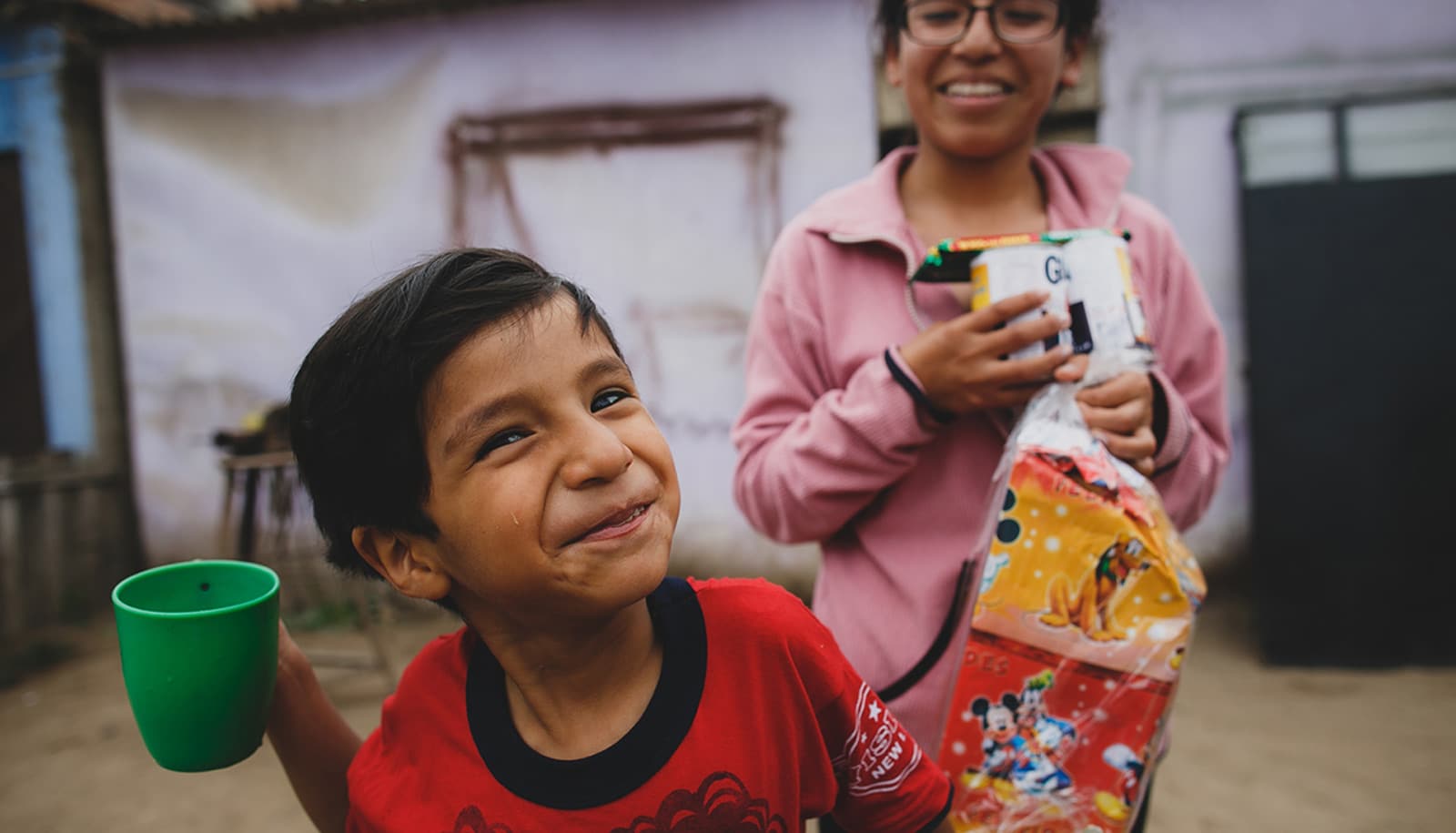 "Not only do the communities in our study serve as models for how most people live, they also represent areas of highest antibiotic use. Access to these drugs is over-the-counter in many low-income countries,"says Gautam Dantas. (Credit: Pablo Tsukayama) 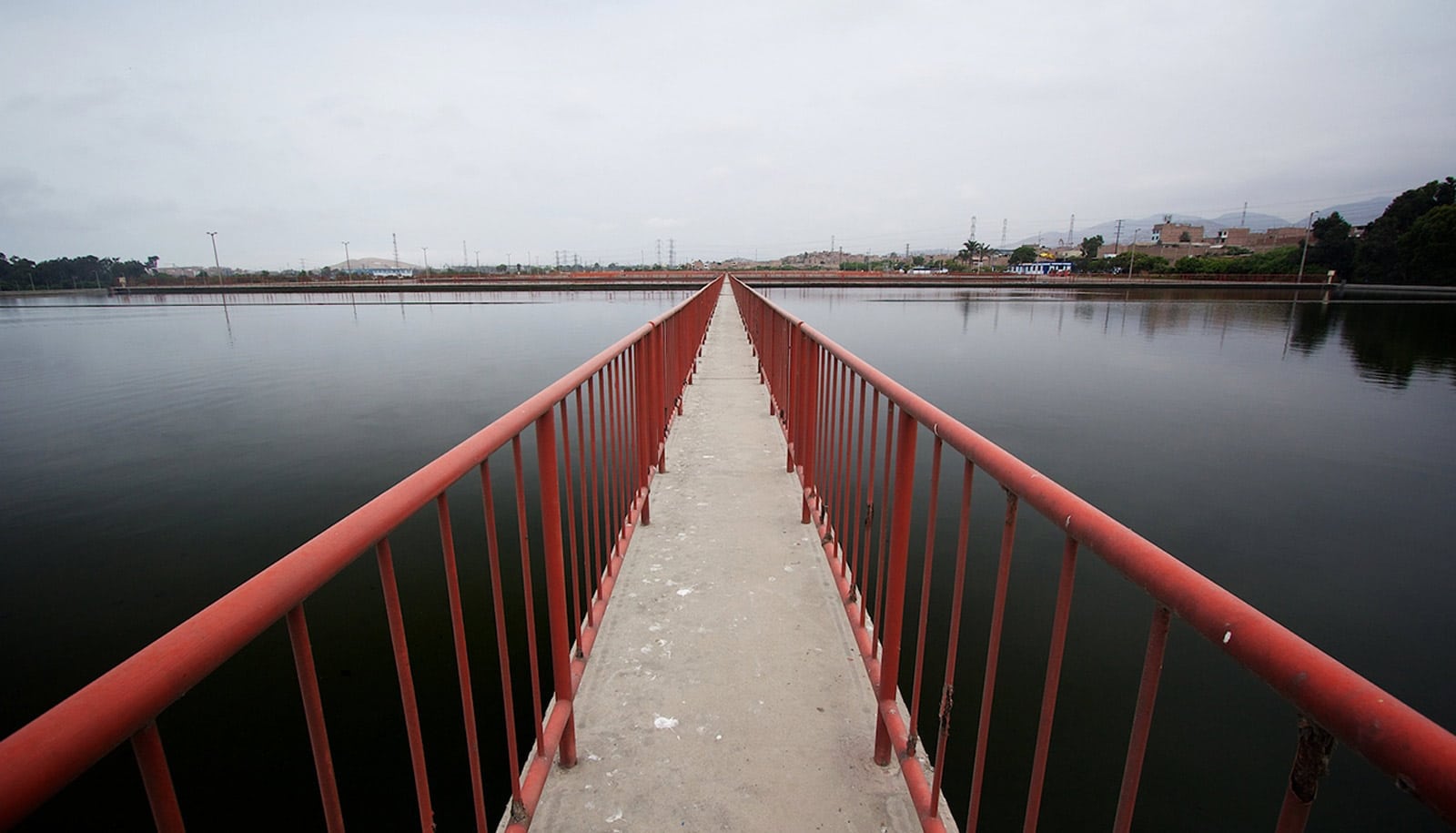 Dantas points out that this modern facility and its processes are typical of wastewater treatment plants worldwide, including those in the US. (Credit: Pablo Tsukayama) 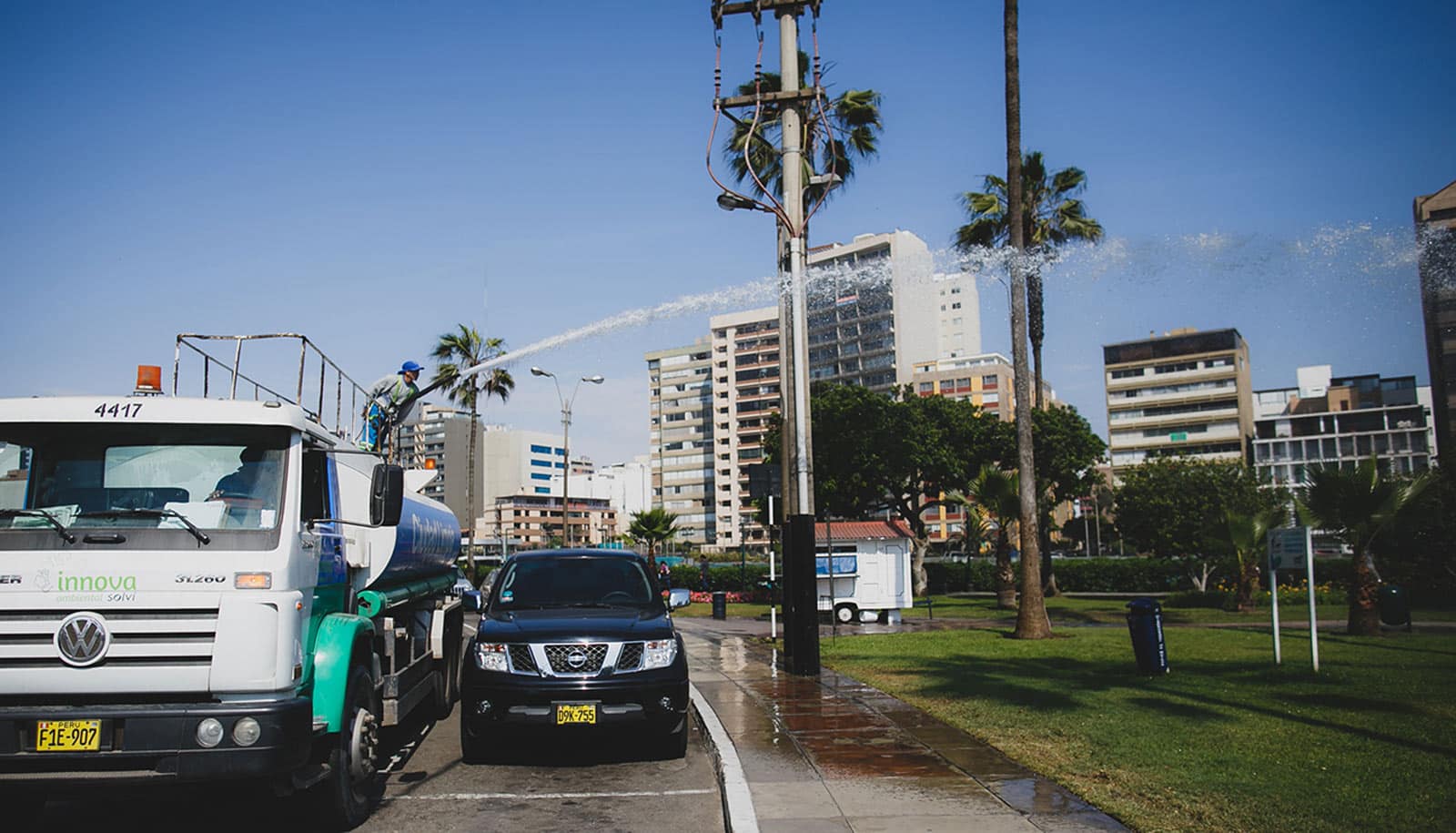 Not suitable for drinking, the outgoing "gray" water from the sewage treatment plant is released into the Pacific Ocean, and some is used to irrigate Lima's city parks. (Credit: Pablo Tsukayama)
Previous Next

From chicken coops and composting latrines to sewage treatment plants and city parks, a new study conducted in El Salvador and Peru identifies places where people are likely to encounter bacteria that can transmit antibiotic resistance.

The scientists surveyed bacteria and their capacity to resist antibiotics in a rural village in El Salvador and a densely populated slum on the outskirts of Lima, Peru. In both communities, the researchers identified areas ripe for bacteria to shuffle and share their resistance genes. These hot spots of potential resistance transmission included chicken coops in the rural village and a modern wastewater treatment plant outside Lima.

Listen to a podcast about the research:

“Bacteria can do this weird thing that we can’t—exchange DNA directly between unrelated organisms,” says senior author Gautam Dantas, associate professor of pathology and immunology at Washington University School of Medicine in St. Louis.

“That means it’s relatively easy for disease-causing bacteria that are treatable with antibiotics to become resistant to those antibiotics quickly. If these bacteria happen to come into contact with other microbes that carry resistance genes, those genes can pop over in one step. We estimate that such gene-transfer events are generally rare, but they are more likely to occur in these hot spots we identified.”

While the study was done in developing parts of the world, Dantas suggests ways the data could be relevant for the US and other industrialized countries. If the chicken coops of subsistence farmers are hot spots of resistance gene transfer, he speculates that bacteria present in industrial farming operations—where chickens regularly receive antibiotics—would see even more pressure to share resistance genes. Dantas expresses concern about such bacteria getting into the food system.

Further, the wastewater treatment facility the investigators studied in Lima is a modern design that uses technologies typical of such facilities around the world, including those in the US, which suggests these plants may be hot spots of antibiotic resistance transmission regardless of their locations.

The study is the first to survey the landscape of bacteria and the genetics of their resistance across multiple aspects of an environment, including the people, their animals, the water supply, the surrounding soil, and samples from the sanitation facilities. While the densely populated slum surrounding Lima has a district-wide sewage system and modern wastewater treatment plant, the village in El Salvador has composting latrines.

Rural villagers who rely on subsistence farming, and residents of densely populated, low-income communities surrounding cities make up a majority of the global population, yet their microbiomes are largely unstudied. Most similar studies to date have focused on heavily industrialized populations in the United States and Europe and on rare and so-called pristine communities of people living a traditional hunter-gatherer lifestyle.

“Not only do the communities in our study serve as models for how most people live, they also represent areas of highest antibiotic use,” Dantas says. “Access to these drugs is over-the-counter in many low-income countries. Since no prescription is required, we expect antibiotic use in these areas to be high, putting similarly high pressure on bacteria to develop resistance to these drugs.”

In general, Dantas and his colleagues found that resistance genes are similar among bacteria living in similar environments, with more genetic similarity seen between bacteria in the human gut and animal guts than between the human gut and the soil, for example. In addition, the researchers also found that bacteria that are closely related to one another have similar resistance genes, which might be expected as bacteria pass their genes from one generation to the next.

“The general trends we found are consistent with our previous work,” Dantas says. “We were not terribly surprised by the resistance genes that track with bacterial family trees. On the other hand, the genes we found that break the hereditary trend are quite worrisome. Genes that are the exceptions to the rule—that are not similar to the surrounding DNA—are the ones that are most likely to have undergone a gene-transfer event. And they are the resistance genes at highest risk of future transmission into unrelated bacteria.”

Of the locations sampled in the study, resistance genes that are most likely to be mobile and able to jump from one bacterial strain to another were found in the highest numbers in the chicken coops of villagers in El Salvador and in the outgoing “gray” water from the sewage treatment plant outside Lima. Not suitable for drinking, most of this water is released into the Pacific Ocean, and some is used to irrigate city parks, the researchers say.

“Soils in the chicken coops we studied appear to be hot spots for the exchange of resistance genes,” Dantas say. “This means disease-causing bacteria in chickens are at risk of sickening humans and transferring their resistance genes in the process. Our study demonstrates the importance of public health guidelines that advise keeping animals out of cooking spaces.”

As for the wastewater treatment plant, Dantas calls it the perfect storm for transmitting antibiotic resistance genes. Such facilities are excellent at removing bacteria that are well-known for causing disease and can be grown in a petri dish, such as E. coli. But that leaves room for other types of bacteria to grow and flourish.

“The system is not designed to do anything about environmental microbes that don’t make people sick,” Dantas says. “But some of these bacteria carry resistance genes that are known to cause problems in the clinic. We are inadvertently enriching this water with bacteria that carry resistance genes and then exposing people to these bacteria because the water is used to irrigate urban parks.”

Dantas and his colleagues suspect that the antibiotic resistance they measured in microbes that survive the plant’s treatment process is driven by the presence of over-the-counter antibiotics in the sewage being treated. The researchers measured antibiotic levels before and after treatment, and while most of these drug residues are removed during the process, the fact that they’re present at the beginning favors the survival of bacteria that are resistant to them.

“All the antibiotics we detected in the pre-treated water were among the top 20 sold in Peru,” Dantas says. “These findings have implications for public health, perhaps in designing future wastewater treatment plants and in making policy decisions about whether antibiotics should be available without a prescription.”

Bacteria that ‘eat’ electricity can lock away CO2