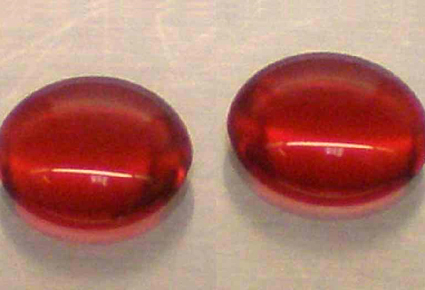 Adipogel forms a viscous droplet when isolated on a petri dish. After further processing, it can be used as a natural extracellular matrix to support new tissue growth. Structures that support the growth of living cells into tissues are highly valuable to pharmaceutical companies for testing drugs in vitro. Companies commonly use Matrigel, a protein mixture secreted by mouse cancer cells, but for that reason it can’t be injected into patients. (Credit: N. Sharma)

RICE (US)—It frequently happens in science that what you throw away turns out to be most valuable. Deepak Nagrath, a researcher at Rice University, was looking for ways to grow cells in a scaffold, and he discarded the sticky substance secreted by the cells.

“I thought it was contamination, so I threw the plates away,” says Nagrath, then a research associate at Harvard Medical School.

That substance, derived from adipose cells—body fat—turned out to be a natural extracellular matrix, the very thing he was looking for. 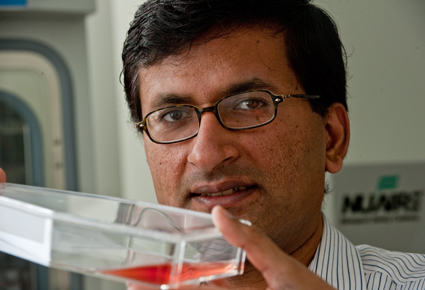 Nagrath, assistant professor in chemical and biomolecular engineering, and his coauthors have since built a biological scaffold that allows cells to grow and mature. He hopes the new material, when suffused with stem cells, will someday be injected into the human body, where it can repair tissues of many types without fear of rejection.

The research by Nagrath and his coauthors appeared recently in the Federation of American Societies for Experimental Biology Journal.

The basic idea is simple: Prompt fat cells to secrete what bioengineers call “basement membrane.” This membrane mimics the architecture tissues naturally use in cell growth, literally a framework to which cells attach while they form a network. When the cells have matured into the desired tissue, they secrete another substance that breaks down and destroys the scaffold.

Structures that support the growth of living cells into tissues are highly valuable to pharmaceutical companies for testing drugs in vitro. Companies commonly use Matrigel, a protein mixture secreted by mouse cancer cells, but for that reason it can’t be injected into patients.

“Fat is one thing that is in excess in the body. We can always lose it,” Nagrath says.

The substance derived from the secretions, called Adipogel, has proven effective for growing hepatocytes, the primary liver cells often used for pharmaceutical testing.

“My approach is to force the cells to secrete a natural matrix,” he says. That matrix is a honey-like gel that retains the natural growth factors, cytokines (substances that carry signals between cells) and hormones in the original tissue.

Nagrath is convinced his strategy is ultimately the most practical for rebuilding tissue in vivo, and not only because it may cost significantly less than Matrigel. “The short-term goal is to use this as a feeder layer for human embryonic stem cells. It’s very hard to maintain them in the pluripotent state, where they keep dividing and are self-renewing,” he says.

Once that goal is achieved, Adipogel may be just the ticket for transplanting cells to repair organs. “You can use this matrix as an adipogenic scaffold for stem cells and transplant it into the body where an organ is damaged. Then, we hope, these cells and the Adipogel can take over and improve their functionality.”

Researchers from Rutgers and Harvard Medical School contributed the work, supported by the National Institutes of Health and the Shriners Hospitals for Children.