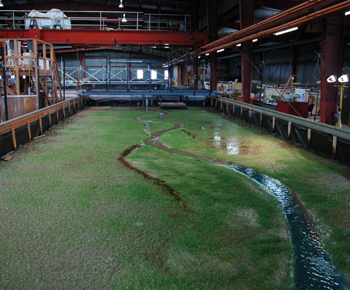 A team of researchers has built the first scaled-down meandering stream in the lab that successfully meanders without straightening out or turning into braided streams. (Credit: Christian Braudrick/UC Berkeley)

UC BERKELEY (US)—Researchers report the first experimental creation of meanders in a flume—a scaled-down model of a natural channel using alfalfa sprouts to represent vegetated stream banks. The experiments reveal some of the necessary conditions to form meanders on Earth and throughout the solar system.

Sinuous, meandering streams produce diverse and wildlife-rich habitats and are the aim of many river restoration efforts, but until now, the bank, water flow, and sediment conditions required to form and maintain meanders have been largely a matter of speculation.

No one has been able to experimentally create self-sustaining meanders in the lab, and numerous restored meanders have straightened out or turned into multi-channel “braided” rivers after the first flood.

“The money spent nationally on stream restoration is expanding exponentially, yet we’re fixing things faster than we can tell whether it’s doing any good,” says University of California, Berkeley graduate student Christian Braudrick, a former environmental consultant. “Our flume model will now let us do investigations that we can’t do in the field but, until now, haven’t been able to do in the lab, finally linking experiment with the geomorphology we see in nature.”

Graduate student Christian Braudrick and professor William Dietrich display the meandering river they created in a lab, and how their study will be applied to environmental restoration projects on earth, as well as studies of the geography of Mars.

Braudrick and William Dietrich, UC Berkeley professor of earth and planetary science, along with colleagues at San Francisco State University and Berkeley-based Stillwater Sciences, reported their results in the online early edition of the journal Proceedings of the National Academy of Sciences.

Snaking meanders like those characteristic of the lower Mississippi River are common along rivers and streams on Earth, as well as along now-dry channels on Mars and even on the frozen surface of Saturn’s moon Titan.

On Earth, they typically form in low-sloping valleys where, over the years, they wander across their floodplain, creating new floodplain deposits and leaving behind tree-lined sloughs, chutes, and oxbow lakes that team with fish, birds, mammals, and reptiles. The gravel bars, called point bars, at the inner bank of a meander also provide new surfaces that are critical for the establishment of riparian trees.

Yet, understanding how these channels form has relied until now on limited field measurements or theoretical analysis based on known physics and hydraulics—no one has been able to experimentally create meanders in a laboratory that don’t eventually turn into straight channels or braided streams, Braudrick says.

An effort to restore Uvas Creek in Gilroy, Calif., for example, ended in failure when a five-year flood stripped away the sinuous meanders leaving a braided channel, similar to the channel prior to the restoration.

Working in a gently-sloping, 6.1×17-meter (20×56-foot) box filled with sand and planted with alfalfa sprouts, he carved a 40-cm (16-inch) wide channel with a single bend at the top, turned on the water, introduced plastic and sand, and let the sproutscape rearrange itself over a total of 136 hours.

“We found that you need enough vegetation on the outer bank to slow down erosion and let the bars grow on the inner bank; otherwise, the stream cuts through the point bars and creates a braided river,” Braudrick explains.

During the experiments, as the channel migrated into chutes or the sinuosity increased, individual bends cut off as the channel took a shorter path. Over the course of the experiment, which took a year to complete and was equivalent to about 5-7 years of high stream flow, the stream formed five new bends that moved downstream as they grew, cut off and re-formed, all the while migrating laterally across the flume’s floodplain.

One key to letting real-world bars grow, he says, is fine sediment, about the size of sand, that keeps point bars from being undermined or cut through before they can grow to the elevation of the floodplain, and that plugs holes in bars before the chutes becomes cutoffs. Sand and fine sediment are today considered detrimental when restoring streams for fish spawning because of fears the sediment will cover the gravel in which fish lay their eggs.

“Eliminating fine sediment is probably not a good idea if you want to maintain a single-thread, meandering river that migrates,” Braudrick says. A naturally migrating meander, however, constantly brings new sediment in from eroded banks upstream, while also providing wood and debris for animal habitat.

Interestingly, the researchers found that mixing high flows of various heights was not essential to creating meanders, as suggested by other studies. A steady flood flow was sufficient to provide the sediment needed to maintain and build bars and erode banks.

Key to their success was the use of alfalfa sprouts, which was suggested by related experiments at the University of Minnesota, headquarters of the National Center for Earth-Surface Dynamics, of which UC Berkeley is a member. As with trees and other vegetation along natural rivers, the roots of the alfalfa sprouts provide strength to the soil and, when exposed, protect the banks from the force of the water, preventing banks from washing away too quickly.

The downside of sprouts, Braudrick says, is that they rot when repeatedly wet and take time to grow. Every three days, the experiment had to be halted for more than a week to allow the sprouts to die and be replanted. The search is on for hardier plants or other materials that will allow longer trials that should more precisely reproduce natural, long-term processes.

Also key to the success was finding a way to scale-model the fine sediment common in rivers and streams. While sand adequately models gravel, the substances used previously to represent sand did not stay suspended in the water like sand and silt. Plastic materials like those used in sand-blasting were the right size and density to remain suspended and demonstrate the importance of fine sediment in stabilizing point bars.

“This work has taken extraordinary patience and considerable trial and error by Christian to perfect the methods, but now, for the first time, we know how to make dynamic, self-maintaining meanders in the lab, and this opens up many new areas of research,” Dietrich says.

Dietrich, Braudrick, and their colleagues plan to investigate the role of various factors in determining the shape and migration rate of streams and how variables associated with climate change and land use might be expected to affect river form.

In addition, they hope to determine the conditions that allow meanders to form in permafrost absent vegetation, and on the lifeless surface of Mars.

“What’s cool is that meandering channels are all over Mars, and there’s no vegetation, so clearly the bank strength is coming from somewhere else, probably ice,” Braudrick says. “And the frozen surface of Titan has meanders. All these are vexing problems.”

The research was funded by the CALFED Ecosystem Restoration Program and the National Science Foundation, through the National Center for Earth-Surface Dynamics.

Ice on Earth’s rivers is in rapid decline