RICE (US) — Experiments with two apex predators, dragonflies and diving beetles, show that changes to an ecosystem appear long before a species disappears entirely.

The study, which appears this week in Nature Communications, suggests that scientists concerned about human influence on the biosphere need to take a deeper look at how altering the dynamics of a population—for example, by removing large members of a species through overfishing—can have measurable consequences, says Rice University ecologist Volker Rudolf.

“Natural communities are increasingly altered through human impact, and ecologists have long strived to determine how these changes influence communities,” Rudolf says. He notes the disappearance of a species is the most extreme but not the only cause of biodiversity loss. 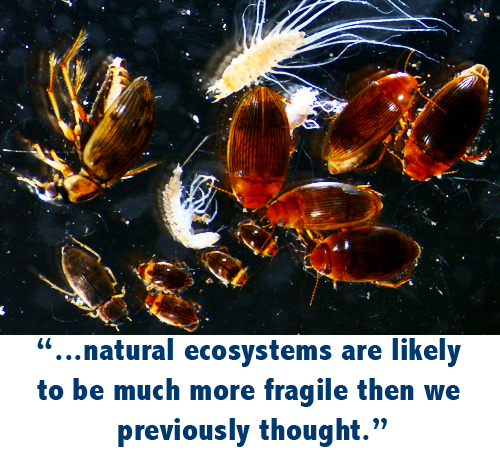 “That’s the last thing that happens after you mess up the entire ecosystem for a long period of time,” he says. By then, changes forced upon the structure of a population—such as the ratio of young to old in a species—have already been felt up and down the food chain.

Rudolf suspected species play various roles and their effects on the environment change as they progress through their life cycles, to the degree that altering these life “stages” within a species could have a significant impact. He and graduate student Nick Rasmussen made a considerable effort to prove it.

For the painstaking experiments that started in 2009, Rudolf, Rasmussen, and their colleagues chose dragonflies and water-diving beetles to represent species that have major impact on their respective communities—in this case, fishless ponds—and then created dozens of miniature environments to analyze that impact.

Manipulating the presence of different developmental stages within a predator species in each pond helped the researchers determine that such changes did alter the dynamics of complex ecosystems in a measurable way.

“Other than being the largest and most voracious predators in these communities, they’re totally different,” Rudolf says of the apex predators. “We figured if we saw any generalities across these two species, then there’s something to our theory.”

The results, he says, “challenge classical assumptions and studies that say we can make predictions by assuming that all individuals of a species are the same. You don’t expect a toddler to do the same thing as a grownup, and the same is the case for animals.”

The study could also explain why such human activities as size-selective harvesting can alter the structure of entire food webs in some ocean systems, even when no species had gone extinct and the total biomass of the targeted fish remained the same, he says.

“While these changes would be hard to predict by the classical approach, our results suggests such changes are expected when human activities alter the population structure of keystone species in an ecosystem,” Rudolf says. “Thus, natural ecosystems are likely to be much more fragile then we previously thought.”