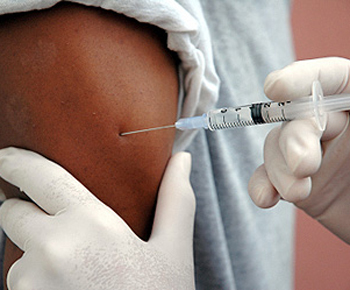 “We often tell people the vaccine doesn’t ’cause’ flu but in failing to address why they might assume that it does, we leave the door open for them to think they are avoiding illness by avoiding the vaccine,” says Lance Rintamaki.

U. BUFFALO (US)—Only 48 percent of African-American seniors get influenza vaccinations, largely because of inaccurate and incomplete information about the flu itself, safety of inoculations, and ease and necessity of the shots.

Also contributing is a lingering distrust of public health inoculation programs, because of misinformation about the notorious 1932-72 Tuskegee syphilis studies of African-American men, Lance Rintamaki, assistant professor of communications at the University at Buffalo, says in a new study published in Health Communications.

Vaccination rates for non-Hispanic white seniors are 65 percent. The low percentage of inoculations for African Americans is of concern to the medical community, Rintamaki says, because 44,000 Americans 65 and older die from influenza and its complications every year, compared to a total of 7,000 flu-related deaths in all other age groups.

The researchers found several reasons for the reluctance of African-American seniors to get flu shots. The study subjects did not understand how often they need to be vaccinated, Rintamaki says.

Some seniors thought that, like vaccines against common childhood illnesses, the flu vaccine provided lifelong protection against the flu. Many did not know they needed to be re-vaccinated every year.

“The participants knew there are different strains of influenza,” he says, “but they didn’t realize they needed to be vaccinated against each strain as it turned up.

“Some also thought—as do many members of the public—that the vaccines cause the flu. If they became sick with a virus of one kind or other around the time they had a flu shot,” he says, “they drew the erroneous conclusion that the shot made them sick.

“This is a common misperception and one that needs to be corrected,” Rintamaki adds. “We often tell people the vaccine doesn’t ’cause’ flu but in failing to address why they might assume that it does, we leave the door open for them to think they are avoiding illness by avoiding the vaccine.”

Better and more targeted messages and interventions are necessary to address concerns specific to older African Americans and to emphasize how important it is for those in this age group to be vaccinated, the researchers say.

The study involved six focus groups of African-American seniors in the Chicago area. Their average age was 75 and 85 percent of them were women. They were asked to identify their current perceptions about influenza and influenza vaccination.

Seventy-seven percent of participants said they had received the flu vaccine at some time in their life, but only 50 percent had been vaccinated the previous year.

Despite the group size and the fact that their responses cannot be projected to the community as a whole, the authors say the results of the study confirm those conducted by the Centers for Disease Control and Prevention and others.

Some disturbing news to emerge from the study, says Rintamaki, is that the Tuskegee syphilis experiments continue to affect levels of trust among African Americans toward public health programs.

The Tuskegee experiments, whose original goal was to justify treatment programs for blacks, involved 399 African-American sharecroppers infected with syphilis.

In 1932, when the study began, the available treatments were highly toxic and of limited effectiveness. The study aimed to determine if patients were better off if they were not treated with those remedies. The researchers also wanted to study the efficacy of specific remedies for individual stages of the disease.

By 1947, penicillin was commonly used as an effective cure for the disease. The researchers, however, failed to treat study participants with the medication. As a result, many men died of syphilis, wives contracted it from husbands, and children were born with congenital syphilis. The study was not discontinued until news of this fact emerged, causing a public uproar.

Rintamaki points out that although the some of the seniors interviewed were not familiar with these experiments, those who were thought that the Tuskegee researchers did more than withhold treatment. They thought they actually injected the men with syphilis.

“The Tuskegee experiments have stirred fear and suspicion in the African American community over many health initiatives,” he says, “and the suspicion they spawned has a continuing negative effect on the health of that community.

“In fighting the flu by encouraging inoculation, it is imperative that as health communicators we recognize that such fears exist and address such them,” he says.

Researchers from Northwestern University, Columbia University, and St. Francis Hospital and Medical Center in Hartford, Conn. contributed to the study.

Race and position may be factors in football player heart risks

Why mRNA vaccines won’t replace all others