MICHIGAN STATE (US) — Only five percent of people who used the bathroom washed their hands long enough to kill the germs that can cause infections, according to a new study.

The study, based on observations of 3,749 people in public restrooms, appears in the Journal of Environmental Health.

“These findings were surprising to us because past research suggested that proper hand washing is occurring at a much higher rate,” says Carl Borchgrevink, associate professor of hospitality business at Michigan State University and lead investigator on the study.

Hand washing is the single most effective thing people can do to reduce the spread of infectious diseases, according to the Centers for Disease Control and Prevention. Failing to sufficiently wash your hands contributes to nearly 50 percent of all food-borne illness outbreaks.

It takes 15 to 20 seconds of vigorous hand washing with soap and water to effectively kill the germs, the CDC says, yet the study found that people are only washing their hands, on average, for about 6 seconds. 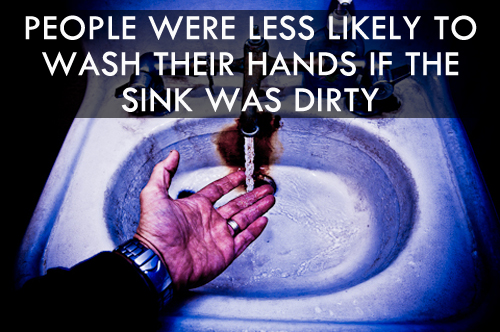 The findings have implications for both consumers and those who operate restaurants and hotels. (Credit: Joe Duty/Flickr)

Borchgrevink and colleagues trained a dozen college students in data collection and had them observe hand washing in restrooms in bars, restaurants, and other public establishments. The student researchers were as unobtrusive as possible—by standing off to the side and entering results on a smart phone, for example.

The study is one of the first to take into account factors such as duration of the hand washing and whether people used soap.

Borchgrevink, who worked as a chef and restaurant manager before becoming a researcher, says the findings have implications for both consumers and those who operate restaurants and hotels.

“Imagine you’re a business owner and people come to your establishment and get foodborne illness through the fecal-oral route—because people didn’t wash their hands—and then your reputation is on the line,” he says. “You could lose your business.”

Robotic swimmer shows how microorganisms get around