VANDERBILT (US) — The drastic measures bacteria take to become drug-resistant can also act as a powerful tool for discovering new drugs, report researchers.

The findings should give a major boost to natural products drug discovery—the process of finding new drugs from compounds isolated from living organisms—by substantially increasing the number of novel compounds that scientists can extract from individual microorganisms. 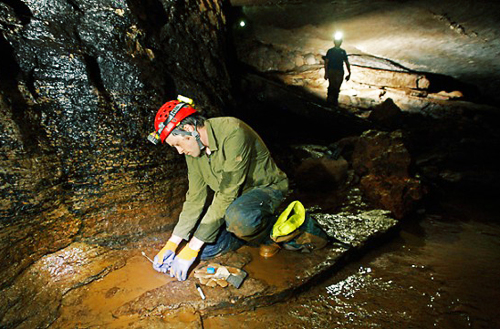 Study author Brian Bachmann will be applying the results of this study to increase the productivity of the program to search for novel drugs produced by cave-dwelling microorganisms that he started several years ago. (Credit: Vanderbilt)

Bacteria have traditionally been the source of important drugs such as antibiotics and anticancer agents. Researchers looking for new bacterially synthesized drugs have long known that bacterial genomes contain a large number of “silent genes” that contain the instructions for making drug-like compounds.

But, until now, scientists have found it is very difficult to find ways to turn on the production of these compounds, known as secondary metabolites.

While investigating how bacteria develop drug resistance, Vanderbilt University biochemists Brian Bachmann and John McLean discovered that strains of antibiotic-resistant bacteria express hundreds of compounds not produced by their progenitors, many of which are potential secondary metabolites.

“It’s as if the bacteria respond to the assault by the antibiotic with a ‘save-all-ships’ strategy of turning on hundreds of silent genes,” says Bachmann, associate professor chemistry.

“This technique is something like fracking in the natural gas industry. We’ve known for a long time that there were large amounts of underground natural gas that we couldn’t extract using conventional methods but now we can, using hydraulic fracturing technology. In a similar fashion we think we can use bacteria’s antibiotic resistance to intensively mine the bacterial genome for new drug leads,” he says.

The original purpose of the study, which appears early online in the Proceedings of the National Academy of Sciences, was to take the most detailed look yet at what happens when microbes develop drug resistance. Bachmann is an expert in natural products drug discovery and McLean, an assistant professor of chemistry, is a pioneer in the development of analytical instrumentation and chemical techniques that can identify thousands of different biological compounds simultaneously, such as ion mobility-mass spectrometry.

“One of the daunting challenges is to rapidly inventory the tens to hundreds of thousands of molecules the bacteria construct to live, and then to read this inventory to understand how the bacteria compensate for their changing circumstances,” says McLean.

One in a million

“The first thing that happens is almost all of the bacteria die. Less than one cell in a million survives,” says Bachmann.

They discovered that the differences were much greater than they expected. The survivors had undergone extensive mutations, not only in the genes that produce secondary metabolites but also in the housekeeping genes that alter the way they make RNA and proteins. As a result, they determined that the resistant strains produced more than 300 compounds that were not expressed by the original organism.

“The cells appear to be ‘de-repressing’ as many of their silent genes as possible. This seems like a very drastic way to become drug resistant,” Bachmann says.

McLean’s team has developed strategies that allow them to automatically identify and compare the relative uniqueness and the relative abundance of tens of thousands of molecules from which the hundreds of novel compounds were found.

“What we are looking for are new species of molecules in the mutants that are the most unique and the most abundant,” says Bachmann.

In the antibiotic-resistant Nocardiopsis strains the researchers found a total of five compounds that were both unique enough and abundant enough to isolate, determine their molecular structures and test for biological activity.

“Normally, we only find one compound per organism, so this is a significant improvement in yield, allowing us to get many new compounds from previously mined microorganisms,” Bachmann says.