"What the zombie fungi essentially do is create a sniper's alley through which their future hosts must pass," David Hughes says. (Credit: David Hughes/Penn State) 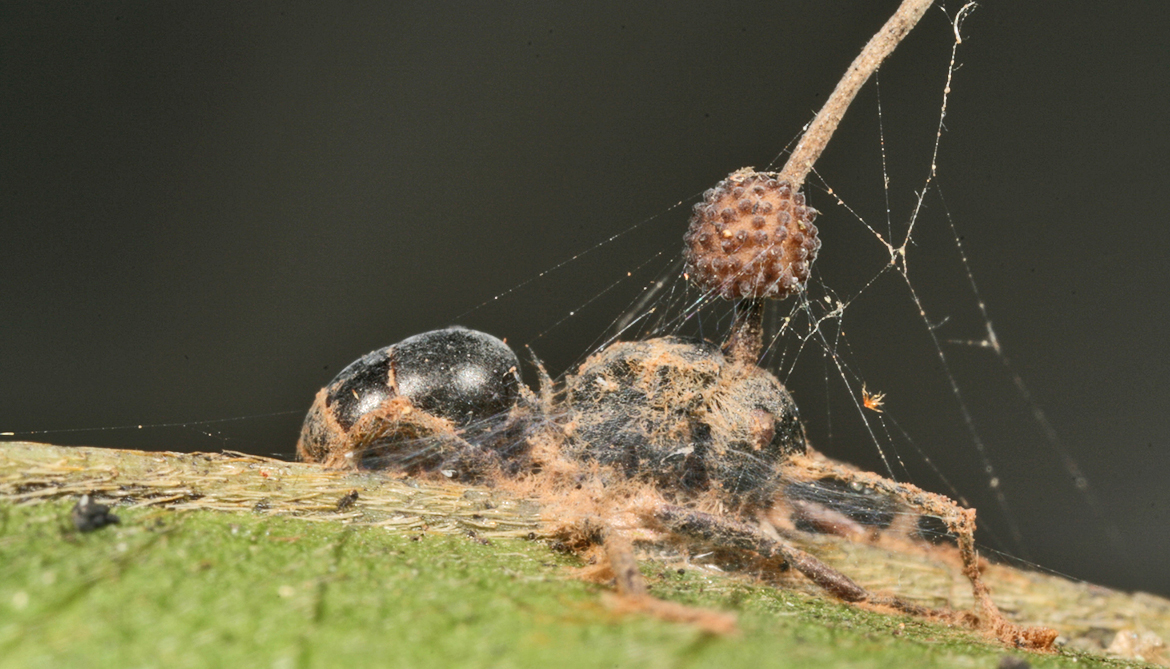 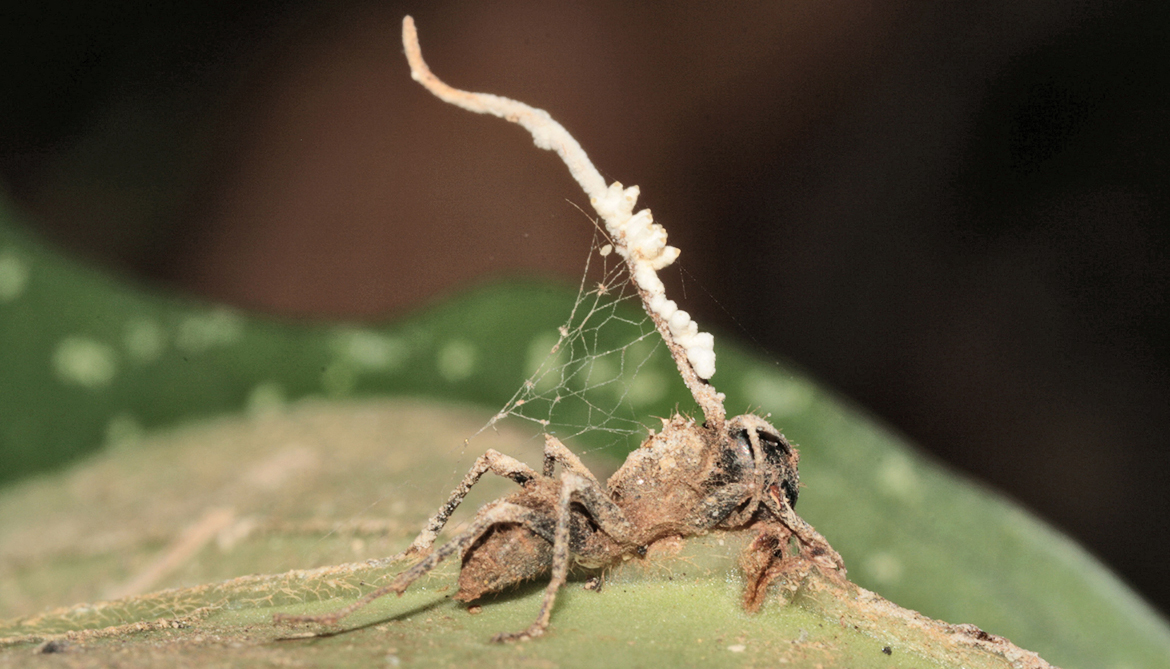 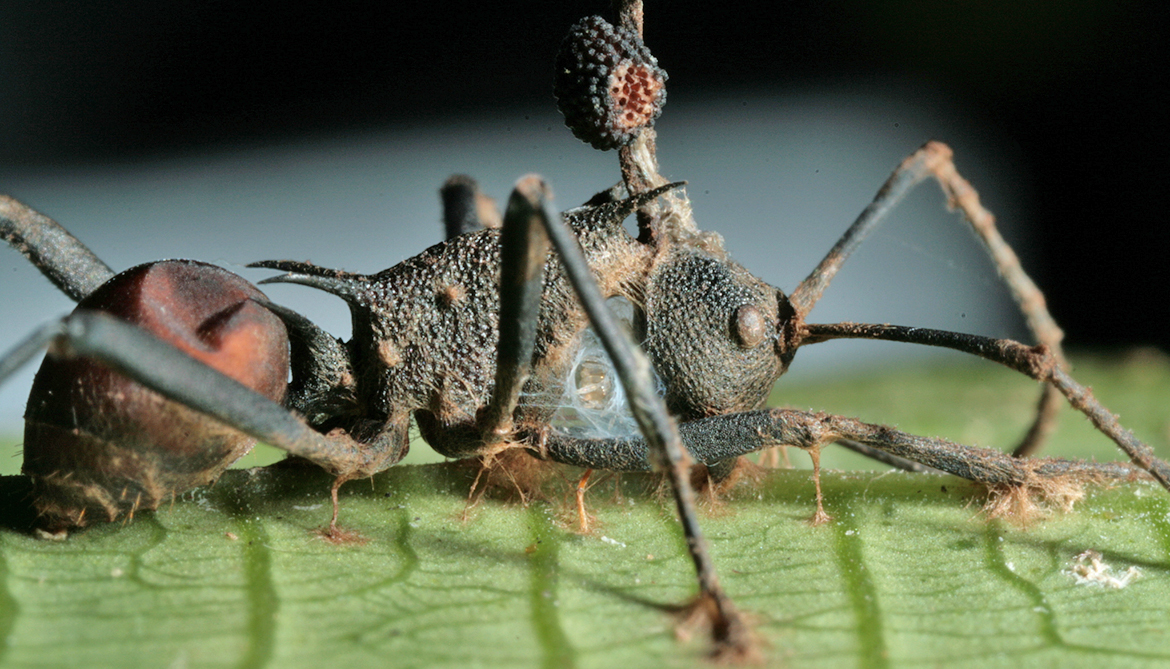 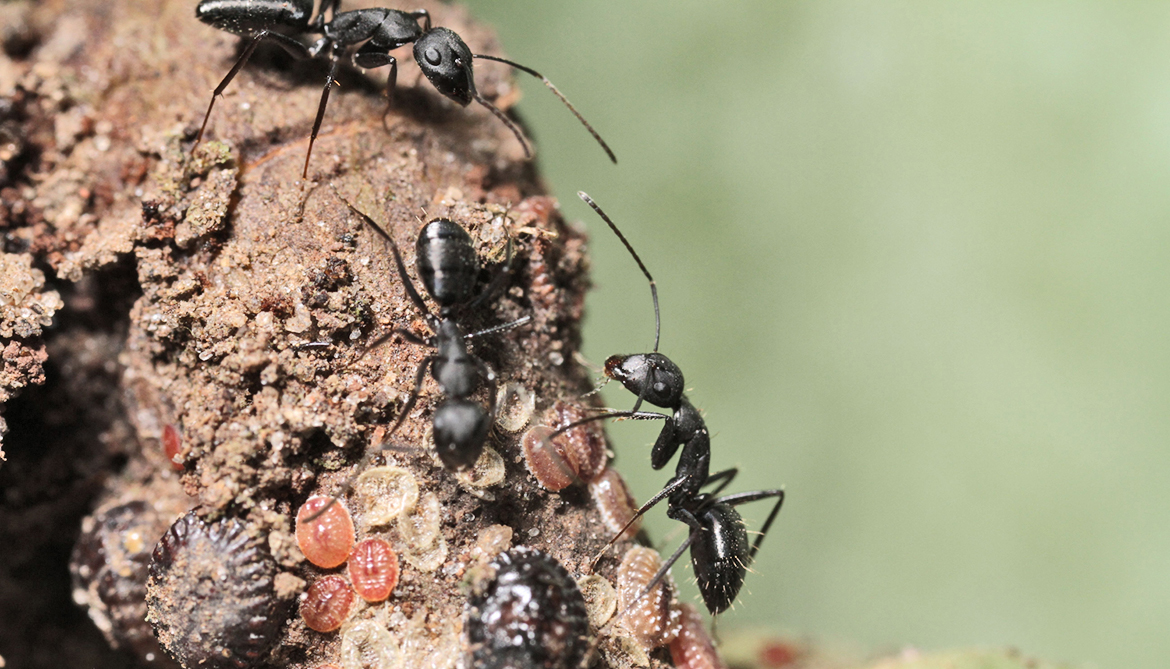 After the “zombie ant fungus” kills a victim, it grows a stalk called the stroma, which protrudes from the ant cadaver.

A large round structure, the ascoma, forms on the stroma. Infectious spores then develop in the ascoma and are released onto the forest floor below, where they can infect foraging ants from the colony.

“After climbing vegetation and biting the veins or margins on the underside of leaves, infected ants die, remaining attached to the leaf postmortem, where they serve as a platform for fungal growth,” says lead author Raquel Loreto.

This fungal reproductive activity must take place outside the ant colony, in part because of the ants’ social immunity, which is collective action taken to limit disease spread, explains study coauthor David Hughes, assistant professor of entomology and biology.

“Previous laboratory studies have shown that social immunity is an important feature of insect societies, especially for ants,” Hughes says. “For the first time, we found evidence of social immunity in ant societies under field conditions.”

The researchers tested social immunity by placing 28 ants freshly killed by the fungus inside two nests—14 in a nest with live ants and 14 in one with no ants. They found that the fungus was not able to develop properly in any of the 28 cadavers. In the nest with live ants, nine of the 14 infected cadavers disappeared, presumably removed by the ants in an effort to thwart the disease organism.

“Ants are remarkably adept at cleaning the interior of the nest to prevent diseases,” Hughes says. “But we also found that this fungal parasite can’t grow to the stage suitable for transmission inside the nest whether ants are present or not. This may be because the physical space and microclimate inside the nest don’t allow the fungus to complete its development.”

Next the researchers set out to record the prevalence of the fungus among ant colonies within the study area, which was located at the Mata do Paraíso research station in southeast Brazil. After marking and searching 22 transects covering a total of 44,000 square meters, they discovered that all 17 nests found had ant cadavers attached to leaves beside the colony, suggesting a fungal prevalence of 100 percent at the ant population level.

In a more detailed, 20-month survey of four of those ant colonies, the scientists measured parasite pressure by mapping the precise locations of fungus-killed ants and foraging trails in close proximity to the nests.

“We limited our survey to the immediate area surrounding the nest because this is the zone the ants must walk through to leave and return to the colony,” Loreto says. “To better understand the path workers ants took, we measured and mapped in 3-D the trails formed by the ants, and that allowed us to determine spatial location of potential new hosts, which would be on the foraging trails.”

By measuring the position of manipulated ants and plotting these locations with respect to the nest, the researchers established that infected ants die on the “doorstep” of the colony.

“What the zombie fungi essentially do is create a sniper’s alley through which their future hosts must pass,” Hughes says. “The parasite doesn’t need to evolve mechanisms to overcome the effective social immunity that occurs inside the nest. At the same time, it ensures a constant supply of susceptible hosts.”

Despite the high prevalence of infected colonies and persistence of the fungus over time, the researchers did not observe colony collapse, suggesting that the parasite functions as a long-lasting but tolerable condition for the ants. The research findings appear in PLOS ONE.

“We suggest that the parasite can be characterized as a ‘chronic disease’ that, as in humans, can be controlled but not cured,” Loreto says.

Gene-editing gets fungi to spill secrets to new drugs

There isn’t much to love about wild mistletoe