This origami bridge includes multiple zippered tubes. The structure could serve as a model for full-sized bridges that could be folded for delivery to disaster areas and then quickly expanded to full size. (Credit: Rob Felt/Georgia Tech) 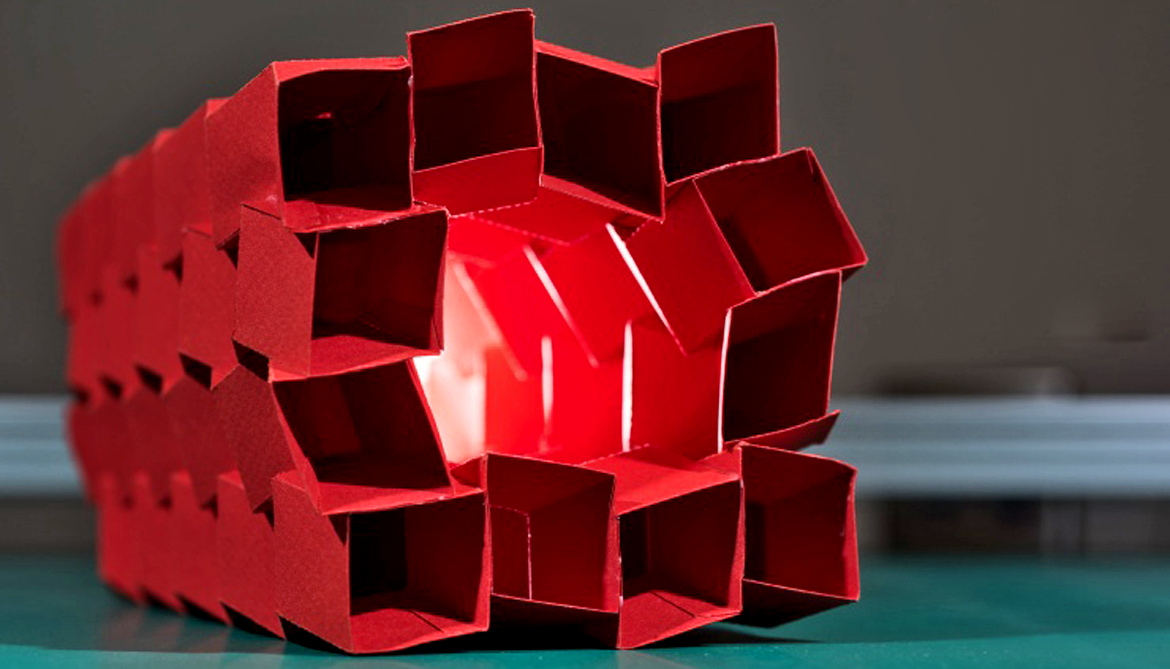 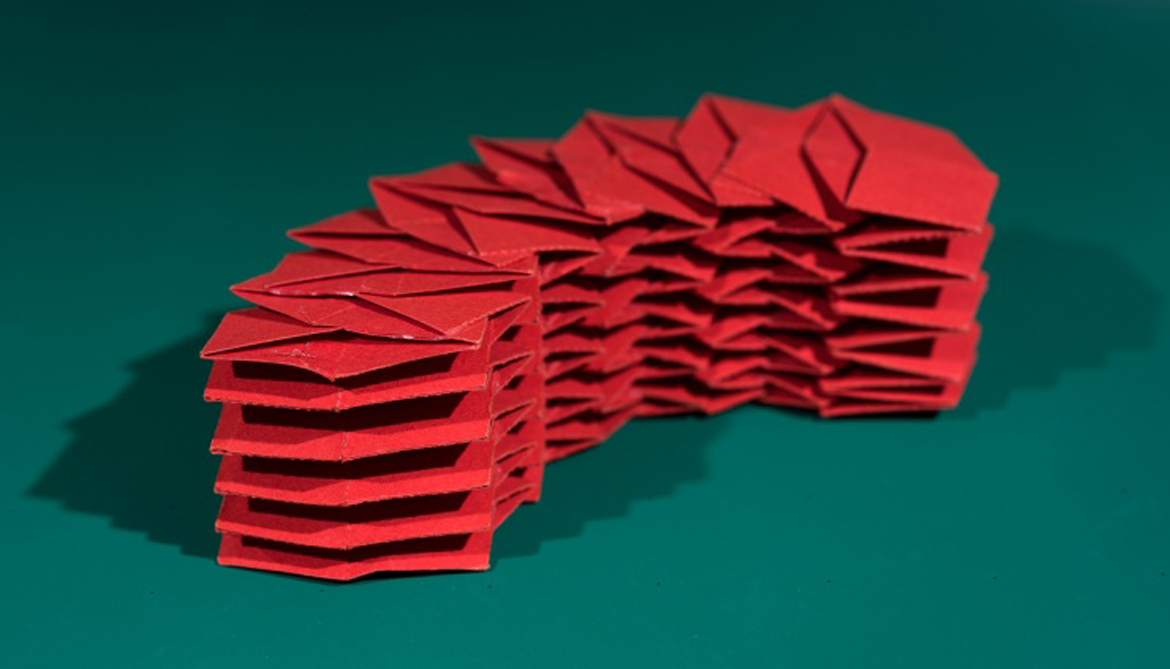 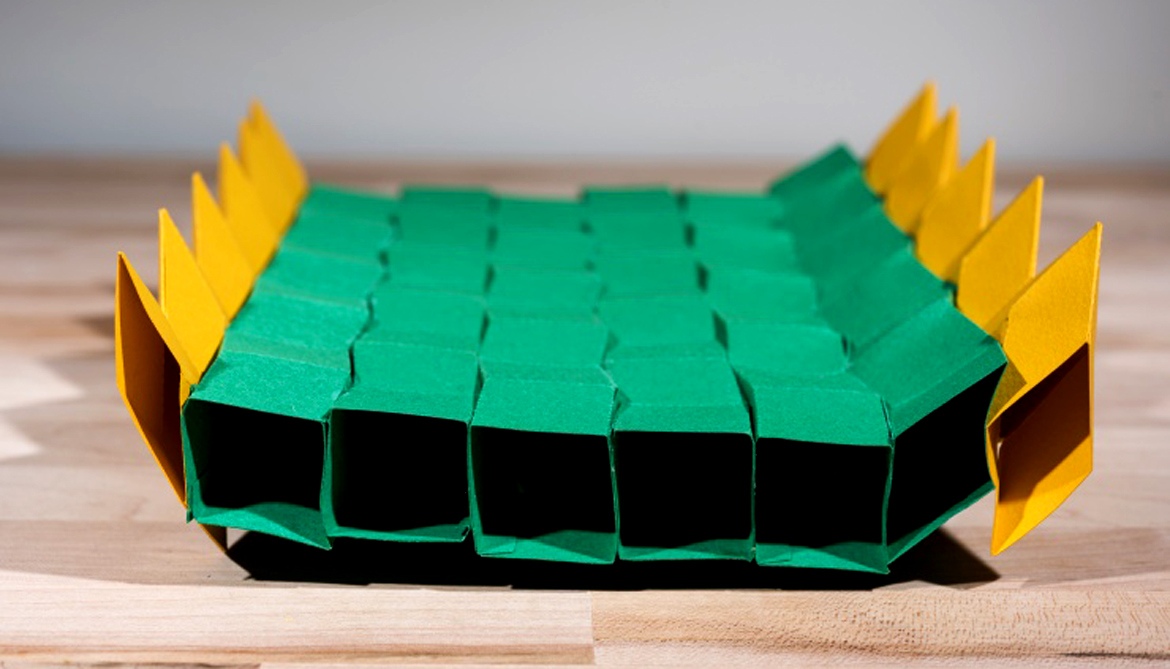 Origami structures would be useful in many engineering and everyday applications, such as a robotic arm that could reach out and scrunch up, a construction crane that could fold to pick up or deliver a load, or pop-up furniture.

Study author Glaucio Paulino, professor at Georgia Tech, sees particular potential for quick-assembling emergency shelters, bridges, and other infrastructure in the wake of a natural disaster.

“Origami became more of an objective for engineering and a science just in the last five years or so,” says coauthor Evgueni Filipov of the University of Illinois at Urbana-Champaign.

“A lot of it was driven by space exploration, to be able to launch structures compactly and deploy them in space. But we’re starting to see how it has potential for a lot of different fields of engineering. You could prefabricate something in a factory, ship it compactly, and deploy it on site.”

The researchers use a particular origami technique called Miura-ori folding. They make precise, zig-zag folded strips of paper, then glue two strips together to make a tube. While the single strip of paper is highly flexible, the tube is stiffer and does not fold in as many directions.

The researchers tried coupling tubes in different configurations to see if that added to the structural stiffness of the paper structures. They found that interlocking two tubes in zipper-like fashion made them much stiffer and harder to twist or bend. The structure folds up flat, yet rapidly and easily expands to the rigid tube configuration.

“The geometry is what really plays a role,” Paulino says. “We are putting two tubes together in a strange way. What we want is a structure that is flexible and stiff at the same time. This is just paper, but it has tremendous stiffness.”

The zipper configuration works even with tubes that have different angles of folding. By combining tubes with different geometries, the researchers can make many different three-dimensional structures, such as a bridge, a canopy, or a tower.

“The ability to change functionality in real time is a real advantage in origami,” Filipov says. “By having these transformable structures, you can change their functionality and make them adaptable. They are reconfigurable. You can change the material characteristics: You can make them stiffer or softer depending on the intended use.”

The team uses paper prototypes to demonstrate how a thin, flexible sheet can be folded into functional structures, but their techniques could be applied to other thin materials, Filipov says. Larger-scale applications could combine metal or plastic panels with hinges.

Next, the researchers plan to explore new combinations of tubes with different folding angles to build new structures. They also hope to apply their techniques to other materials and explore applications from large-scale construction to microscopic structures for biomedical devices or robotics.

“All of these ideas apply from the nanoscale and microscale up to large scales and even structures that NASA would deploy into space,” Paulino says. “Depending on your interest, the applications I think are endless. We have just scratched the surface. Once you have a powerful concept, which we think the zipper coupling is, you can explore applications in many different areas.”

University of Tokyo professor Tomohiro Tachi also contributed to the paper, which appears in the Proceedings of the National Academy of Sciences. The National Science Foundation supported this work.