MICHIGAN STATE (US) — Domestic tomatoes could re-learn a thing or two from their wild cousins—like how to fight off bugs.

Long-term cultivation has led to tomato crops losing beneficial traits common to wild tomatoes. Anthony Schilmiller, Michigan State University research assistant professor of biochemistry and molecular biology, was able to identify a gene that is involved in one of these beneficial traits. 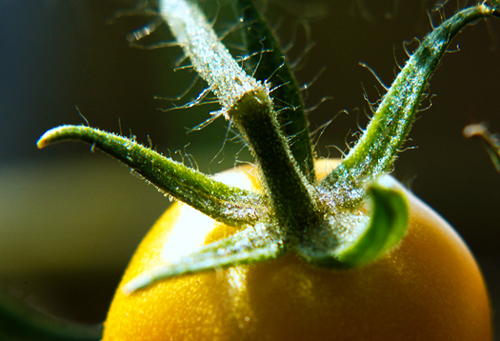 “Acyl sugars play a critical role in allowing wild tomatoes to fend off bugs,” says Michigan State researcher Anthony Schilmiller. “Because cultivated tomatoes were not bred for their acyl sugar amounts and quality, they have reduced levels compared to wild ones we do not eat.” (Credit: Salendron/Flickr)

Trichomes, or hair-like protrusions, produce a mixture of specialized chemicals that shape the interactions between the plant and its environment. The location of the chemicals allows some of them to act as the first line of defense against pests.

One class of compounds, acyl sugars, is a frontline defender. Trichomes secrete acyl sugars to fend off pests. Schilmiller teamed with Robert Last, professor of biochemistry and molecular biology, and Amanda Charbonneau, doctoral researcher, to try to understand how these chemicals are made. Their findings appear on the cover of this week’s Proceedings of the National Academy of Sciences.

Little was known about how acyl sugars were produced until now, and this research identifies and describes the first gene that participates in the production of the protective sugars in cultivated tomatoes, Schilmiller says.

“Acyl sugars play a critical role in allowing wild tomatoes to fend off bugs,” he says. “Because cultivated tomatoes were not bred for their acyl sugar amounts and quality, they have reduced levels compared to wild ones we do not eat.

“Understanding how they are made is the first step toward breeding cultivated tomatoes, and other plants in this family, to make them more resistant to herbivores.”

Other crops in the Solanaceous family that could benefit from this research include potatoes, peppers, eggplants, and petunias.

In addition, this work shows that the newly discovered gene is active only in one specific cell of one trichome type.

“Not only will we be able to potentially engineer heartier tomatoes, but understanding how to specifically target trichome gene expression without affecting the fruit, we’ll also be able to add other important chemicals for insect resistance and possibly other beneficial traits to the surface of the plants,” Schilmiller says.

Dairy cows have it worse than beef cows

Emergency programs provided kids with 1.5B meals a month in 2020