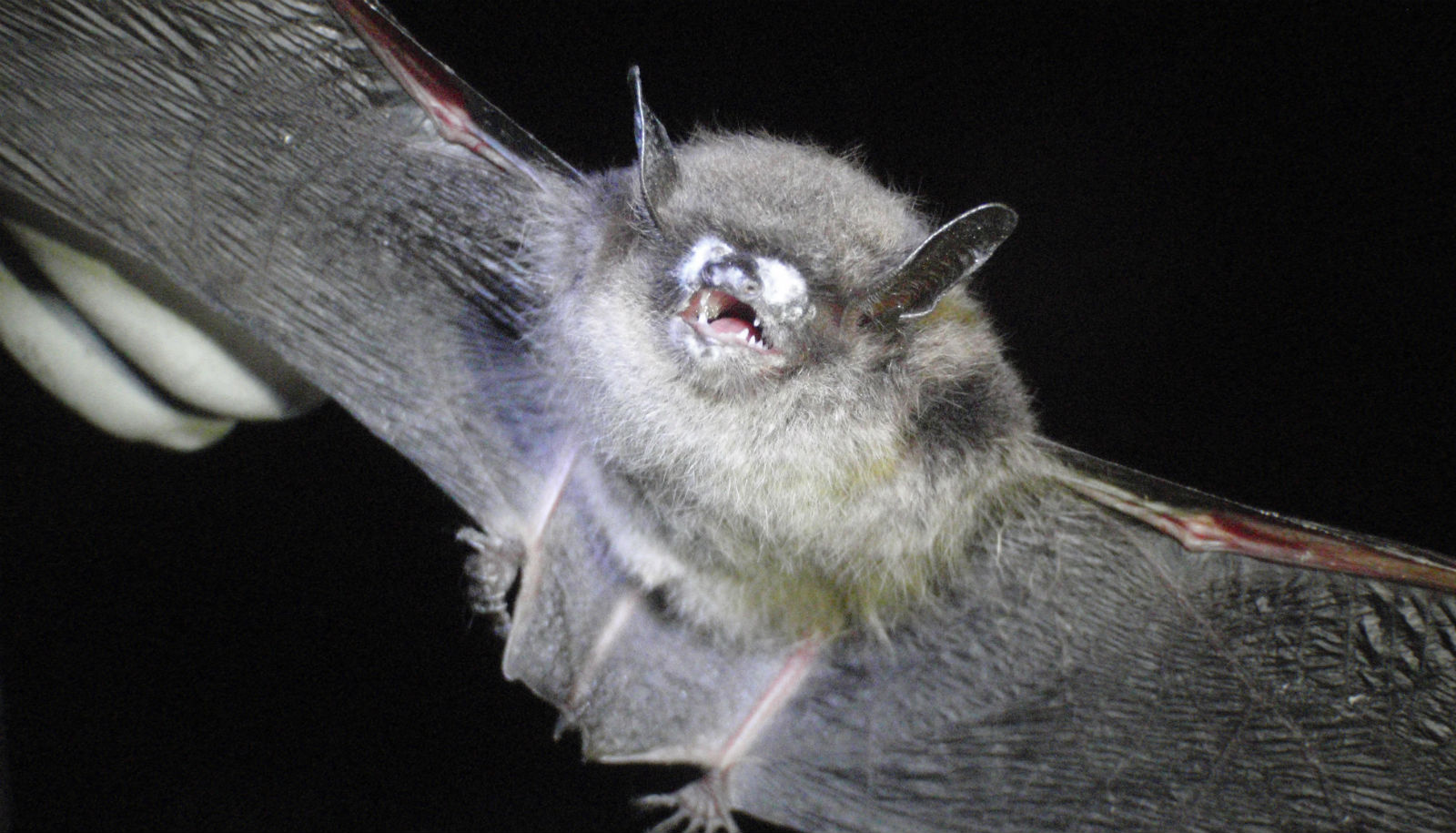 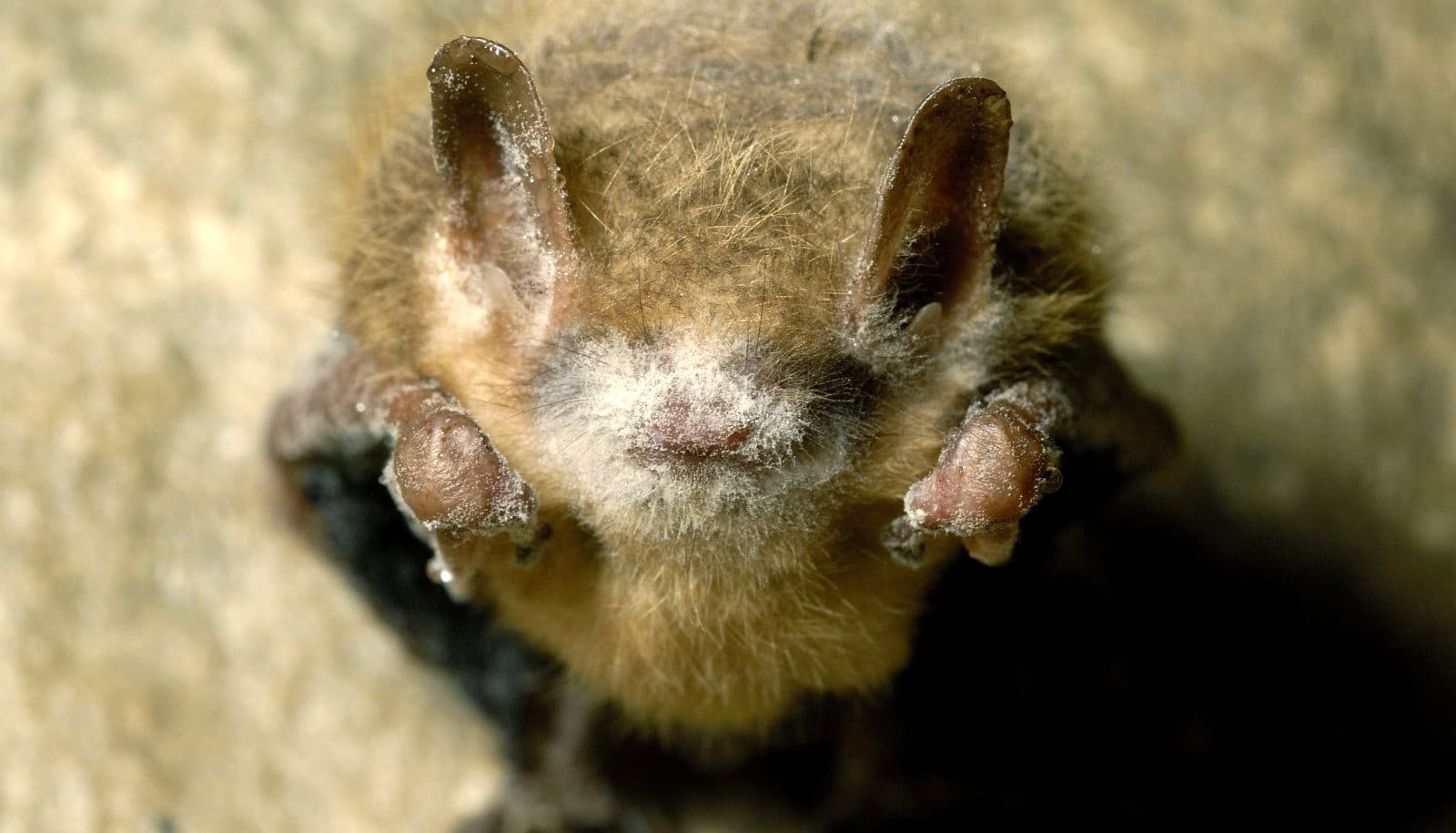 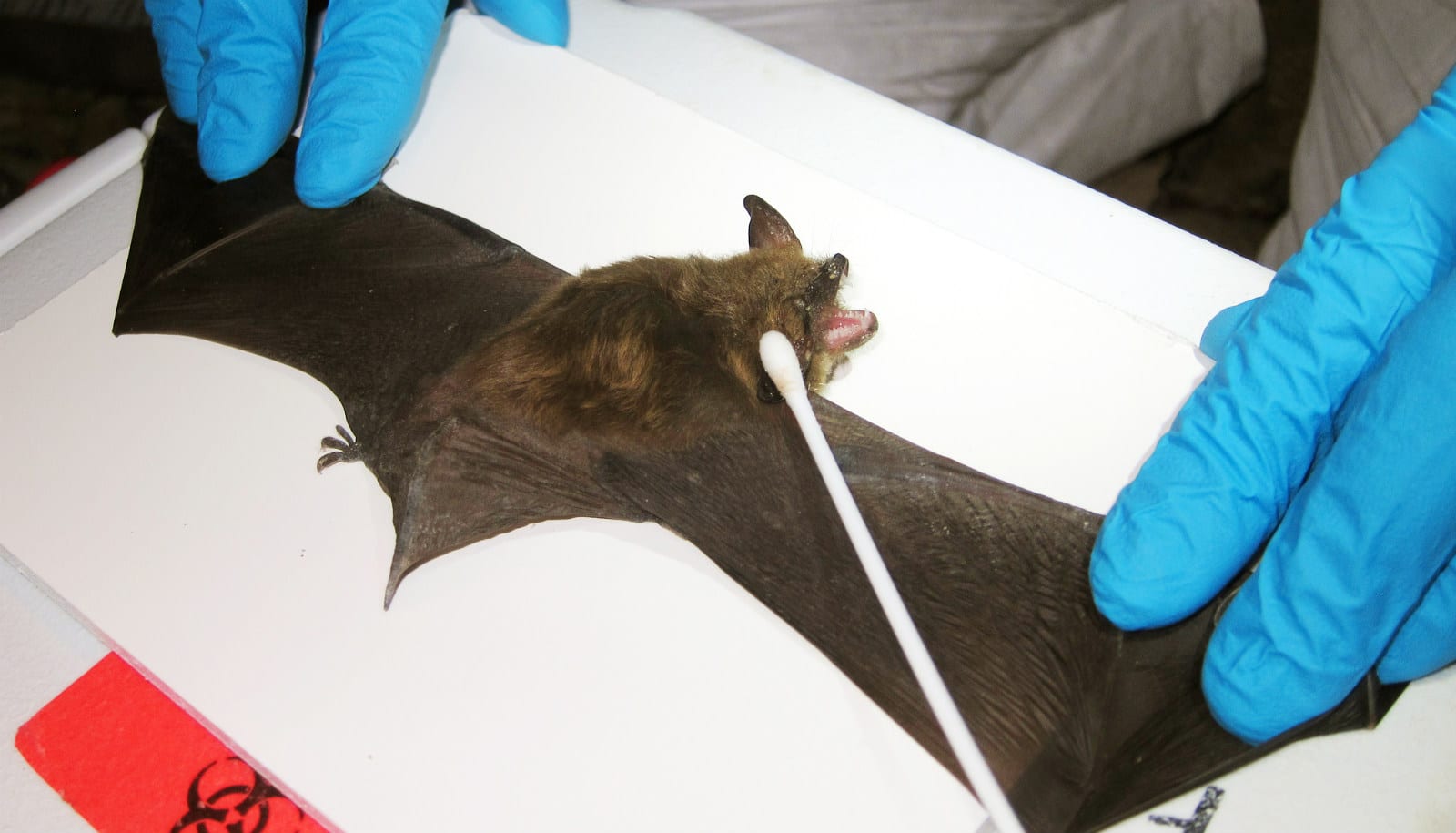 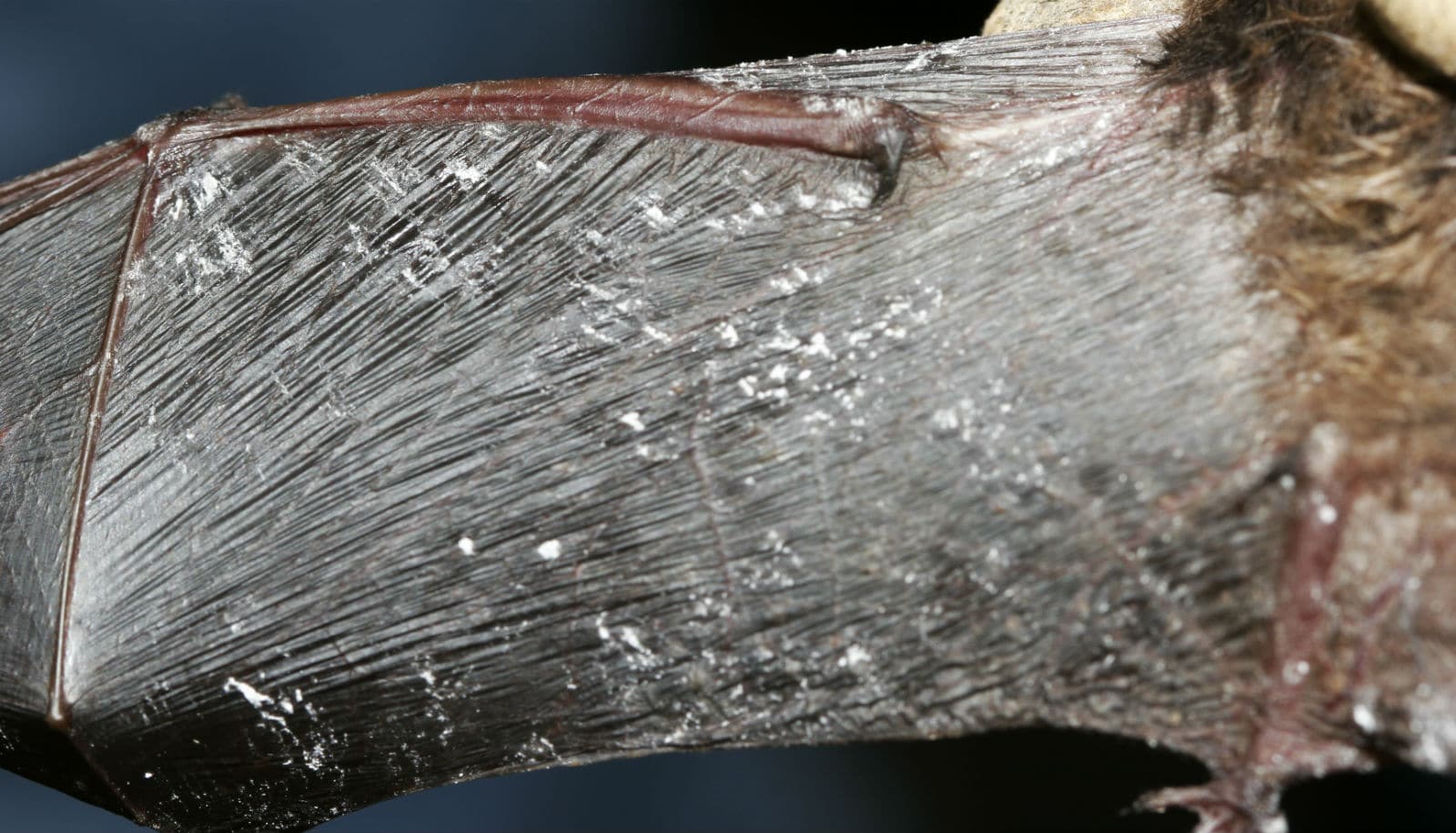 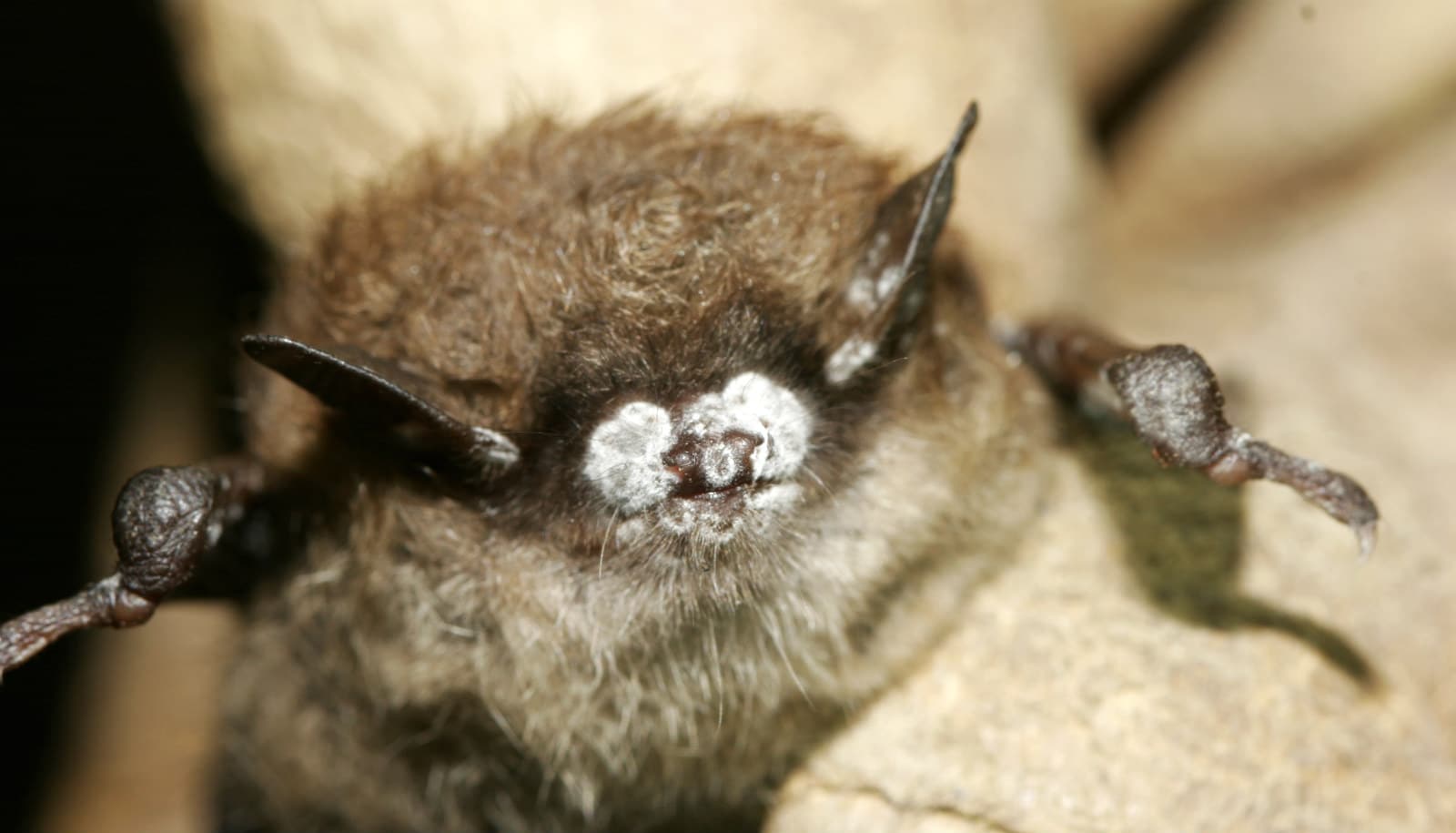 A lethal fungus has killed an estimated 6 million bats in the US and Canada since researchers identified it in 2006. First discovered in New York, the disease has spread to 29 states and four Canadian provinces.

Some of the most prevalent species in the Northeast have suffered estimated mortality as high as 99 percent.

Now scientists have discovered a virus that infects the fungus, Pseudogymnoascus destructans, which causes white-nose syndrome in bats. They say it may be possible to track how its spreading by identifying regional variations in the virus.

Although several species of bats have been affected, some of the most prevalent species in the Northeast US—such as little brown bats—have suffered estimated mortality as high as 99 percent.

These losses have serious ecological implications. For instance, bats have a voracious appetite for insects and are credited with helping to control populations of mosquitoes and some agricultural pests.

The researchers examined 62 isolates of the fungus, including 35 from the United States, 10 from Canada, and 17 from Europe, with the virus infection found only in North American samples.

P. destructans is clonal, meaning it is essentially identical everywhere it has been found in North America, making it difficult to determine how it is moving, says Marilyn Roossinck, professor of plant pathology and environmental microbiology at Penn State.

“But the virus it harbors has quite a bit of variation,” she says. “For example, in all the fungal isolates from Pennsylvania we analyzed, the viruses are similar. But those viruses differ from the ones we found in isolates from Canada, New York, and so forth.”

How bats track bugs through trees

Roossinck explains that fungal viruses are not readily transmitted among fungi, so the variation in the viral genome probably is occurring as the virus evolves within each fungal isolate, providing a marker.

“So we believe the differences in the viruses reflect the movement of the fungus, and this viral variability should enable us to get a better handle on how the disease is spreading,” she says.

Does the virus help the fungus?

The virus is not thought to cause disease, but researchers don’t yet know whether it influences the virulence of the fungus, Roossinck says.

“It’s very difficult to study virulence in terms of infection in the bats in part because there are almost no bats left to study, and we don’t have an experimental system that works.”

The researchers, who report their results in PLOS Pathogens, were able to eliminate the virus from one fungal isolate, which provided a virus-free isolate that they could compare to wild isolates that harbor the virus to look for biochemical changes.

“Although we didn’t look directly at the role of the virus in white-nose syndrome, there is evidence of a close biological relationship between the fungus and the virus,” Roossinck says. “We found that the virus-free isolate makes many fewer spores than an isolate with the virus, suggesting that the virus may be beneficial to the fungus in reproduction.

“We don’t know whether the fungus spreads through spores or through direct contact between bats,” she says. “But if it spreads via spores, the virus actually could be enhancing the spread of white-nose syndrome as a result of this increased spore production.”

Roossinck says the study has important implications in the search for ways to save the bats of North America.

“There’s a lot we don’t know about white-nose syndrome, and before we can develop control strategies, we have to better understand the biology of the system. We now have a tool that can be used in broader studies to examine the epidemiology of the disease.”

The Pennsylvania Game Commission and the Huck Institutes of the Life Sciences and the College of Agricultural Sciences at Penn State supported the study.