"A major challenge is to endow computers with the ability to understand the context in which gestures are made and to discriminate between intended gestures versus unintended gestures," Juan Pablo Wachs says. (Credit: iStockphoto)

Doctors may soon be using a gesture-recognition system in the operating room that identifies hand gestures to browse and display images of the patient.
Surgeons routinely need to review medical images and records during surgery, but stepping away from the operating table and touching a keyboard and mouse can delay the procedure and increase the risk of spreading infection-causing bacteria, says Juan Pablo Wachs, an assistant professor of industrial engineering at Purdue University. 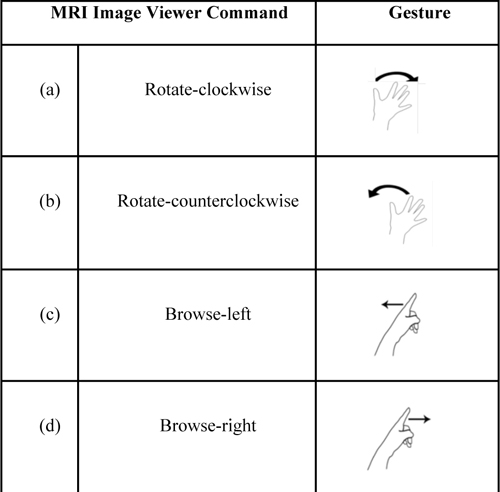 This table shows a few of hand gestures surgeons might use in the operating room to browse and display medical images of the patient during an operation. View the full chart.

“One of the most ubiquitous pieces of equipment in US surgical units is the computer workstation, which allows access to medical images before and during surgery,” he says. “However, computers and their peripherals are difficult to sterilize, and keyboards and mice have been found to be a source of contamination.

Also, when nurses or assistants operate the keyboard for the surgeon, the process of conveying information accurately has proven cumbersome and inefficient since spoken dialogue can be time-consuming and leads to frustration and delays in the surgery.”

Researchers are creating a system that uses depth-sensing cameras and specialized algorithms to recognize hand gestures as commands to manipulate MRI images on a large display.

The researchers, whose findings are published in the Journal of the American Medical Informatics Association, validated the system, working with veterinary surgeons to collect a set of gestures natural for clinicians and surgeons.

The surgeons were asked to specify functions they perform with MRI images in typical surgeries and to suggest gestures for commands. Ten gestures were chosen: rotate clockwise and counterclockwise; browse left and right; up and down; increase and decrease brightness; and zoom in and out.

Critical to the system’s accuracy is the use of “contextual information” in the operating room—cameras observe the surgeon’s torso and head—to determine and continuously monitor what the surgeon wants to do.

“A major challenge is to endow computers with the ability to understand the context in which gestures are made and to discriminate between intended gestures versus unintended gestures,” Wachs says.

“Surgeons will make many gestures during the course of a surgery to communicate with other doctors and nurses. The main challenge is to create algorithms capable of understanding the difference between these gestures and those specifically intended as commands to browse the image-viewing system.

We can determine context by looking at the position of the torso and the orientation of the surgeon’s gaze. Based on the direction of the gaze and the torso position we can assess whether the surgeon wants to access medical images.”

The hand-gesture recognition system uses a camera developed by Microsoft, called Kinect, which senses three-dimensional space. The camera, found in consumer electronics games that can track a person’s hands, maps the surgeon’s body in 3D.

“If you are getting false alarms 20 percent of the time, that’s a big drawback,” Wachs says. “So we’ve been able to greatly improve accuracy in distinguishing commands from other gestures.”

The system also has been shown to have a mean accuracy of about 93 percent in translating gestures into specific commands, such as rotating and browsing images.

The algorithm takes into account what phase the surgery is in, which aids in determining the proper context for interpreting the gestures and reducing the browsing time.

“By observing the progress of the surgery we can tell what is the most likely image the surgeon will want to see next,” Wachs says.

The researchers also are exploring context using a mock brain biopsy needle that can be tracked in the brain.

“The needle’s location provides context, allowing the system to anticipate which images the surgeon will need to see next and reducing the number of gestures needed,” Wachs says. “So instead of taking five minutes to browse, the surgeon gets there faster.”

The Agency for Healthcare Research and Quality supported the research.