1. Great Blue Heron foot (Credit: TexasEagle/Flickr), 2. Tricolored heron (Credit: Isidro Vila Verde/Flickr), 3. How the landing track was probably made as a bird set down on the moist sand of a river bank (Credit: Tony Martin), 4. The bird tracks were found on a slab of sandstone. (Credit: Alan Tait) 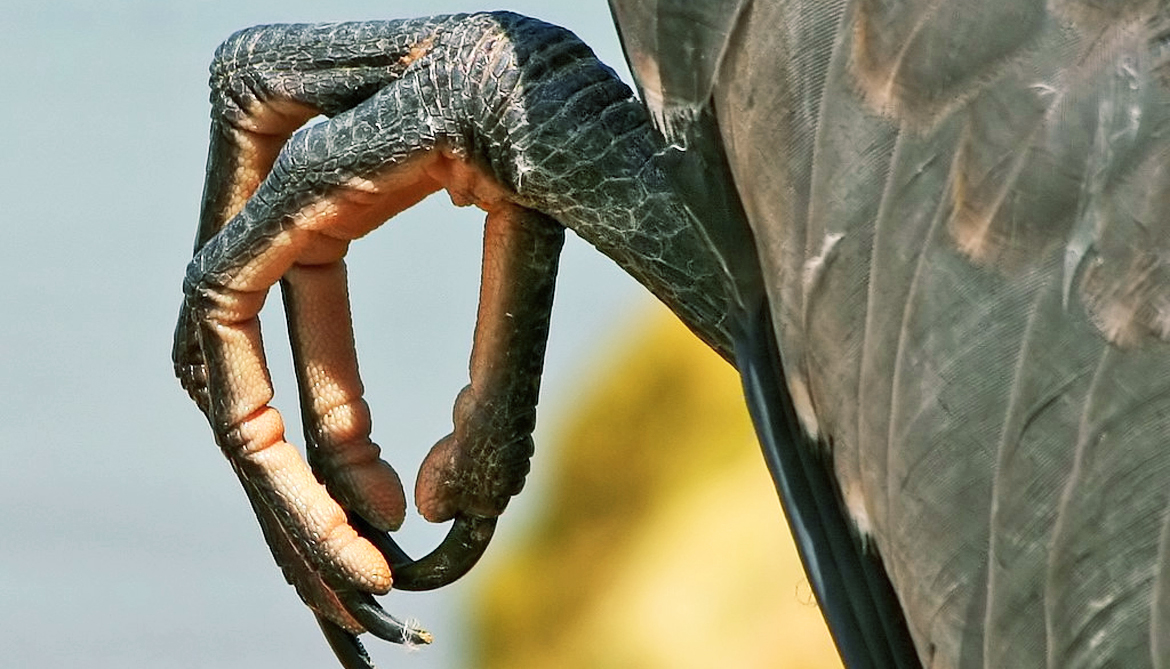 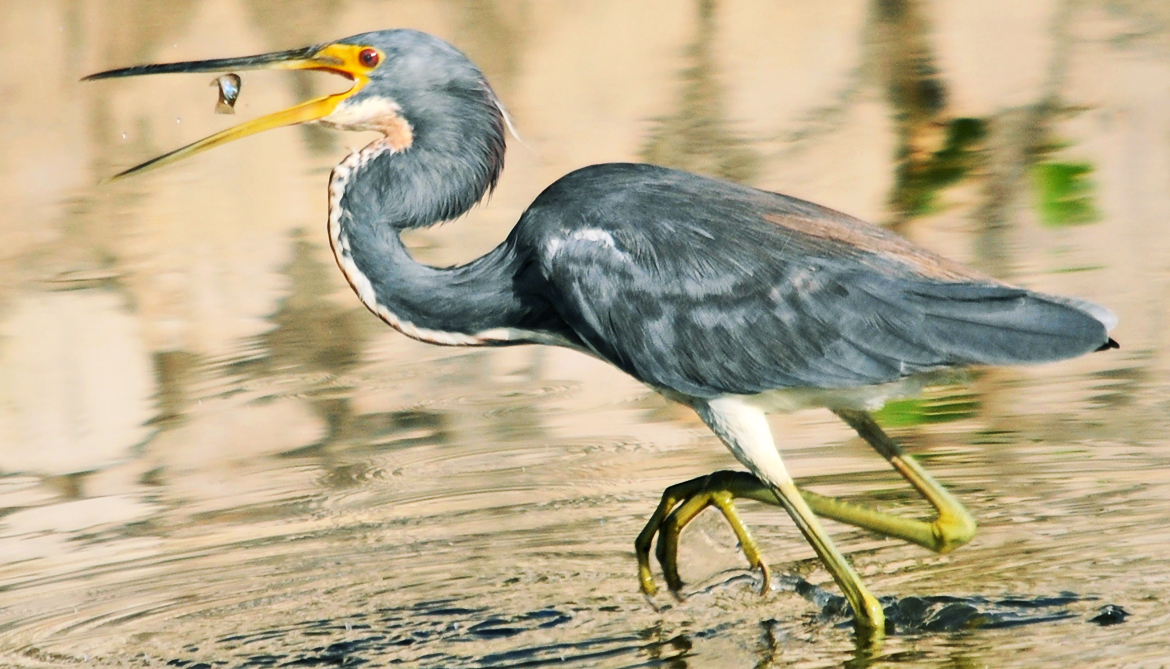 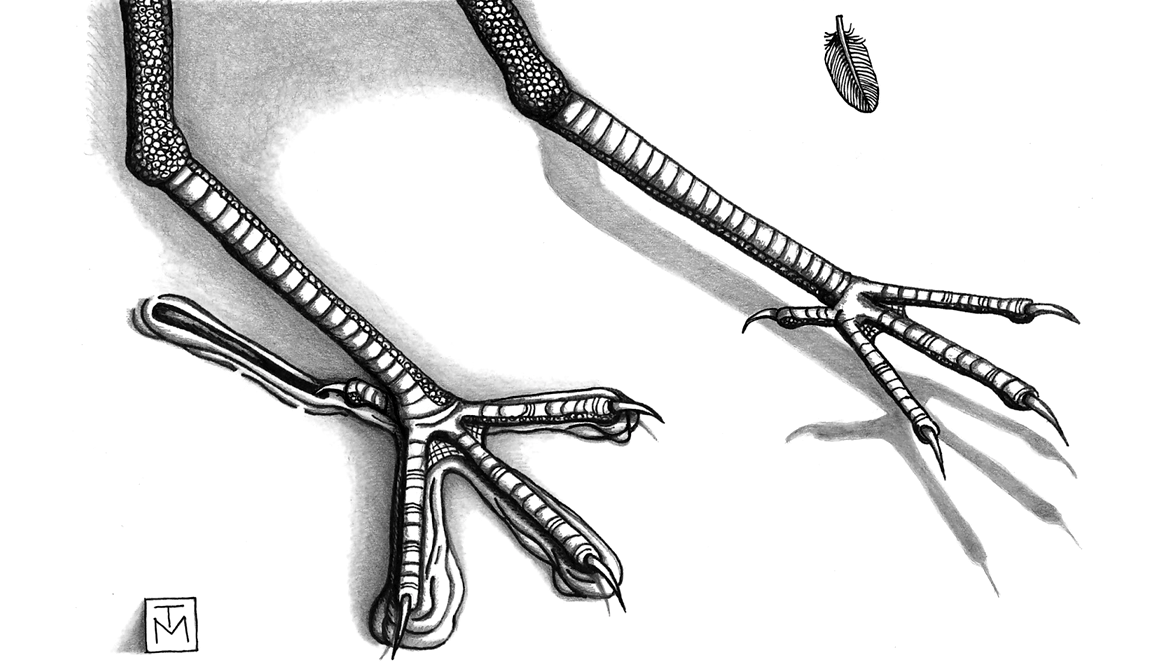 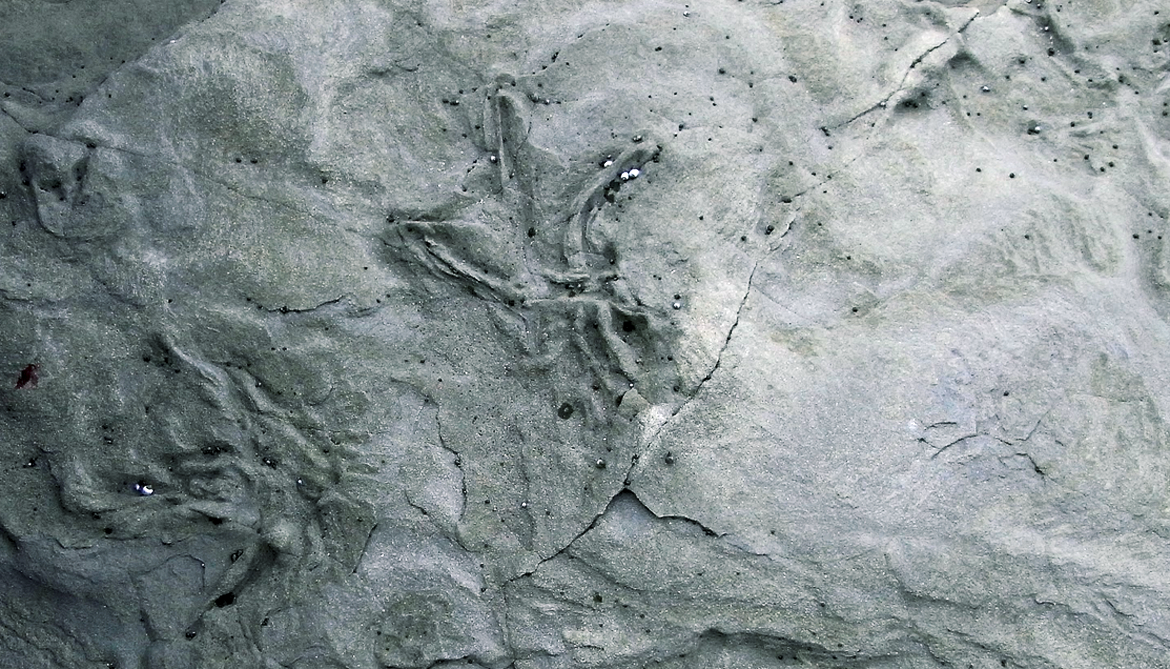 The two fossilized footprints, found at Dinosaur Cove in Victoria, are the oldest known bird tracks in Australia.

“These tracks are evidence that we had sizable, flying birds living alongside other kinds of dinosaurs on these polar, river floodplains, about 105 million years ago,” says Anthony Martin, a paleontologist at Emory University. He specializes in trace fossils, which include tracks, burrows, and nests.

The thin-toed tracks in fluvial sandstone were likely made by two individual birds that were about the size of a great egret or a small heron, Martin says. Rear-pointing toes helped distinguish the tracks as avian, as opposed to a third nearby fossil track that was discovered at the same time, made by a non-avian theropod.

Much of the rocky coastal strata of Dinosaur Cove in southern Victoria were formed in river valleys in a polar climate during the Early Cretaceous. A great rift valley formed as the ancient supercontinent Gondwana broke up and Australia separated from Antarctica.

A long drag mark on one of the two bird tracks particularly interested Martin.

“I immediately knew what it was—a flight landing track—because I’ve seen many similar tracks made by egrets and herons on the sandy beaches of Georgia,” Martin says.

The ancient landing track from Australia “has a beautiful skid mark from the back toe dragging in the sand, likely caused as the bird was flapping its wings and coming in for a soft landing,” Martin says. Fossils of landing tracks are rare, he adds, and could add to our understanding of the evolution of flight.

Today’s birds are actually modern-day dinosaurs, and share many characteristics with non-avian dinosaurs that went extinct, such as nesting and burrowing. Martin previously discovered the trace fossils of non-avian dinosaur burrows, including at a site along the coast of Victoria.

The theropod carnivore Tyrannosaurus rex had a vestigial rear toe, evidence that T. rex shared a common ancestor with birds. “In some dinosaur lineages, that rear toe got longer instead of shorter and made a great adaptation for perching up in trees,” Martin says.

“Tracks and other trace fossils offer clues to how non-avian dinosaurs and birds evolved and started occupying different ecological niches.”

Dinosaur Cove has yielded a rich trove of non-avian dinosaur bones from dozens of species, but only one skeletal piece of a bird—a fossilized wishbone—has been found in the Cretaceous rocks of Victoria.

Martin spotted the first known dinosaur trackway of Victoria in 2010 and a few other tracks have been discovered since then. Volunteers working in Dinosaur Cove found these latest tracks on a slab of rock, and Martin later analyzed them.

One of the best records of the dinosaur-bird connection has come from discoveries in Liaoning province of Northeastern China, including fossils of non-avian dinosaurs with feathers. Samples of amber have also been found in Liaoning, containing preserved feathers from both birds and non-avian dinosaurs going back to the Cretaceous.

“In contrast, the picture of early bird evolution in the Southern Hemisphere is mostly incomplete,” Martin says, “but with these tracks, it just got a little better.”

Co-authors of the study in Paleontology are Patricia Vickers-Rich and Michael Hall of Monash University in Victoria and Thomas Rich of the Museum Victoria in Melbourne.