NYU (US) — Robotic fish could reduce the number of live animals needed to study the effects of alcohol on behavior and the brain, scientists say.

A team of researchers introduced a robot designed to replicate the color pattern and tail beat motion of a fertile female zebrafish into shoals of live zebrafish. 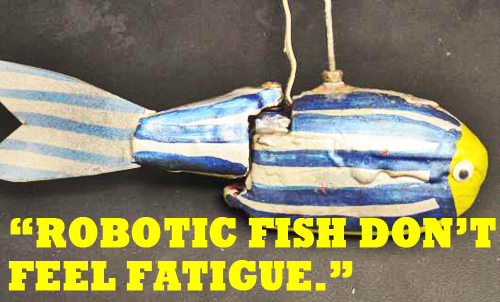 “The traditional stimulus in these experiments is another animal, but individual variations can affect the results,” says Maurizio Porfiri. “Robotic fish don’t feel fatigue. Their tail beat frequency never changes. Every time we introduce the stimulus, it’s identical, making the results much cleaner.” (Credit: Polytechnic Institute of New York University)

The species is highly social, and in prior experiments showed a consistently strong affinity for this robotic member. The goal was to test whether alcohol could affect this well-established preference.

Three groups of fish were treated with varying doses of ethanol in water—zero percent (control group), 0.25 percent, and 1 percent by volume. These doses represent acute administration and cause neither lasting effect nor harm to the fish.

The control group behaved as expected, showing a marked preference for the robotic member, assessed by the amount of time the fish spent in close proximity to the robot. The two ethanol-exposed groups deviated significantly from this pattern, spending more time in other regions of the tank.

This is the first study to demonstrate use of robotic stimuli to study reward-related behavior in zebrafish, and shows how the emerging field of ethorobotics—the interaction of biologically inspired robots with live animals—might change longstanding research models.

“One of the major advantages of robotics is that we can provide a fully controllable, consistent stimulus for the zebrafish,” says Maurizio Porfiri, associate professor of mechanical and aerospace engineering at the Polytechnic Institute of New York University (NYU-Poly). “The traditional stimulus in these experiments is another animal, but individual variations can affect the results.

Porfiri and colleagues describe the method and detail the results of the fish experiments in the current issue of the journal Alcohol.

“What we know right now is that robots can be a uniquely repetitive stimulus for those investigating the effects of alcohol on behavior,” Porfiri adds. “The innovation here is the method—we’ve taken one of the elements of experimentation that can vary, and standardized it.”

“This aspect holds promise to reduce the number of live animals used in preclinical research.”

Relatively little data exist to indicate how—or if—alcohol affects the cognitive abilities of zebrafish. The researchers believe that the change in behavior under the influence of alcohol may be attributed to impaired shoaling instincts or a shift in the incentive value of the robot from the fishes’ perspective.

In the next phase, the team plans to deploy a robotic predator to test the impact of alcohol on the zebrafishes’ sense of fear, as well as evaluating whether exposure impacts fishes’ willingness to make efforts to shoal with a robotic member.

The National Science Foundation and the Honors Center of Italian Universities supported the project.