A juvenile salamander of the species Thorius narisovalis on a blade of grass. (Credit: James Hanken) 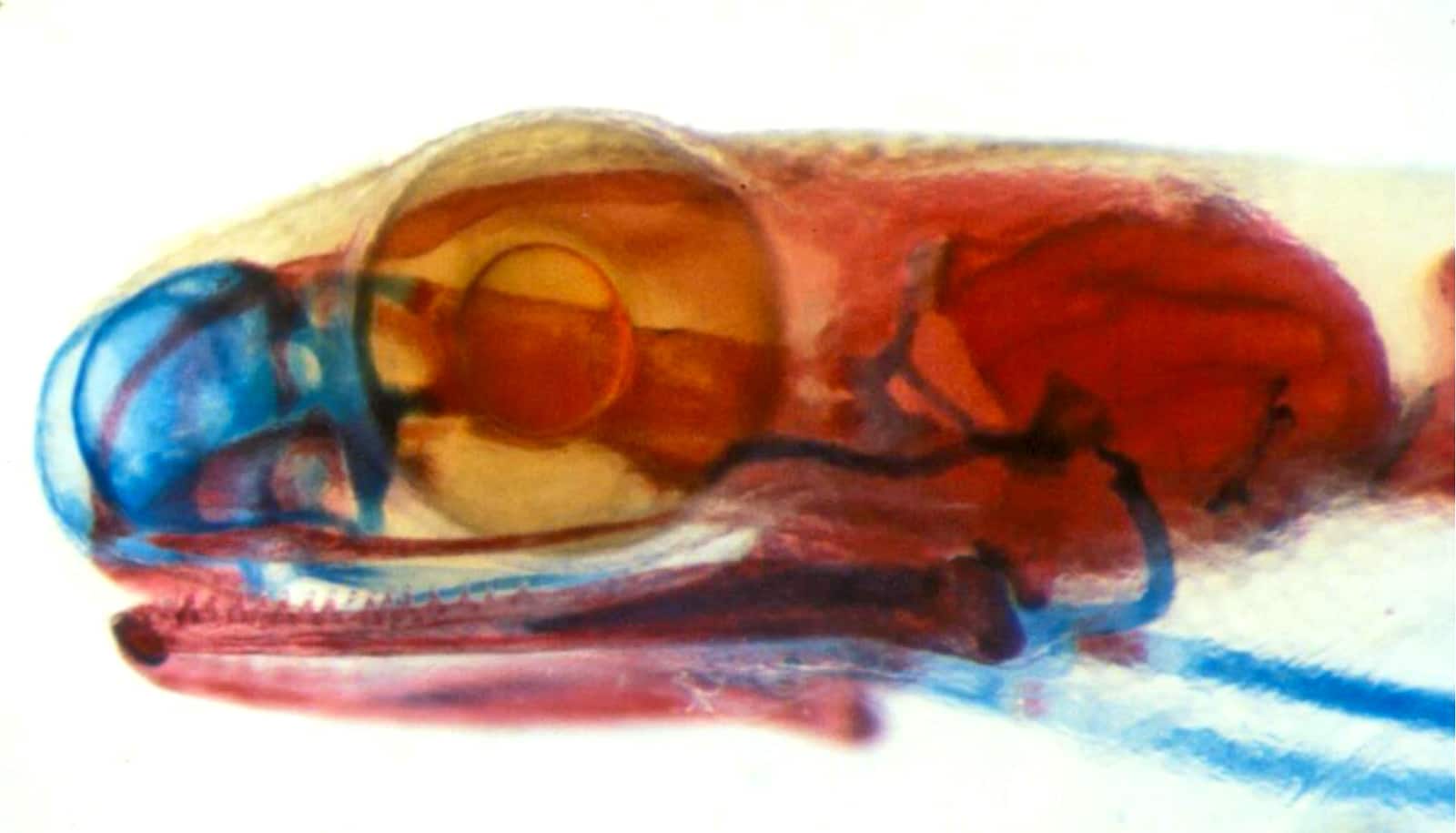 The head of a species of minute salamander (Thorius pennatulus). The bones are stained red and the cartilage blue, while all other soft tissues are transparent. The image shows the prominent eyes (yellow orb, with transparent lens visible inside) and tongue skeleton (red and blue rods at lower right) that are involved in feeding via tongue protrusion. The entire head is only 3 millimeters long. (Credit: James Hanken) 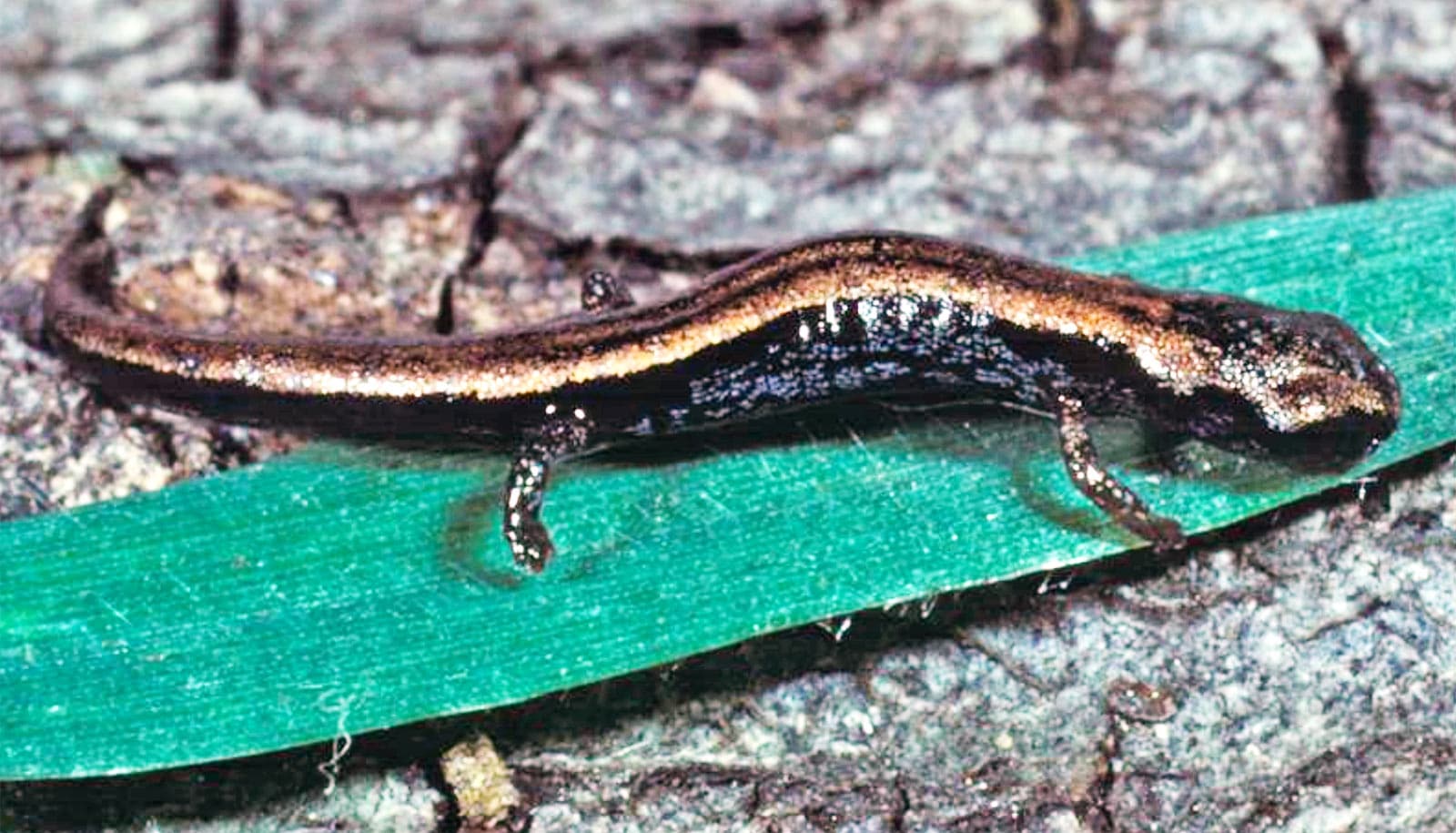 A juvenile salamander of the species Thorius narisovalis on a blade of grass. (Credit: James Hanken)
Previous Next

Researchers report three new species of the world’s smallest salamander from the remote mountains of Oaxaca, Mexico. They also warn that the rare creatures are already in danger of dying out.

The three new species are from the enigmatic genus Thorius, the adults of which are smaller than a matchstick. They are, in fact, the smallest four-legged tailed organism on Earth, and their miniaturized bodies are highly unusual for vertebrates, with structures for feeding being among the most prominent.

Although once extremely abundant, populations of Thorius have declined precipitously over the last 30 to 35 years, and living Thorius are now rarely found in nature. The findings underscore the large number of amphibian species that remain to be discovered and formally described, and the need to find and save them before they are lost.

“Salamanders of the highlands of Mexico are closer to extinction than any other on Earth,” says David Wake, one of the coauthors of a paper about the new species in the journal PeerJ. “The main factors are habitat conversion and new infectious diseases.”

Wake is a professor of the graduate school in the University of California, Berkeley’s department of integrative biology and a founder of AmphibiaWeb, an online compendium of information about amphibians and their conservation.

Thorius were first discovered in the 19th century, and for the next 75 years scientists believed there was only a single species. Nine additional species were discovered between 1940 and 1960, but the adults are so small that the species were hard to tell apart.

A breakthrough came in the 1970s, when biologists discovered that many species, while anatomically similar, could be readily told apart by using molecular techniques, which then revealed subtle anatomical features that differentiate them. Since then, many more species have been discovered and named and the three newly named species bring the current total to 29.

The current research began in the early 1970s and involved extensive fieldwork in southern Mexico over several decades in order to sample critical populations in remote areas. A combination of sophisticated molecular analyses, including DNA sequencing; digital imaging, such as X-ray computed tomography; and statistical analysis of external and internal anatomy uncovered new species.

“We have known about the salamanders we have described for decades, at a time when they were exceedingly common, but only recently have we obtained evidence that they are indeed new species, though now critically endangered,” Wake says. “This is a common experience with other high-altitude species in Mexico, and a biological disaster is facing us.”

Amphibians are in big trouble

For at least the last 30 years, the number of valid named amphibian species worldwide has increased at a rate of about 3 percent per year. Whereas in 1985 biologists thought there were around 4,000 species of amphibians, today they recognize more than 7,700. More new ones are being discovered almost daily.

Tragically, the discovery and documentation of hidden amphibian diversity coincides with the precipitous decline of amphibians globally. Many once-abundant species have gone extinct in the last 50 years, and others are likely doomed to a similar fate barring effective steps to save them.

Of the nearly 30 species of Thorius now recognized, almost all are regarded as endangered or critically endangered by the International Union for the Conservation of Nature. Indeed, the researchers say, Thorius may be the world’s most endangered genus of amphibians. There is a realistic chance that all living species could be extinct within the next 50 years.

Lead author is Gabriela Parra-Olea of the Institute of Biology at the Universidad Nacional Autónoma de México. Additional coauthors are from the National Laboratory of Genomics for Biodiversity in Irapuato, Mexico; Harvard University; the Museum of Natural Sciences in Spain; and the University of Texas at Austin.