U. WASHINGTON (US) — New research shows how some of the steepest mountain slopes in the world got that way.

The findings point to the interplay between terrain uplift associated with plate tectonics and powerful streams cutting into hillsides, leading to erosion in the form of large landslides.

The work, presented online May 27 in Nature Geoscience, shows that once the angle of a slope exceeds 30 degrees—whether from uplift, a rushing stream carving away the bottom of the slope, or a combination of the two—landslide erosion increases significantly until the hillside stabilizes.

“I think the formation of these landscapes could apply to any steep mountain terrain in the world,” says lead author Isaac Larsen, a University of Washington doctoral student in Earth and space sciences.

The study, co-authored by David Montgomery, a professor of Earth and space sciences and Larsen’s doctoral adviser, focuses on landslide erosion along rivers in the eastern Himalaya region of southern Asia. 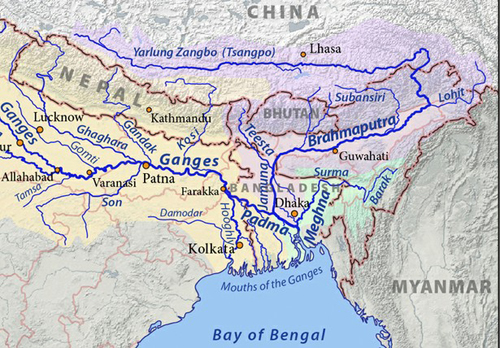 The researchers looked closely at an area of the 150-mile Tsangpo Gorge in southeast Tibet, possibly the deepest gorge in the world, downstream from the Yarlung Tsangpo River where the Po Tsangpo River plunges more than 6,500 feet, about 1.25 miles. (Credit: Pfly/Wikimedia Commons)

The scientists studied images of more than 15,000 landslides before 1974 and more than 550 more between 1974 and 2007. The data came from satellite imagery, including high-resolution spy satellite photography that was declassified in the 1990s.

They found that small increases in slope angle above about 30 degrees translated into large increases in landslide erosion as the stress of gravity exceeded the strength of the bedrock.

“Interestingly, 35 degrees is about the same angle that will form if sand or other coarse granular material is poured into a pile,” Larsen says. “Sand is non-cohesive, whereas intact bedrock can have high cohesion and should support steeper slopes.

“The implication is that bedrock in tectonically active mountains is so extensively fractured that in some ways it behaves like a sand pile. Removal of sand at the base of the pile will cause miniature landslides, just as erosion of material at the base of hill slopes in real mountain ranges will lead to landslides.”

The researchers looked closely at an area of the 150-mile Tsangpo Gorge in southeast Tibet, possibly the deepest gorge in the world, downstream from the Yarlung Tsangpo River where the Po Tsangpo River plunges more than 6,500 feet, about 1.25 miles.

It then becomes the Brahmaputra River before flowing through the Ganges River delta and into the Bay of Bengal.

The scientists found that within the steep gorge, the rapidly flowing water can scour soil from the bases, or toes, of slopes, leaving exposed bedrock and an increased slope angle that triggers landslides to stabilize the slopes.

From 1974 through 2007, erosion rates reached more than a half-inch per year along some 6-mile stretches of the river within the gorge, and throughout that active landslide region erosion ranged from 0.15 to 0.8 inch per year. Areas with less tectonic and landslide activity experienced erosion rates of less than 0.15 inch a year.

Images showed that a huge landslide in early 2000 created a gigantic dam on a stretch of the Po Tsangpo. The dam failed catastrophically in June of that year, and the ensuing flood caused a number of fatalities and much property damage downstream.

“We’ve been able to document the role that landslides play in the Tsangpo Gorge,” Larsen says. “It explains how steep mountain topography evolves over time.”

More news from the University of Washington: www.washington.edu/news/

Why mountains are such biodiversity hotspots

Sensors watch the Matterhorn for crumbling rock and cracking ice