A stone tool during the process of excavation at the Lomekwi 3 site in Kenya. (Credit: MPK-WTAP) 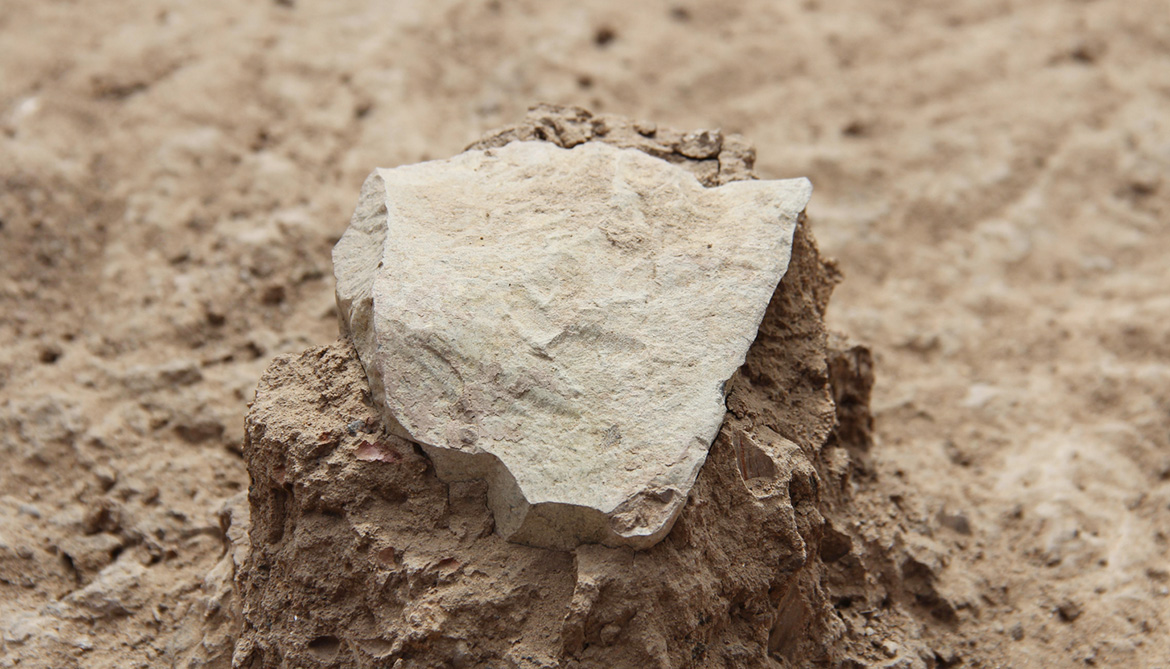 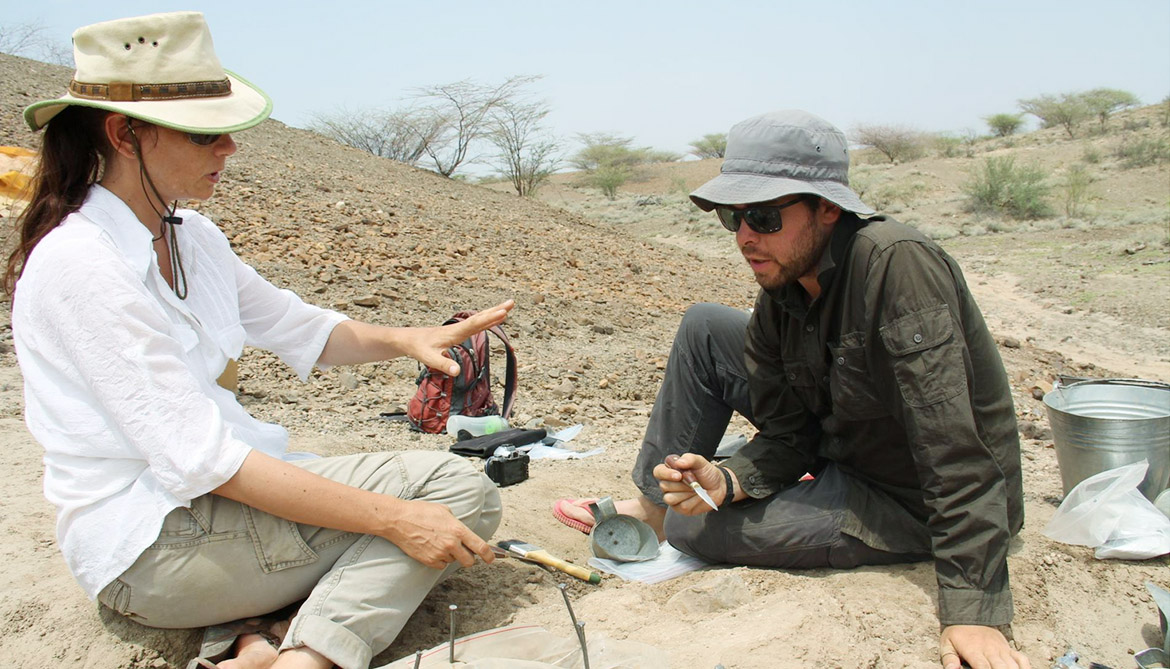 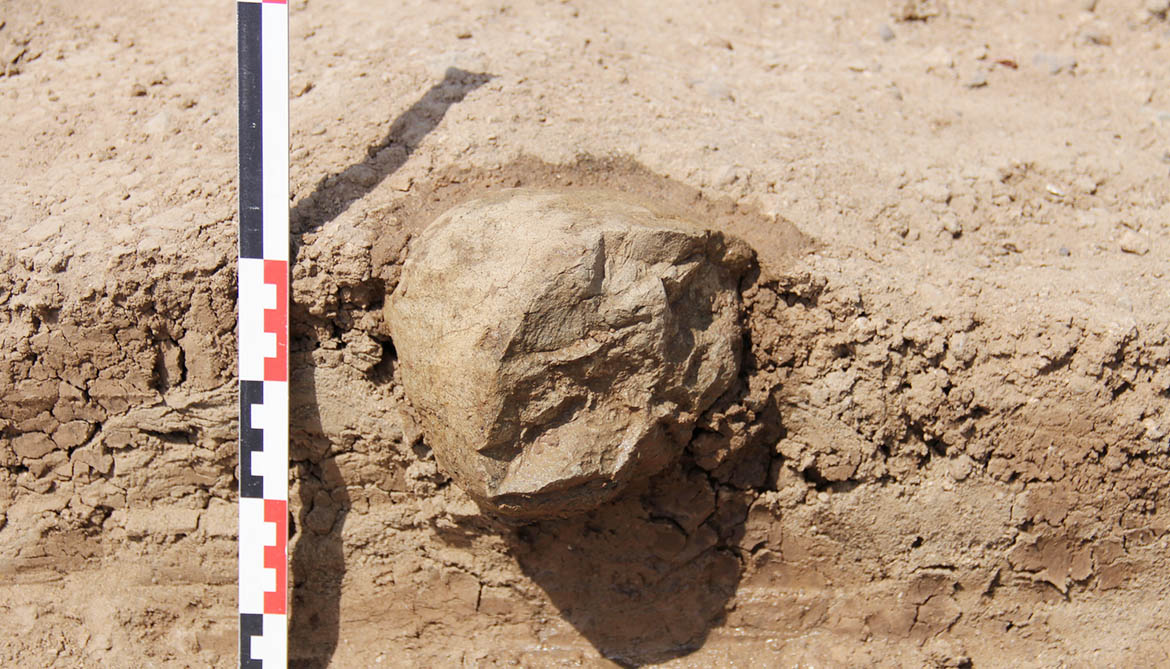 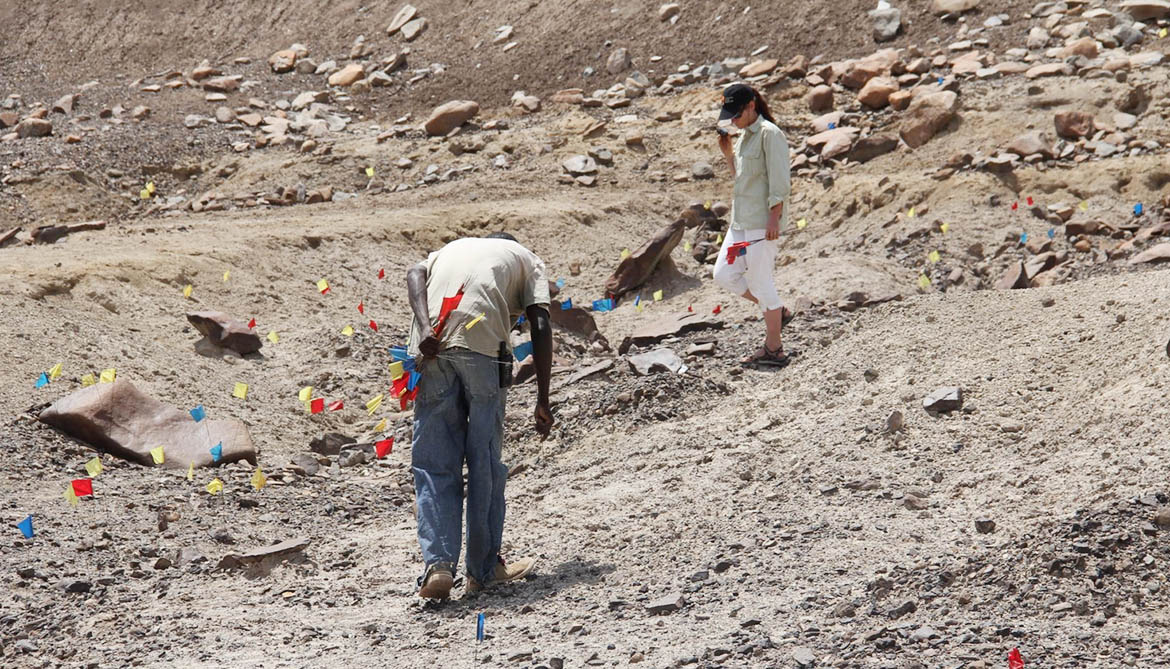 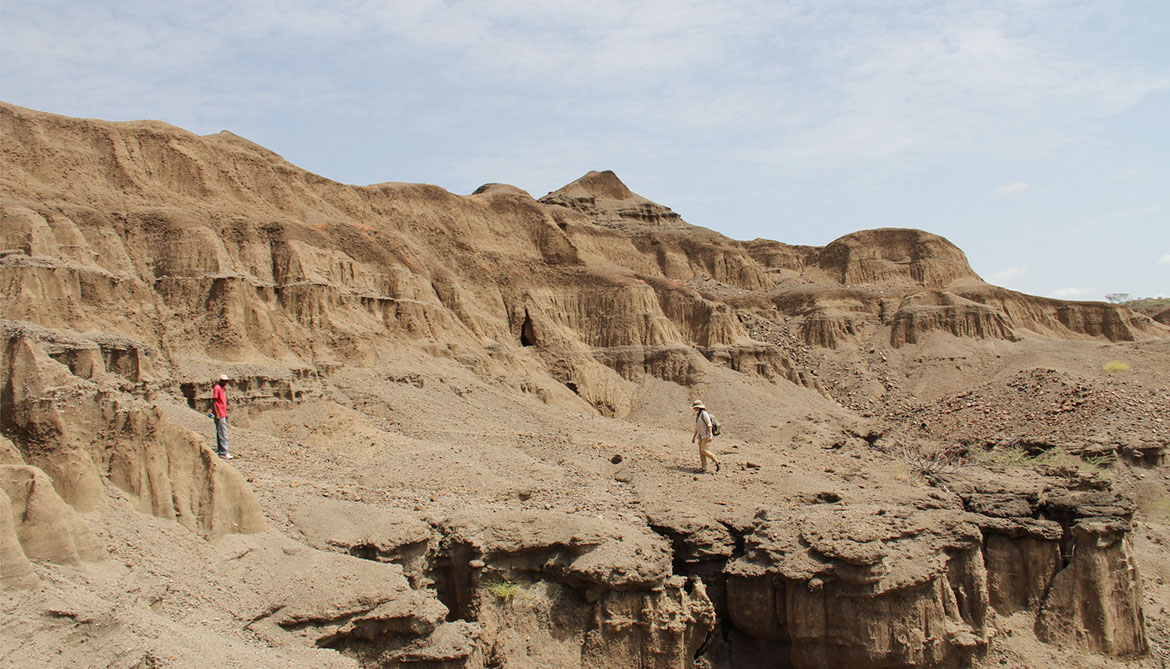 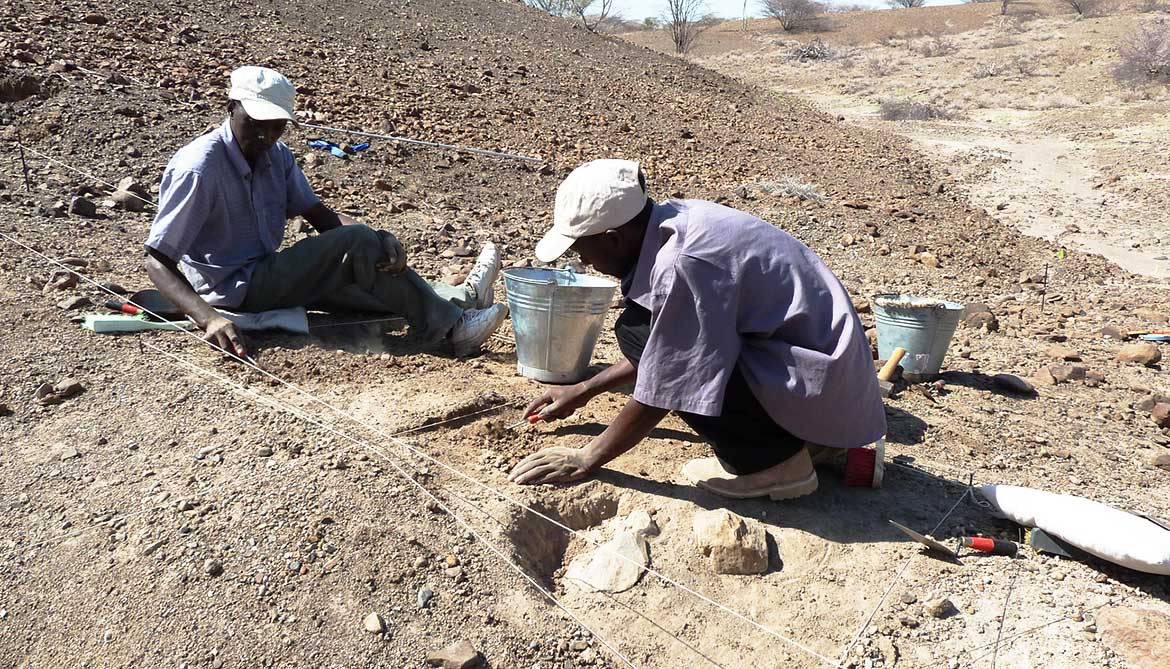 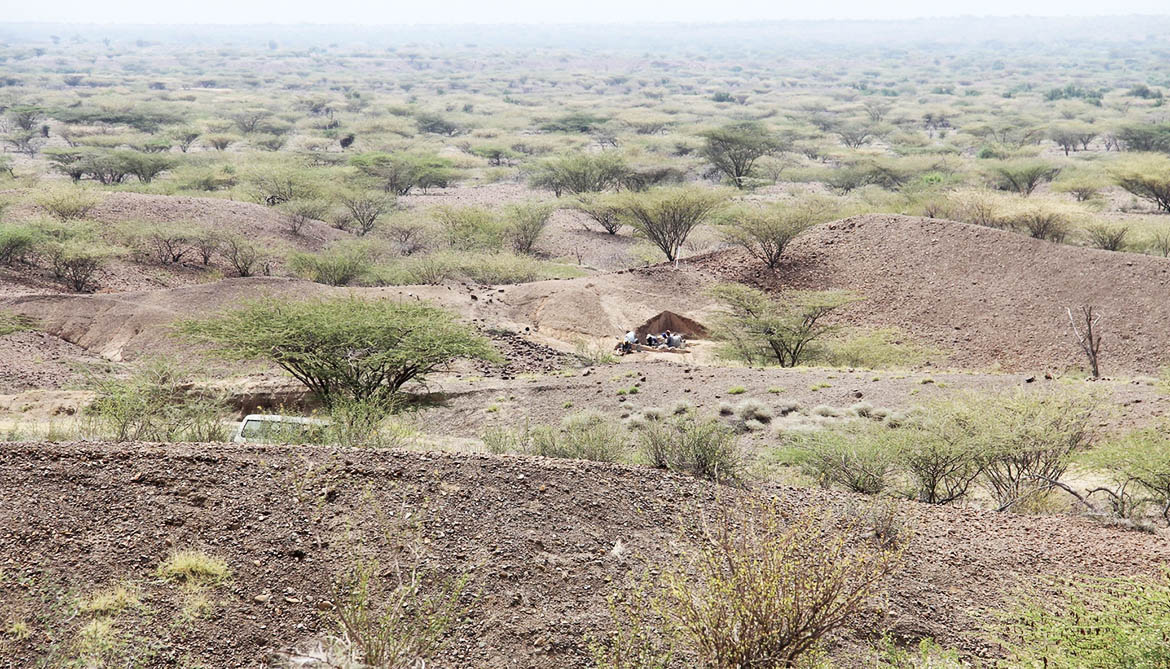 The discovery of the earliest stone artifacts ever found—dating to some 3.3 million years ago—suggests our ancestors were making stone tools about 700,000 years earlier than we originally thought.

Researchers found the tools at a site named Lomekwi 3 on the western shore of Lake Turkana in northern Kenya.

“These tools shed light on an unexpected and previously unknown period of hominin behavior, and can tell us a lot about cognitive development in our ancestors that we can’t understand from fossils alone,” says Sonia Harmand, research associate professor in the Turkana Basin Institute (TBI) at Stony Brook University. “Our finding disproves the long-standing assumption that Homo habilis was the first tool maker.”

The Lomekwi 3 artifacts show that at least one group of ancient hominin started intentionally “knapping”  stones—breaking off pieces with quick, hard strikes from another stone—to make sharp tools long before previously thought.

In the 1930s, paleoanthropologists Louis and Mary Leakey unearthed early stone artifacts at Olduvai Gorge in Tanzania and named them the Oldowan tool culture.  In the 1960s they found hominin fossils (in association with those Oldowan tools) that looked more like later humans—and assigned them to a new species, Homo habilis, handy man.

“Conventional wisdom in human evolutionary studies since has supposed that the origins of knapping stone tools was linked to the emergence of the genus Homo, and this technological development was tied to climate change and the spread of savannah grasslands,”  says Jason Lewis, research assistant professor at TBI. “The premise was that our lineage alone took the cognitive leap of hitting stones together to strike off sharp flakes, and that this was the foundation of our evolutionary success.”

But a series of papers published in early 2015 have solidified an emerging paradigm shift in paleoanthropology. Australopithecus africanus and other Pleistocene hominins, traditionally considered not to have made stone tools, have a human-like trabecular bone pattern in their hand bones consistent with stone tool knapping and use.

The researchers credit getting lost for the find.

One day in the field, they accidentally followed the wrong dry riverbed—the only way of navigating these remote desert badlands—and were scanning the landscape for a way back to the main channel. Local Turkana tribesman Sammy Lokorodi helped them spot the stone tools.

“The tools are much larger than later Oldowan tools, and we can see from the scars left on them when they were being made that the techniques used were more rudimentary, requiring holding the stone in two hands or resting the stone on an anvil when hitting it with a hammerstone,” Harmand says. “Some of the gestures involved are reminiscent of those used by chimpanzees when they use stones to break open nuts.”

Published in the journal Nature, the study of the Lomekwi 3 artifacts suggest they could represent a transitional technological stage—a missing link—between the pounding-oriented stone tool use of a more ancestral hominin and the flaking-oriented knapping of later, Oldowan toolmakers.

“The site at Lomekwi provides an ideal window into early hominin behavior across an ancient landscape.  The exposures of sedimentary strata there allow us to place these activities in a detailed environmental context, and to tightly constrain their age” says geologist Craig Feibel of Rutgers University, a coauthor of the study.

The scientists dated the hominin remains by correlating the rock strata where they were discovered with well-known radiometrically dated tuffs (volcanic ash). The tools were studied by Harmand and her colleague Hélène Roche to interpret physical features and reconstruct the manufacturing techniques used at the prehistoric site, including experimental replication of the tools.

“I have no doubt that these aren’t the very first tools that hominins made,” Harmand says. “They show that the knappers already had an understanding of how stones can be intentionally broken, beyond what the first hominin who accidentally hit two stones together and produced a sharp flake would have had. I think there are older, even more primitive artifacts out there.”

Why red squirrel moms gamble on the trees

Check out flowers up close with these 3D models