"By extending the internet to physical objects—what's being called the Internet of Things (IoT)—we are creating new ways for people to interact with the world around them," says Jessica Hodgins. "EM-Sense can make the IoT experience even richer by enabling people to get information or additional functionality simply by touching everyday objects." (Credit: Carnegie Mellon University) 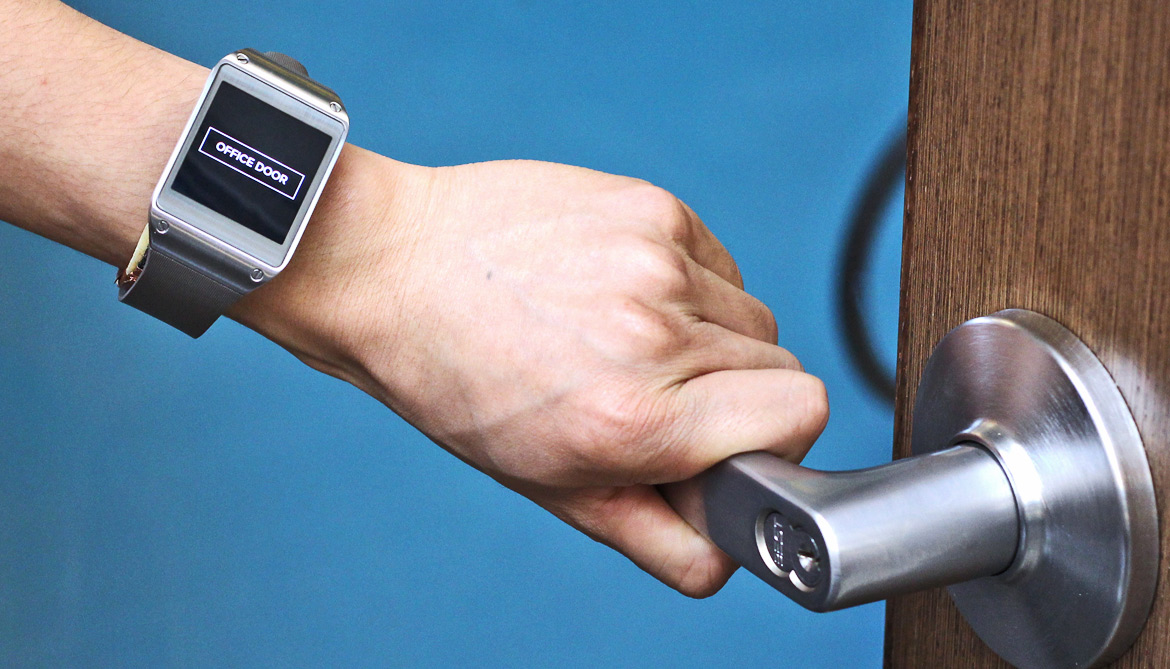 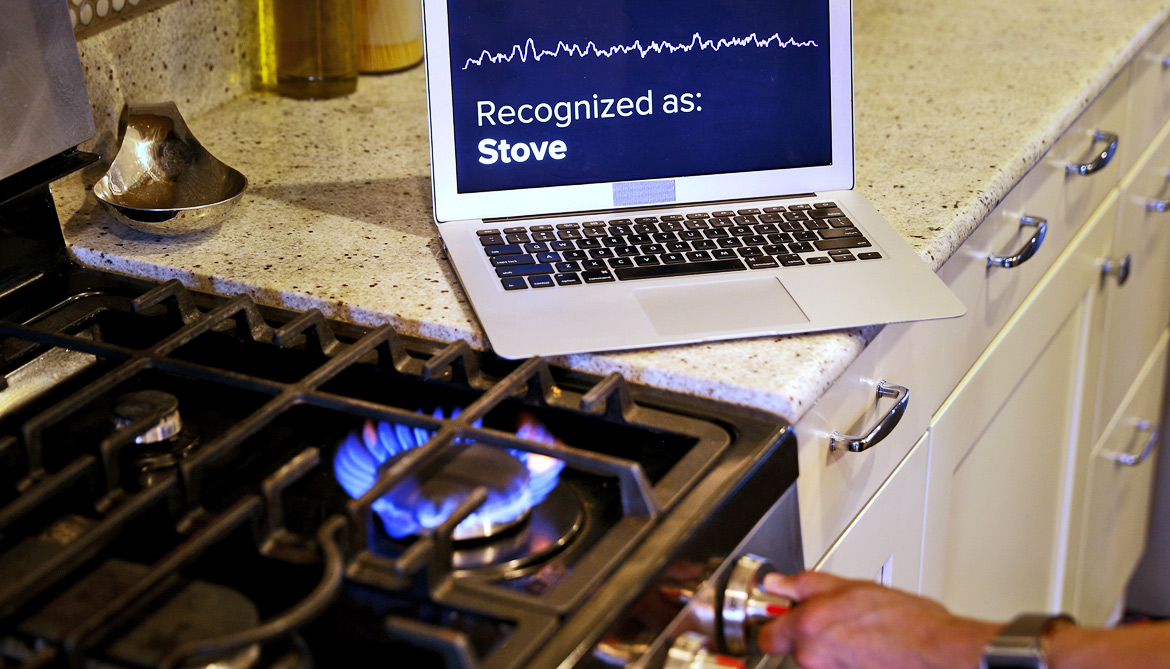 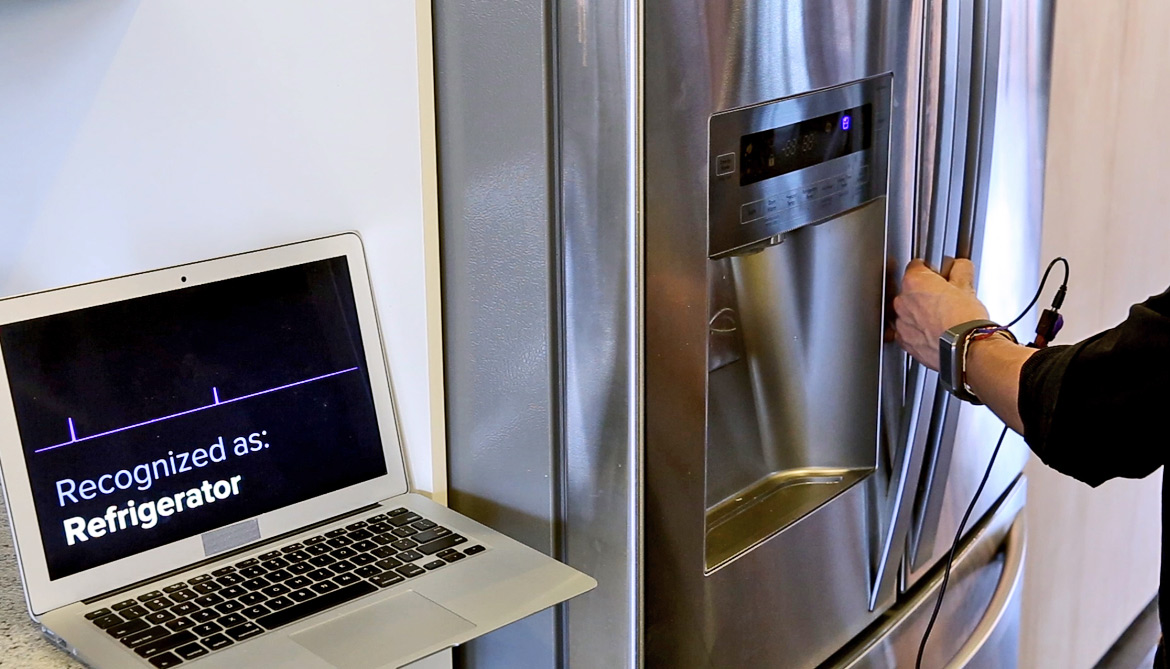 With a new technology, your smartwatch could automatically recognize what object you’re touching—such as using a laptop, operating a saw, or riding a motorcycle.

This capability could create new opportunities for context-aware apps.

The technique, called EM-Sense, takes advantage of the body’s natural electrical conductivity to detect whether a person is touching an electrical or electromechanical device and, based on the distinctive electromagnetic noise emitted by such devices, automatically identify the object.

“This could be a great feature for smartwatches, making them much smarter than before,” says Gierad Laput, a PhD student in Carnegie Mellon University’s Human-Computer Interaction Institute (HCII).

A smartwatch equipped with EM-Sense would have a much more detailed understanding of what the user is doing than is possible with common mobile sensors, such as accelerometers or pulse monitors, he adds.

The smartwatch therefore could automatically start a timer when the wearer begins using an electric toothbrush, unlock a keyboard without a password when users touch their laptops, or play the latest news when breakfast is being prepared. Linking a smartwatch with a smartphone or other mobile device would expand the possibilities even further.

“We are now able to gain a greater contextual understanding of user activities by recognizing what objects they are interacting with,” says Alanson Sample, a research scientist at Disney Research. EM-Sense is able to differentiate between scores of objects based on the ambient electromagnetic noise they emit, so objects need not be modified or have RFID tags for the technique to work.

The researchers will discuss EM-Sense at UIST 2015, the ACM Symposium on User Interface Software and Technology, November 8-11, in Charlotte, North Carolina.

“By extending the internet to physical objects—what’s being called the Internet of Things (IoT)—we are creating new ways for people to interact with the world around them,” says Jessica Hodgins, vice president of Disney Research. “EM-Sense can make the IoT experience even richer by enabling people to get information or additional functionality simply by touching everyday objects.”

The human body serves as an antenna for EM-Sense. From any body part an object touches, its distinctive electromagnetic emissions propagate through the body to an electrode worn at the wrist. Kitchen appliances, power tools, electronic scales, and door handles with electrically triggered locks are among the items that can be detected and identified. It’s even possible to differentiate between different models of cellphones.

[How boron could improve wearable tech]

Laput says the proof-of-concept sensor was built with off-the-shelf components—principally a small, software-defined radio. A smartwatch would provide the perfect platform, he adds, because the watch is in contact with the skin and also houses a highly capable computer for deciphering signals and running apps.

The researchers are able to filter out background noise, so the technique is able to recognize powered devices at any location. The technique also can work with large, non-powered conductive objects, such as doors, ladders, and other structural elements.

Recreational runners prefer to run at an energy-saving pace

Why do hugs feel good? This chemical messenger