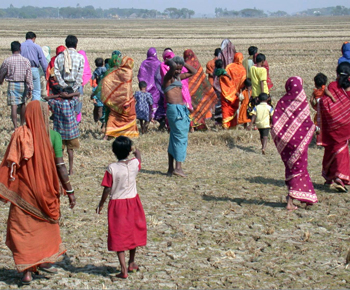 Shaming, such as the “walk of shame” seen above, is a strategy first tried in Bangladesh in an effort to appeal to emotions during group gatherings of local residents. (Credit: Jyoti Prakash)

DUKE (US)—Government subsidies persuade some people to change habits, but social shame works even better, suggests a recent study of efforts to reduce elevated childhood death and disease rates in rural India blamed on the microbial pathogens that cause diarrhea.

“All this started with public health workers there just beating their heads against the reality of how sticky human behavior is and how hard it is to change it,” says Subhrendu Pattanayak, an associate professor at Duke University’s Sanford School of Public Policy and Nicholas School of the Environment.

According to a report in the Bulletin of the World Health Organization, of which Pattanayak was lead author, experts have disagreed “whether improved access to sanitation and other health technologies is better achieved through monetary subsidies or shaming techniques.”

Shaming, a strategy first tried in Bangladesh, is an appeal to the emotions during group gatherings of local residents to access the impacts of unhygienic practices, Pattanayak says. Neighbors caught in open defecation, for example, may be taunted.

Pattanayak’s evaluation focused on efforts to combine both shaming and reward tactics in the state of Orissa, which has a child mortality rate higher than average for India.

Health workers participating in a Total Sanitation Campaign had previously knocked on doors throughout India, handing out pamphlets designed to persuade individual households to install pit latrines. The poorer households were even offered construction subsidies that would reduce their costs to the U.S. equivalent of $7.50.

But after those initial efforts, follow-up studies found less than a quarter of the nation’s population and less than 10 percent of residents of Orissa had “access to safe water and good sanitation,” according to the report.

So Pattanayak worked with frustrated government officials and his collaborators at RTI International in Research Triangle Park, N.C., where he then worked. Collectively they designed a study, funded by the World Bank, to measure the effectiveness of what his report calls “a social mobilization strategy.”

Twenty Orissa villages were selected at random in 2006 for locally led efforts that included village “walks of shame” and “defecation mapping” that identified sources of contamination and their distances from drinking water supplies. As that study began, about 30 percent of the interviewed households reported a child younger than 5 years had experienced diarrhea within the previous two weeks.

Community based groups were empowered “to establish systems of fines, taunting, or social sanctions to punish those who continued to defecate in the open,” the report says.

As Total Sanitation Campaign workers organized these additional efforts,  Pattanayak’s study group remained behind the scenes gathering data through “before and after” health and sanitation surveys.

The results were striking when surveys from those 20 villages were compared with 20 other randomly selected communities where no social mobilization efforts were organized.

Although subsidies for latrine construction were available to residents below India’s poverty line in all 40 villages, latrine ownership only rose in those undergoing shaming, according to the surveys.

Within those “shamed” communities, latrine ownership rose from 5 percent to 36 percent among families below the poverty line, and from 7 percent to 26 percent among households above it. Subsequent surveys by Orissa’s state government showed that all households had installed latrines by 2007 in 10 of the 20 villages subjected to the shaming.

Statistical analysis suggests that subsidies were responsible for about one third of the improvements in those communities and shame for about two thirds, the report concludes.

Pattanayak, himself a native Indian whose general academic interest is environmental and development economics, thinks his countrymen generally understand how bad hygiene can relate to childhood disease. But they also feel a combination of fatalism and powerlessness.

“Many view the loss of a child every now and then to diarrhea and other stomach ailments as part of normal life,” he says. “While some people recognize the connection and do something about it, the rest also recognize it but find it too abstract compared to life’s other problems.

“This is a typical story of why people don’t do things that seem beneficial to others,” he says. “You feel you are just a small part of the picture: ‘If I do this there’s some chance that things will improve.’ But that is conditional on how many others also do something about it.”