YALE (US) — Salmonella becomes dangerously virulent only when molecular sensors within the organism sense changes in the environment.

The findings, reported in the journal Nature by researchers from Yale University, suggest other dangerous pathogens probably possess analogous sensors to activate virulence genes and cause maladies such as food poisoning and tuberculosis.

This mechanism may present a novel target for drugs that can disarm bacteria’s ability to cause disease, says Eduardo A. Groisman, professor of microbial pathogenesis at the Yale School of Medicine and an investigator with the Howard Hughes Medical Institute. 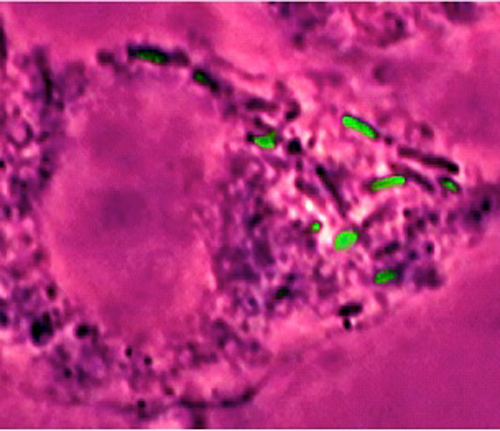 “There will never be a world without Salmonella because it exists in many, many animal reservoirs,” Groisman says. “So you can try to avoid getting Salmonella or learn how to fight it. Hundreds of thousands of people die from Salmonella poisoning each year, and tens of millions of people are infected. It is a major public health issue.”

Groisman and Eun-Jin Lee of Yale investigated whether signals from outside the bacteria triggered one of its virulence genes. The researchers meticulously tracked the molecular chain reaction that occurs after Salmonella becomes engulfed by macrophages, immune system cells that respond to bacterial invaders.

Salmonella then can reproduce rapidly, often overwhelming defenses of the host.

The Nature paper discovers that it is not the direct threat from the environment itself that triggers the virulence gene within the bacterium. Instead, changes in the level of acidity in Salmonella’s surroundings trigger an increase in levels of ATP, the energy currency of all cells.

It is the change in ATP levels within the organism that activates virulence factors and enables Salmonella to survive within its host. This internal sensor acts in concert with several other factors necessary before these bacteria can become virulent, Groisman says.

Understanding all these processes should help scientists develop defenses against infectious diseases, he adds.

C. difficile may cause colorectal cancer