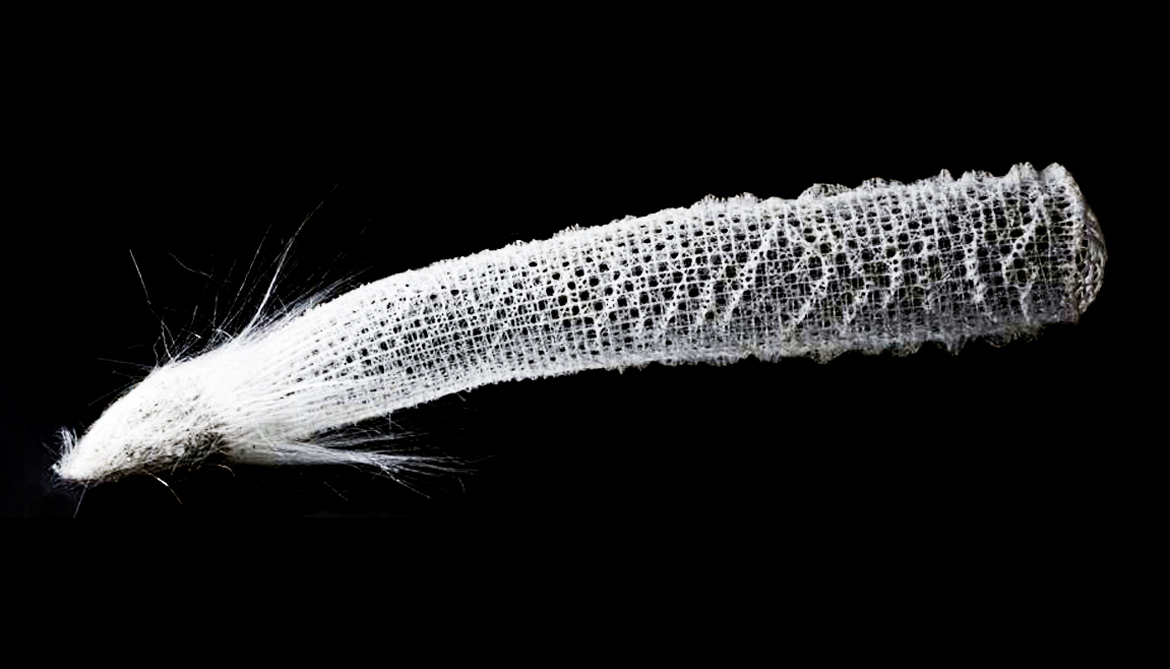 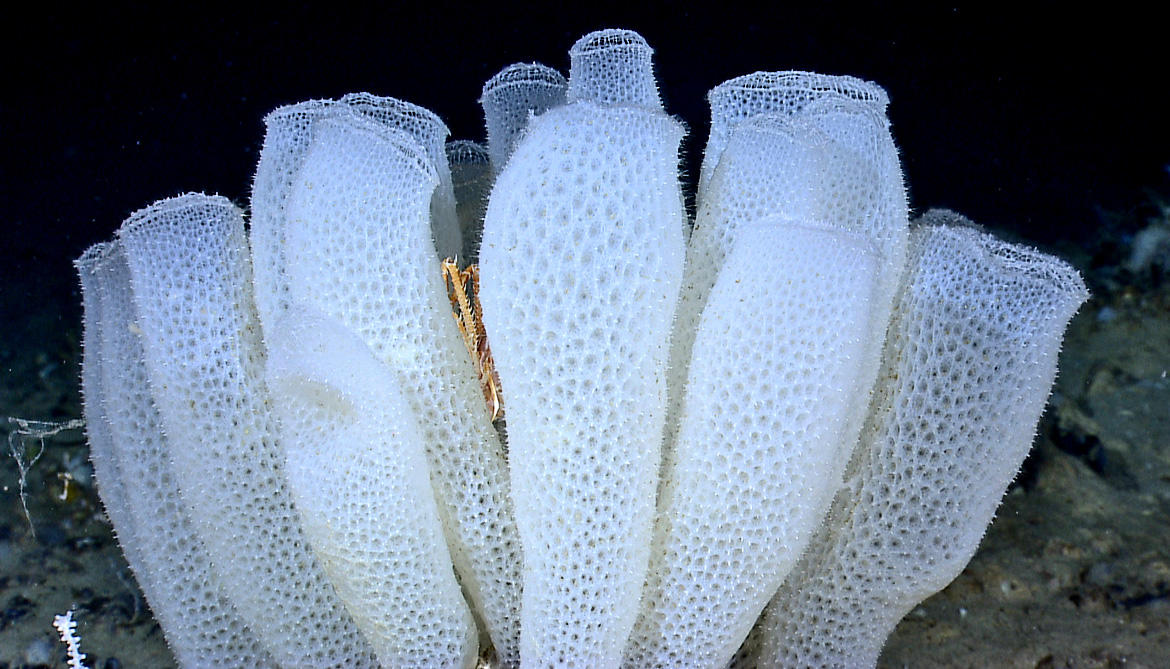 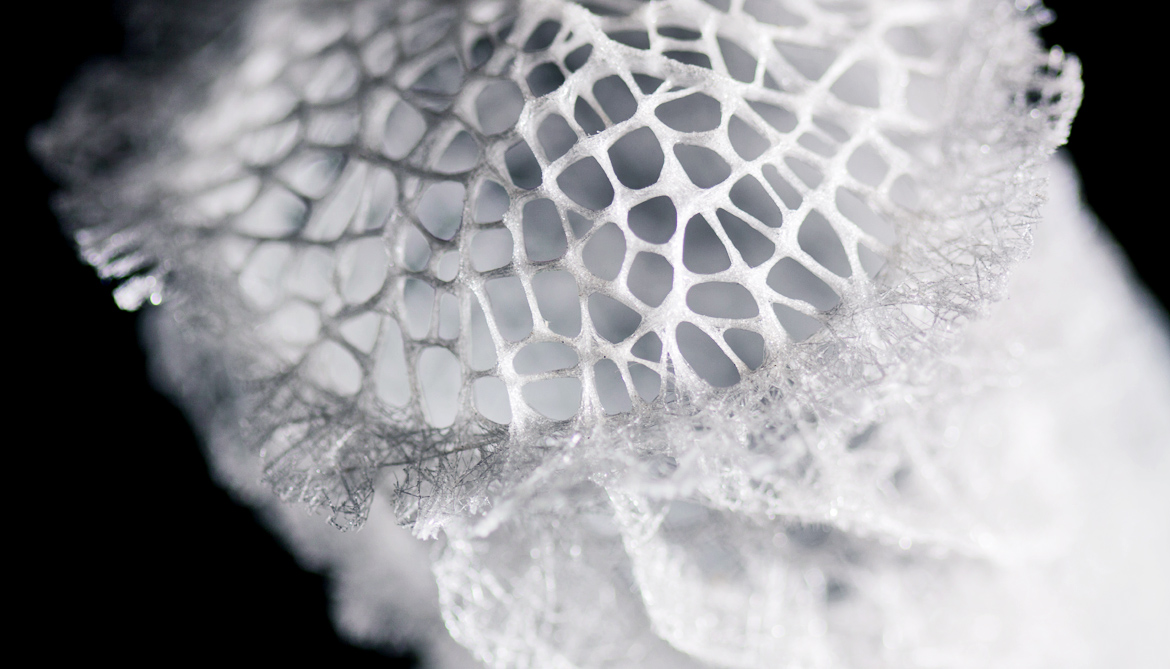 Hair-like appendages are all that hold the Venus’ flower basket sea sponge to its seafloor home. But the interiors of those tiny lifelines, made essentially of glass, are fine-tuned for strength.

The findings could eventually help engineers build load-bearing structures made stronger from the inside out, researchers say.

The secret to those tiny lifelines, called basalia spicules, lies in their internal structure. The spicules, each only 50 microns in diameter, are made of a silica (glass) core surrounded by 10 to 50 concentric cylinders of glass, each separated by an ultra-thin layer of an organic material. The walls of each cylinder gradually decrease in thickness moving from the core toward the outside edge of the spicule.

Stuck to the seafloor

When researchers first saw this structure, they weren’t sure what to make of it. But the pattern of decreasing thickness caught their attention.

“It was not at all clear to me what this pattern was for, but it looked like a figure from a math book,” says Haneesh Kesari, assistant professor of engineering at Brown University. “It had such mathematical regularity to it that I thought it had to be for something useful and important to the animal.”

The lives of these sponges depend on their ability to stay fixed to the sea floor. They sustain themselves by filtering nutrients out of the water, which they can’t do if they’re being cast about with the flow. So it would make sense that natural selection may have molded the creatures’ spicule anchors into models of strength—and the thickness pattern could be a contributing factor.

“If it can’t anchor, it can’t survive,” Kesari says. “So we thought this internal structure must be contributing to these spicules being a better anchor.”

To find out, Kesari worked with graduate student Michael Monn to build a mathematical model of the spicules’ structure. Among the model’s assumptions was that the organic layers between the glass cylinders allowed the cylinders to slide against each other.

“We prepared a mechanical model of this system and asked the question: Of all possible ways the thicknesses of the layers can vary, how should they vary so that the spicule’s anchoring ability is maximized?” Kesari says.

The model predicted that the structure’s load capacity would be greatest when the layers decrease in thickness toward the outside, just as was initially observed in actual spicules.

Kesari and Monn then worked with James Weaver and Joanna Aizenberg of Harvard University’s Wyss Institute for Biologically Inspired Engineering, who have worked with this sponge species for years. The team carefully compared the layer thicknesses predicted by the mechanics model to the actual layer thicknesses in more than a hundred spicule samples from sponges.

The findings, published in the Proceedings of the National Academy of Sciences, show the predictions made by the model matched very closely with the observed layer thicknesses in the samples. “It appears that the arrangement and thicknesses of these layers does indeed contribute to the spicules’ strength, which helps make them better anchors,” Kesari says.

The scientists say this is the first time to their knowledge that anyone has evaluated the mechanical advantage of this particular arrangement of layers. It could add to the list of useful engineered structures inspired by nature.

“In the engineered world, you see all kinds of instances where the external geometry of a structure is modified to enhance its specific strength—I-beams are one example,” Monn says. “But you don’t see a huge effort focused toward the internal mechanical design of these structures.”

This study, however, suggests that sponge spicules could provide a blueprint for load-bearing beams made stronger from the inside out.

The National Science Foundation and the KIMM–Brown Nano and Micromechanics for Disaster Mitigation and Technological Reliability project supported the work.

Swift action could save corals from warming oceans