U. LEEDS (UK) — Colonies of northern gannets, which fly far out to sea to feed, are reshaping our understanding of how animals forage.

Gannets colonies maintain vast exclusive fishing ranges, yet they do nothing to enforce territory or communicate boundaries.

“The accepted view is that exclusive foraging territories are associated with species such as ants, which aggressively defend the feeding areas around their colonies, but this opens the door to a completely new way of thinking about territory,” says Ewan Wakefield, postdoctoral researcher in the University of Leeds’ faculty of biological sciences. 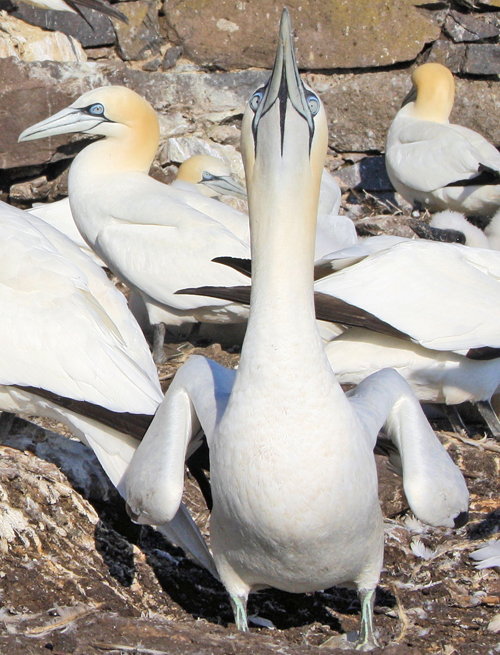 Gannets avoid visiting the fishing grounds of gannets from neighboring colonies. The explanation has nothing to do with territorial behavior, researchers say, but instead seems to be a matter of mathematics reinforced by the culture of colonies. (Credit: University of Leeds)

“We found the gannet colonies also had neatly abutting and clearly defined feeding areas. Gannets may be a byword for gluttony but, clearly, they don’t eat off each other’s plates.”

For the study, published in the journal Science, researchers tracked the flights of nearly 200 northern gannets flying from 12 colonies around the British Isles.

Rather than seeing criss-crossing flight paths as the birds headed out from their colonies, they found themselves plotting a strictly segregated map. The most striking example was seen off the west coast of Ireland where gannets from two colonies, Bull Rock and Little Skellig, are within sight of each other yet head off in different directions.

The explanation has nothing to do with territorial behavior, researchers say, but instead seems to be a matter of mathematics reinforced by the culture of colonies.

“Gannets get their chance when shoals of fish are forced to the surface, often by predatory whales and dolphins, but when the gannets start plunging into the water and feeding on a shoal, the fish start diving,” says Thomas Bodey, postdoctoral researcher at the University of Exeter.

“You have to be one of the first gannets to get there and that is where the maths comes in: if you go into an area that is being used by birds from a closer colony, there is a higher chance that individuals from that colony will be there first.”

The same applies when waste is being thrown off the backs off trawlers, another key feeding opportunity for gannets. Cultural transmission within the colonies then seems to reinforce the geographical calculus.

“Gannets readily follow each other when at sea. Finding such separation between colonies, even when visible from each other, indicates that competition for food cannot be the only explanation and suggests cultural differences between colonies may be important,” Bodey says.

“As with humans, birds have favored routes to travel, and if new arrivals at a colony follow experienced old hands then these patterns can quickly become fixed, even if other opportunities potentially exist.”

The northern gannet is Europe’s largest seabird, with a wingspan of around 2 meters, and nests on steep cliffs and rocky islands. The UK supports between 60 to 70 percent of the world’s northern gannets. 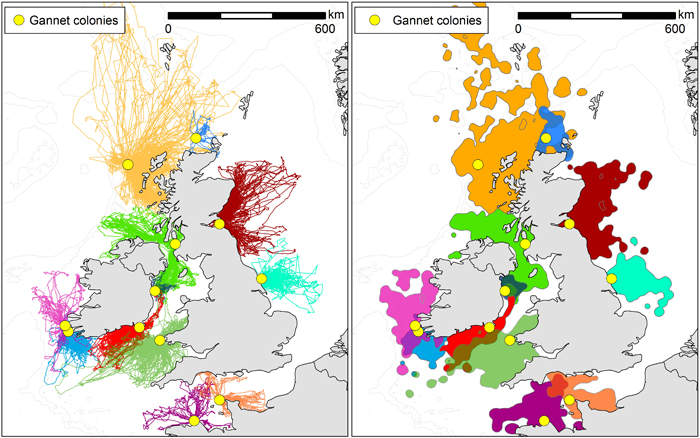 Researchers tracked the flights of nearly 200 northern gannets flying from 12 colonies around the British Isles. (Credit: University of Leeds)

The discovery that colonies depend on particular sea areas has implications for the location of marine protected areas and offshore energy development.

“We knew that species like ants that forage over short distances show segregation, but now we find that segregation not only occurs in gannets but that it is there just as strongly as in ants,” says co-author Keith Hamer, reader in animal ecology.

“That immediately opens the door to asking how many other species that we assumed would not show segregation actually do. There is no reason to believe that gannets are unique.”

The work was funded by the Natural Environmental Research Council, the Department of Energy & Climate Change, the Centre for Ecology & Hydrology, the Centre National de la RechercheScientifique, the Ligue pour la Protection des Oiseaux, the Alderney Commission for Renewable Energy, the Beaufort Marine Research Award and the European Union.

Researchers from the Universities Plymouth, Liverpool, Trinity College Dublin and University College Cork, the Royal Society for the Protection of Birds, Centre for Ecology & Hydrology and the Centre National de la RechercheScientifique, France contributed to the study.