EMORY (US) — Researchers use MRI scans to explore the brain activity of alert dogs, and reveal how the minds of the oldest domesticated species respond to their owners’ hand signals.

Many dog lovers speculate about how their pets feel about them, but no one has captured images of actual canine thought processes, until now. 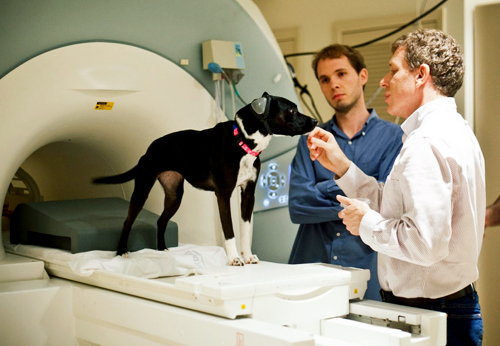 Neuroeconomist Gregory Berns adopted Callie, a two-year-old Feist, from a shelter at nine months and trained her to lie still in the scanner and wear ear protection. (Credit: Bryan Meltz)

The results of Emory University researchers’ first experiment, which will be published in PLoS ONE, show how the brains of dogs reacted to hand signals given by their owners.

The researchers used harmless functional Magnetic Resonance Imaging (fMRI), the same tool that is unlocking secrets of the human brain.

“It was amazing to see the first brain images of a fully awake, unrestrained dog,” says Gregory Berns, director of the Emory Center for Neuropolicy and lead researcher of the dog project.

“As far as we know, no one has been able to do this previously. We hope this opens up a whole new door for understanding canine cognition and inter-species communication. We want to understand the dog-human relationship, from the dog’s perspective.”

Key members of the research team include Andrew Brooks, a graduate student at the Center for Neuropolicy, and Mark Spivak, a professional dog trainer and owner of Comprehensive Pet Therapy in Atlanta.

Two dogs are involved in the first phase of the project. Callie is a two-year-old Feist, or southern squirrel-hunting dog. Berns adopted her at nine months from a shelter. McKenzie is a three-year-old Border Collie, who was already well-trained in agility competition by her owner, Melissa Cate. Both dogs were trained over several months to walk into an fMRI scanner and hold completely still while researchers measured their neural activity.

The researchers aim to decode the mental processes of dogs by recording which areas of their brains are activated by various stimuli. Ultimately, they hope to get at questions like: Do dogs have empathy? Do they know when their owners are happy or sad? How much language do they really understand?

In the first experiment, the dogs were trained to respond to hand signals. One signal meant the dog would receive a hot dog treat, and another signal meant it would not receive one. The caudate region of the brain, associated with rewards in humans, showed activation in both dogs when they saw the signal for the treat, but not for the no-treat signal.

“These results indicate that dogs pay very close attention to human signals,” Berns says. “And these signals may have a direct line to the dog’s reward system.”

Berns is a neuroeconomist, who normally uses fMRI technology to study how the human mind works. His human brain-imaging studies have looked at everything from why teens engage in risky behavior to how adults decide to follow, or break, established rules of society.

Dog lovers may not need convincing on the merits of researching the minds of our canine companions. “To the skeptics out there, and the cat people, I would say that dogs are the first domesticated species, going back at least 10,000 years, and by some estimates 30,000 years,” Berns says.

“The dog’s brain represents something special about how humans and animals came together. It’s possible that dogs have even affected human evolution. People who took dogs into their homes and villages may have had certain advantages. As much as we made dogs, I think dogs probably made some part of us, too.”

The idea for the dog project came to Berns about a year ago, when he learned that a U.S. Navy dog had been a member of the SEAL team that killed Osama bin Laden. “I was amazed when I saw the pictures of what military dogs can do,” Berns says. “I realized that if dogs can be trained to jump out of helicopters and airplanes, we could certainly train them to go into an fMRI to see what they’re thinking.”

All procedures for the dog project were approved by the Institutional Animal Care and Use Committee of Emory. “From the outset, we wanted to ensure the safety and comfort of the dogs,” Berns says. “We wanted them to be unrestrained and go into the scanner willingly.”

The dogs were trained to wear earmuffs, to protect them from the noise of the scanner. They were also taught to hold their heads perfectly still on a chin rest during the scanning process, to prevent blurring of the images.

“We know the dogs are happy by their body language,” says Mark Spivak, the professional trainer involved in the project. Callie, in particular, seems to revel in the attention of breaking new ground in science.

“She enters the scanner on her own, without a command, sometimes when it’s not her turn,” Spivak says. “She’s eager to participate.”