A composite image of the star HD 163296. The inner red area shows the dust of the protoplanetary disk. The broader blue disk is the carbon monoxide gas in the system. (Credit: ALMA [ESO/NAOJ/NRAO]/Andrea Isella/B. Saxton [NRAO/AUI/NSF]) 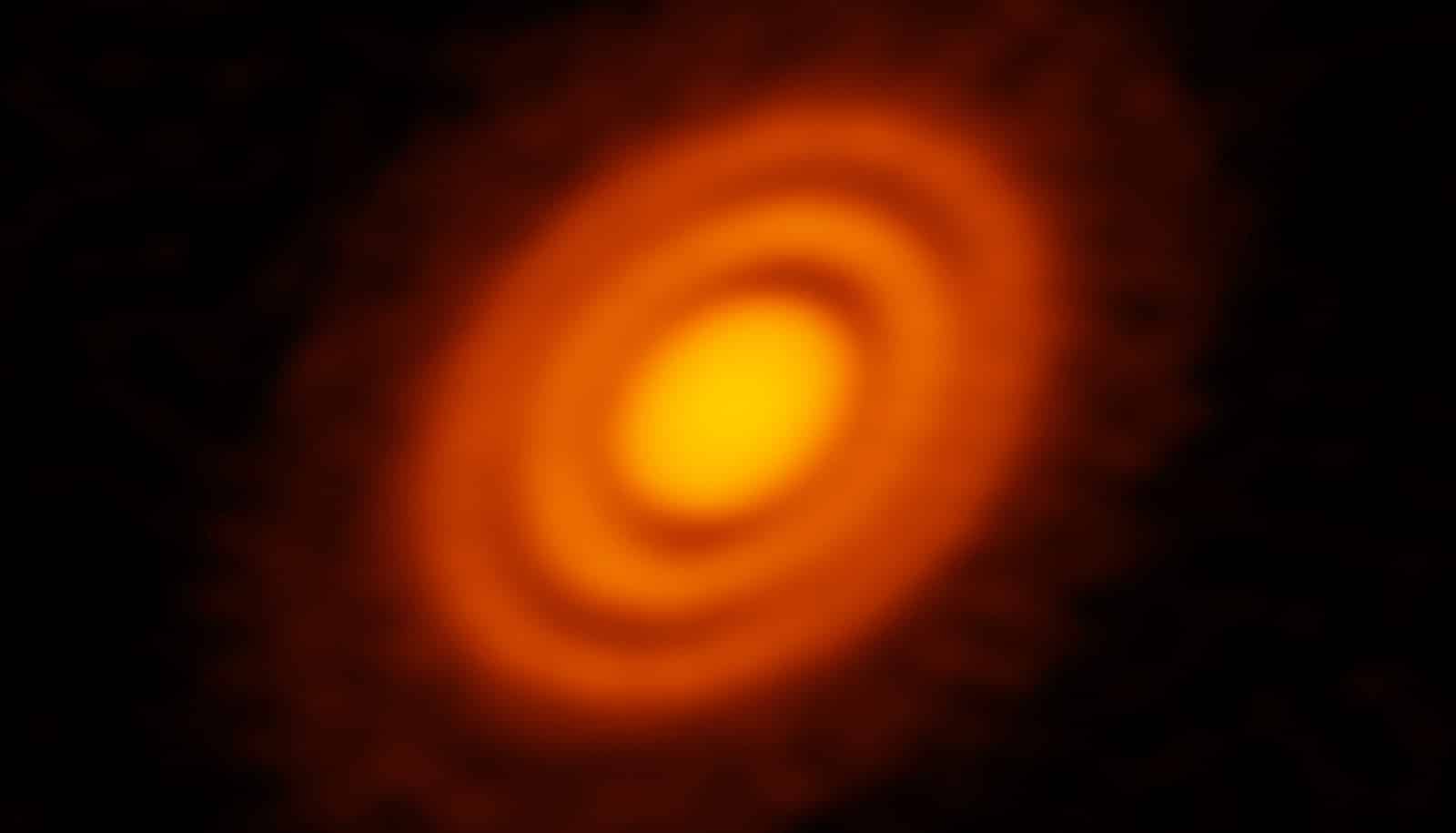 An ALMA image of the star HD 163296 and its protoplanetary disk as seen in dust. (Credit: ALMA [ESO/NAOJ/NRAO]/Andrea Isella/B. Saxton [NRAO/AUI/NSF]) 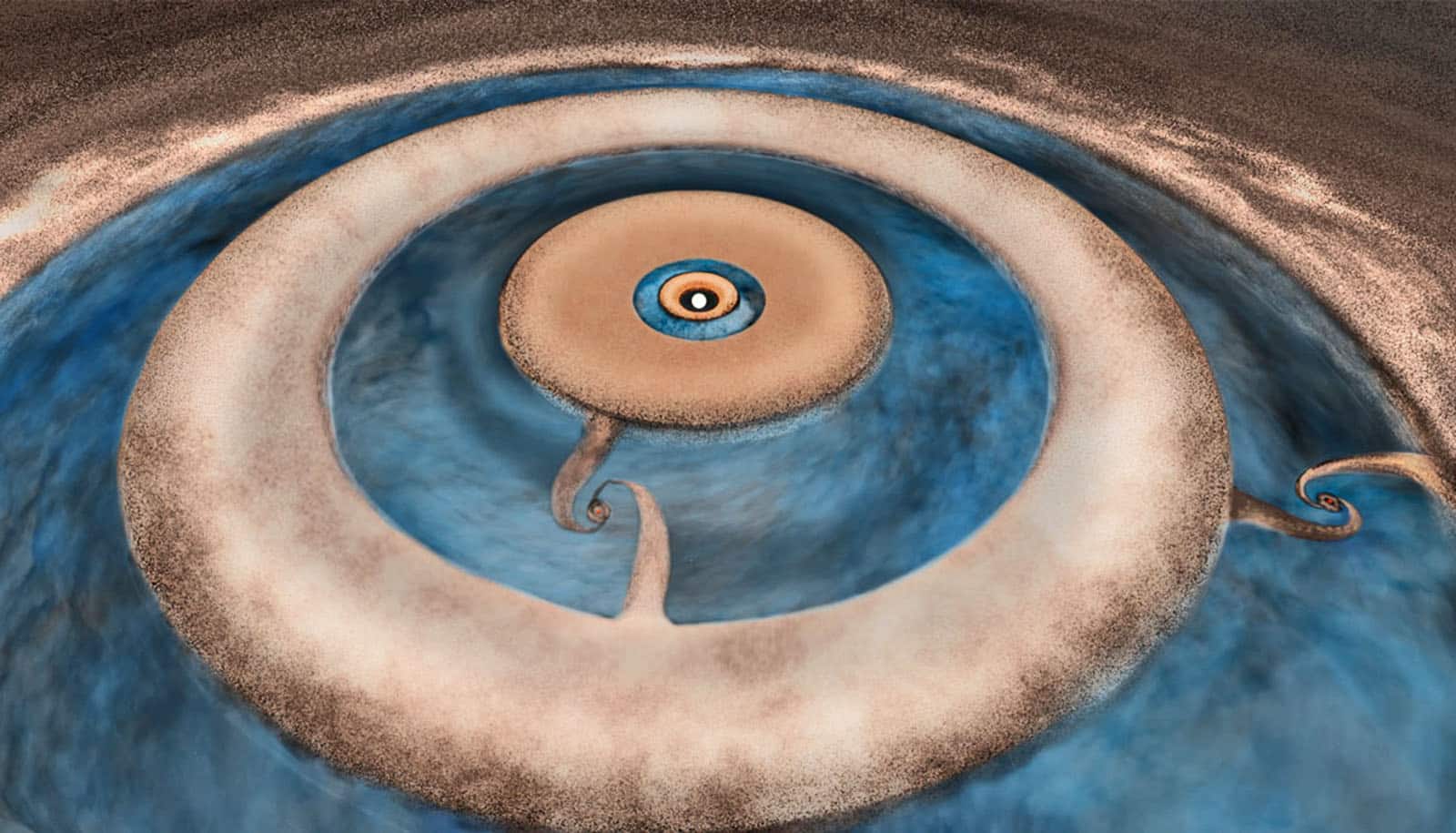 An artist’s impression of the protoplanetary disk surrounding the young star HD 163296. (Credit: B. Saxton/NRAO/AUI/NSF) 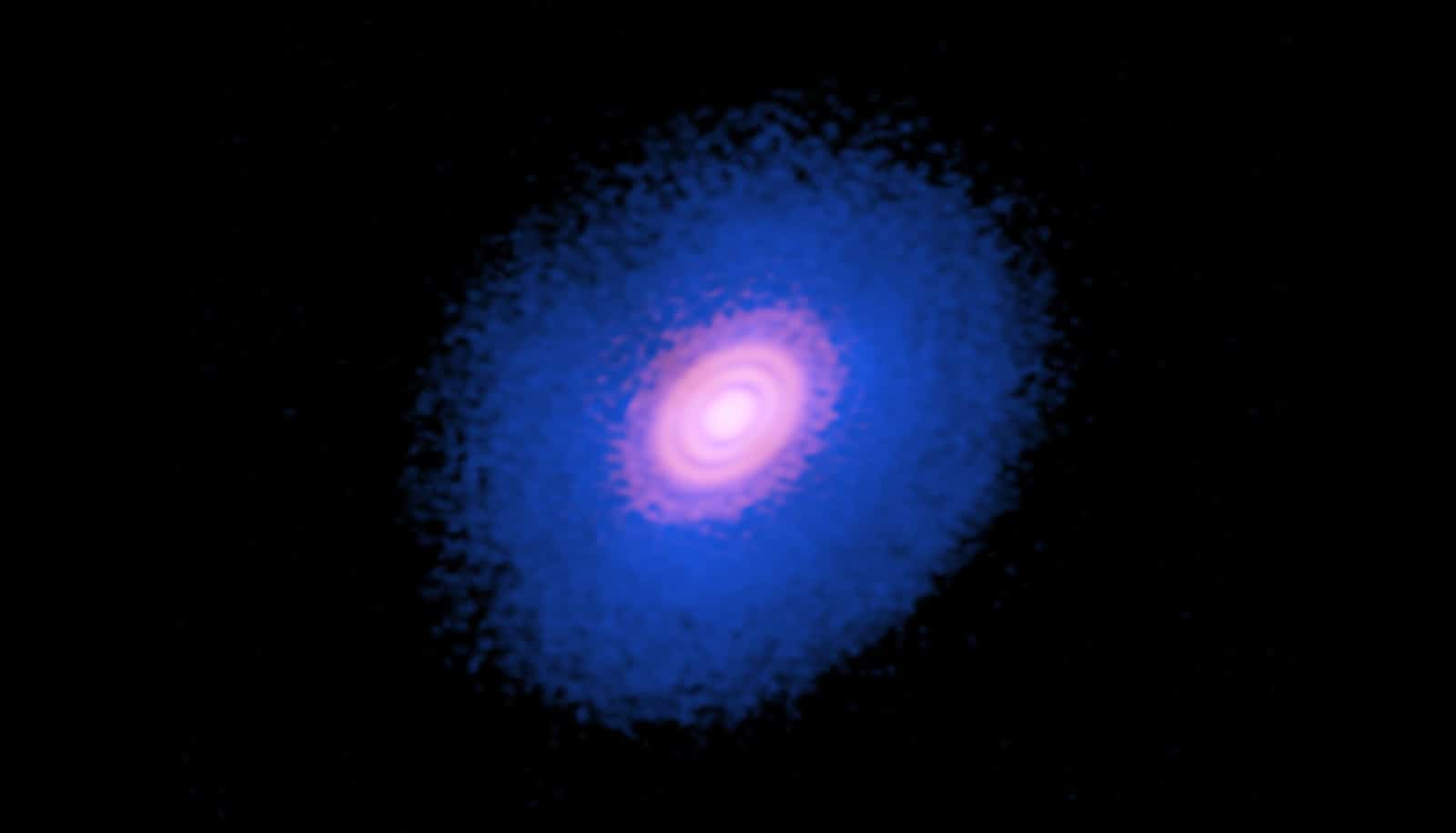 A composite image of the star HD 163296. The inner red area shows the dust of the protoplanetary disk. The broader blue disk is the carbon monoxide gas in the system. (Credit: ALMA [ESO/NAOJ/NRAO]/Andrea Isella/B. Saxton [NRAO/AUI/NSF])
Previous Next

Astronomers have for the first time mapped gases in three dark rings around a distant star. The rings mark spaces where planets are thought to have formed from dust and gas around the star.

“The inner gap is mysterious. Whatever is creating the structure is removing the dust but there’s still a lot of gas.”

All the rings around HD 163296 are devoid of dust, and researchers are sure that planets, probably gas giants with masses comparable to Saturn, are responsible for clearing the outermost ones.

But the inner ring has far more carbon monoxide than the other two, leading them to believe no planet exists there. That remains unexplained, says astronomer Andrea Isella of Rice University, who led the international team.

“The inner gap is mysterious,” Isella says. “Whatever is creating the structure is removing the dust but there’s still a lot of gas.”

The work appears this week in Physical Review Letters.

The search for exoplanets

Only 20 years after the first exoplanet was spotted, astronomers are beginning to learn how planets form. Thousands of planets are now in the database, and scientists continue to improve their ability to analyze them for life-supporting characteristics.

One aim of the Atacama Large Millimeter/submillimeter Array (ALMA) in Chile, the world’s largest radio telescope used in the research, is to study protoplanetary systems. Their mechanics will help scientists understand how the planets like Earth formed. (Radio telescopes detect the unique electromagnetic waves emitted by elements and compounds in space, allowing them to be identified and measured.)

The team’s target star, nearly 400 light years away and best observed from the Southern hemisphere, is one of many known to have a large disk of dust and gas, Isella says.

“Of the material that formed this disk, about 1 percent is dust particles and 99 percent is gas,” Isella adds. “So if you only see the dust, you cannot tell if a ring was formed by a planet or another phenomenon.

“In order to distinguish and really tell if there are planets or not, you need to see what the gas is doing, and in this study, for the first time, we can see both the dust and the gas.”

Evidence that the planets are there

The outer rings are 100 and 160 astronomical units from HD 163296. (One unit is the distance from the center of the sun to Earth.) That’s much farther from the star than previously thought possible for planet formation.

The star is too far from Earth for direct observation of the planets, yet evidence from the new study shows they are likely to be there, clearing dust and gas from the outer rings much like orbiting asteroids called shepherd satellites clear space between the rings around Saturn, Isella says.

The inner ring, 60 astronomical units from its star, showed a much greater concentration of the three carbon monoxide isotopes measured relative to dust.

Wind whips across this exoplanet at 5,400 mph

“Theoreticians have proposed other phenomena that can form dark rings without planets,” Isella says. The researchers suspect one in particular: a lack of turbulence among non-ionized gas molecules in a magnetorotational instability “dead zone” that allows gas and dust to condense into a Saturn-like ring at the edge of the dark zone rather than a planet. The ring may also appear at the carbon monoxide frost line where the gas becomes cold enough to condense.

The results laid the foundation for a new round of observations just starting at ALMA. Isella’s initiative to study 20 stars with protoplanetary disks is one of two “large programs” (from 24 proposals) accepted by the telescope.

“‘Large program’ means that you ask for a lot of telescope time, more than 50 hours,” Isella says. “The other one they accepted will look at the emissions from a galaxy at the beginning of the universe.

“It means our topic is considered by the astronomical community to be one of its highest priorities,” he adds.

Are these rings anamolies?

Isella says the researchers will also return to HD 163296 to learn what other elements are in the disk and rings. Taking inventory will help them determine what kind of a planet might form from material that’s readily available.

“There is the concern that this object and HL Tauri are freaks.”

There is a chance that systems like HD 163296 and HL Tauri, two of the first three (with TW Hydrae) observed by ALMA to show protoplanetary rings, are anomalies, he says. “Now the question is whether all the protoplanetary disks are like this. Do they all have this structure? There is the concern that this object and HL Tauri are freaks,” Isella adds.

Answers should come when the 20-star survey is completed. “We won’t begin to get the data until next September, but it will tell us a lot,” he says.