DUKE (US) — Scientists only knew of one primate that hibernates as a survival strategy—the western fat-tailed dwarf lemur—but it turns out they’re not the only lemurs nodding off.

In a study appearing today in Scientific Reports, researchers report that two other little-known lemurs—Crossley’s dwarf lemur and Sibree’s dwarf lemur—burrow into the soft, spongy rainforest floor in the eastern part of Madagascar, curl up and spend the next three to seven months snoozing underground. 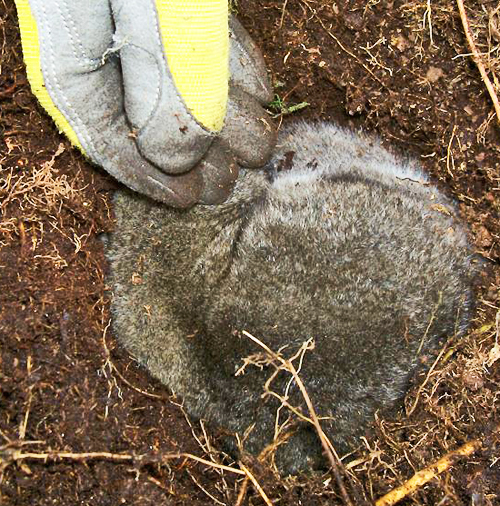 A radio collar led researchers to the underground burrow in the Madagascar forest where this dwarf lemur lay in hibernation, barely breathing. Their pulse drops to 13 beats per minute from their usual 300, and they are cold to the touch. (Credit: Marina Blanco/Duke Lemur Center)

By comparing the hibernation habits of eastern dwarf lemurs and their western counterparts, researchers hope to shed light on what sends hibernating animals into standby mode, and whether lemurs—our closest genetic relatives known to hibernate—do it differently from other hibernating animals.

Unlike animals such as bears and ground squirrels, which hibernate to survive the cold, western dwarf lemurs hibernate to survive during western Madagascar’s long dry season—a time when temperatures top 85 degrees, trees drop their leaves, and food and water are in short supply.

But the hibernation habits of Madagascar’s eastern dwarf lemurs, whose homes include high-altitude forests where winter temperatures occasionally dip below freezing, were poorly known.

To find out more, Blanco and her colleagues trapped and fitted the squirrel-sized animals with temperature-sensitive radio collars before the start of the hibernation season, allowing them to find the lemurs’ underground burrows and monitor their body temperature once hibernation began.

Hibernating animals tend to breathe more slowly, drop their heart rate, and lower their body temperature, becoming inactive for days at a time. Dwarf lemurs are no exception.

“To the casual observer, it looks for all the world as if the animals are dead. Their bodies are cold, they are utterly still and they take a breath only once every several minutes or so,” says co-author Anne Yoder, director of the Duke Lemur Center.

The research suggests that lemur hibernation—and therefore primate hibernation—may not be so different after all. “Maybe these lemurs, though they live in the tropics, look more like temperate hibernators than we thought,” Blanco says.

Lemur researchers are partnering with sleep disorders scientists to study the physiology of lemur hibernation.

7 things you should know about sleep apnea and CPAP